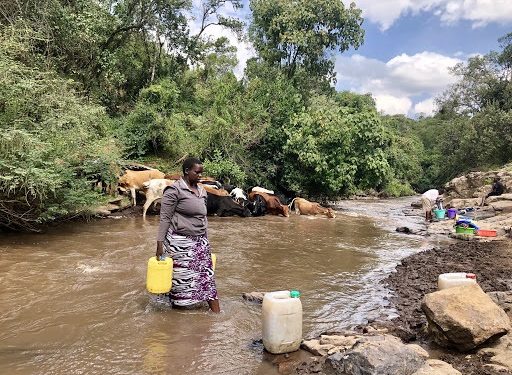 Livestock taking water at a river. A new agricultural policy in Kenya will see the increased use of chemical pesticides and fertilisers which are harmful to human health and the environment. [Photo/ Journal of Sustainability Education]

The Kenyan government and the Ministry of Agriculture have been accused of planning to shift farmers out of agriculture by commercialising the country’s agriculture sector.

Through a new agricultural policy, the country will see the increased use of chemical pesticides and fertilisers among Kenyan farmers. This is despite claims that some of the pesticides used in Kenya are harmful to human health and the environment.

The agricultural sector transformation and growth strategy (2019 – 2029) titled, “Towards Sustainable Agricultural Transformation and Food Security in Kenya” is interpreted as seeking to commercialise Kenya’s agricultural systems which will not only reduce the resilience of local communities to produce more food but also increase the contamination of the country’s natural resources by chemical fertilisers and pesticides.

Read: Why Kenya should withdraw harmful agrochemicals from the market

Claire Nasike, Greenpeace Africa’s Campaigner, says that the use of fertilisers and pesticides not only leads to the persistence of harmful chemicals in the food and the environment but also the loss of biodiversity which poses a threat to the entire ecological system upon which food production depends on.

“The vulnerability of Kenya’s food system has been exposed through the Covid-19 pandemic. The government needs to tap into the local resilience of smallholder farmers who produce more than 75 per cent of the food consumed in the country, to build greater resilience into Kenya’s food system,” Nasike adds.

Agricultural transformation is a decades-long process which involves the modernization of production, shifting production towards more value addition. The strategy notes that agricultural transformation is critical to growing the economy, reducing the cost of food, alleviating poverty and therefore delivering 100 per cent food and nutrition security.

Apart from Singapore and Hong Kong, no country has achieved upper middle-income status without transforming its agricultural sector.

Millions of Kenyan citizens depend on agriculture for income and food security, and the country’s economic growth, therefore, depends on enabling these people to achieve food security and contribute more fully to the economy.

Kenya has taken big strides over the years to build its macro-economic foundations for agricultural transformation: 33 per cent of total GDP, 60 per cent of informal employment and 60 per cent of exports come from the agricultural sector, with the largest contribution coming from crops production.

The country hopes that by transforming the agriculture sector will cement these foundations for economic growth by providing the tools to combat price volatility, improving the environment for private investment, and developing more strategic approaches to lower the country’s dependence on food imports.

Read also: African agriculture: who will own the future?

To make Kenya a regional powerhouse, the Agricultural Sector Transformation and Growth Strategy (ASTGS) was formulated to change the country’s agricultural sector in the belief that food security requires a vibrant, commercial and modern agricultural sector that sustainably supports Kenya’s economic development, national priorities, and commitments to the Malabo Declaration under the Comprehensive Africa Agriculture Development Programme (CAADP), and the United Nations Sustainable Development Goals (SDGs).

The ASTGS prioritizes three anchors to drive the 10-year transformation, with specific targets set for the first five years.

It also seeks to directly benefit 3.3 million Kenyan farming households. The second anchor seeks to increase agricultural output and value-adding to expand agricultural GDP from Ksh2.9 trillion to Ksh 3.9 trillion (6 per cent CAGR). It also seeks to grow the contribution of agro-processing to GDP by Ksh130 billion over 5 years which is a 50 per cent growth from the Ksh 261 billion today.

Anchor three is on increasing household food resilience by reducing the number of food-insecure Kenyans in the ASAL regions from 2.7 million on average to zero while reducing the cost of food and improving nutrition.

While the proposals sound and look good on paper, Nasike says they have far-reaching effects on small-holder farmers and the consumers.

“The Ministry of Agriculture should formulate policies that enable farmers to grow more food sustainably and ensure Kenyans are well nourished by healthy, diverse and safe food. Such efforts will increase farmers’ income, build resilience and break the endless debt cycles caused by over dependency on large quantities of chemical fertilisers and pesticides,” added Nasike.

The importance of agriculture has been highlighted in Kenya through Vision 2030 and the Medium Term Plan III.

Since the country suffers perennial nutritional challenges, it remains to be seen how well it will pull out of the quagmire that is food insecurity that has dogged East Africa’s largest economy for years.