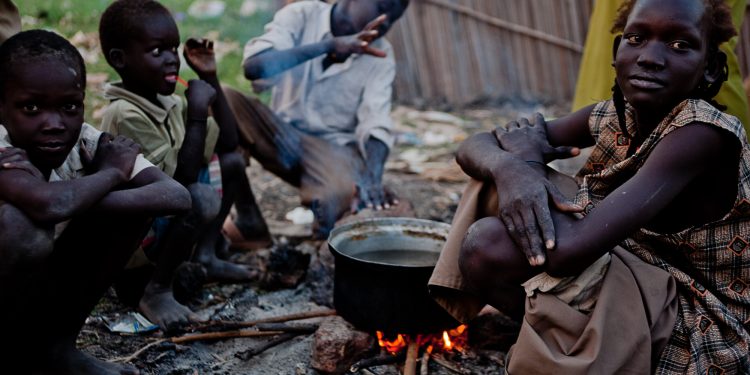 No brakes for the accelerating food insecurity in Africa. [Photo/the borgen project]

War victims are sometimes found away from the battlefield. This is the case with Russia’s brutal invasion of Ukraine. Even as the fighting there causes immeasurable destruction and suffering, it also threatens a silent crisis in Africa.

The conflict has sent the food prices in Africa over the roof, making life further complicated for the 283 million already threatened by hunger within the continent. The war in Ukraine has also laid bare Africa’s unending reliance on food imports. Wheat imports represent about 90 per cent of the US$4 billion Russian-African trade and close to half of Africa’s US$4.5 billion trade with Ukraine. Sanctions against Russia have dealt a blow to grain shipments at a period when universal stockpiles were already experiencing a stretch. This has raised the prospect of mass starvation in a continent that relies on food imports to feed its population.

Read: Africa refuses to be a pawn in US-Russia tensions

If ever there was a moment to raise food production in Africa radically, it is now. The food crisis in Africa has been budding for some time. Climate change has damaged agriculture and disrupted weather patterns, not only in Africa but also in various parts of the world. This has been a significant factor behind soaring food prices, currently at their highest in over 50 years. Apart from war, changes in climate and weather patterns are conceivably the biggest threat to food security globally. A sustainable and long-term solution to allow agriculture to adapt to the warming planet is urgently needed.

In response, African Development Bank has partnered with other entities intending to muster US$1 billion to improve wheat production, among other crops in the African region. The aim is to assist 40 million farmers in raising their production of heat-resistant wheat varieties, soybeans, and rice, among other crops, to feed around 200 million people. Fundamental to these efforts is the need to educate farmers with new tactics that raise their resilience to climate change with strained resources while confronting unpredictable weather patterns, droughts, floods, biodiversity loss, and the spread of pathogens.

All thanks to the Africa Adaptation Acceleration Program, an African-led program launched in 2021 to turn around Africa’s vulnerability to climate change, the Global Center on Adaptation (GCA) and other growth partners are already at work to equip small-scale farmers who produce most of the food in Africa with climate-resilient tactics.

Global Centre on Adaptation projects that investing in weather-proof African firms costs less than 0.1 per cent of the damage caused by climate disasters, including disaster aid, crop losses, reconstruction of roads, and putting farmers back on track. In sub-Saharan Africa, these sunk expenses account for roughly US$201 billion a year, as opposed to the investments required for agricultural climate adaptation, which accounts for roughly $15 billion, according to GCA.

The sub-Saharan African farmers are confronted by the combined hardships of a growing population, malnutrition, and a rapidly changing climate. These farmers will need more nutritious, productive, and resilient crops to confront these hardships. Such change must be implemented promptly and at a scale. In Africa, climate change threatens to eat into 15 per cent of Africa’s gross domestic product (GDP) by 2030, translating to 100 million more people sinking into poverty by this decade’s end.

Protecting Africa’s rich biodiversity is a move toward boosting agricultural production and finding new crop varieties better adapted to hotter and drier climates. Genebanks preserve thousands of crucial plant samples which researchers can use to invent better varieties. Still, for long, their efforts have been curtailed by personnel inadequacy and funds insufficiency, posing a risk to plant collections and tomorrow’s food security.

Norway, in collaboration with the European Union and Crop Trust, runs and funds the BOLD Project tasked with offering technical and financial support to genebanks in Ghana, Ethiopia, Kenya, Zambia, and Nigeria to reach international standards of operation, securing collections and making them available for use in the long run.

With food prices soaring and supplies getting disrupted by conflict, Africa needs to put together as many climate-resilient solutions as possible, promptly and at a scale, to feed off the threat of a disastrous food crisis. Investing in climate adaptation for agriculture is the most brilliant and cost-effective way to guarantee food security in Africa. There should be no more time wastage.