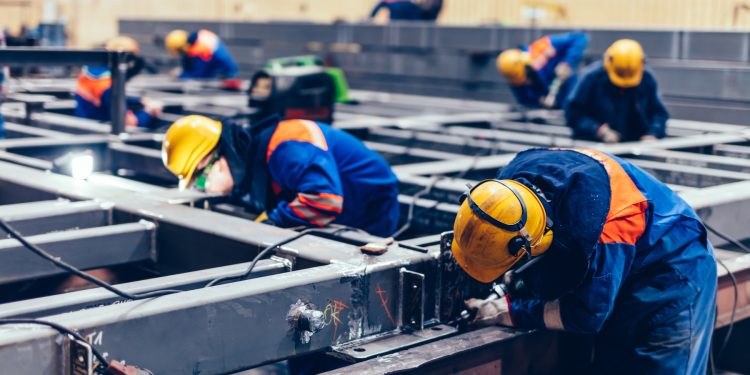 Blue-collar workers at work in a big factory. Heavy industry, labor in shipyard: Photo by Brookings

The pandemic forced most of the countries on the continent to significantly impose lockdowns that crippled financial operations—businesses, mobility, movement within and across national borders, and public gatherings.

The African economy is doing its best to recover strongly from the shackles of the COVID-19 pandemic, which shaved off a substantial amount of growth from the continent’s $2.7 trillion GDP.  Economic recovery in Africa is tough but essential.

While Africa is working its way out of recession and extreme poverty, the region is facing multiple setbacks, such as civil conflicts and the recent Russian invasion of Ukraine, which has caused severe food security in several countries.

The pandemic forced most of the countries on the continent to significantly impose lockdowns that crippled financial operations—businesses, mobility, movement within and across national borders, and public gatherings (Relief Web).

On the other side of the fence, World Bank’s (WB) latest Africa Pulse, a biannual analysis of the near-term regional macroeconomic outlook, estimates growth at 3.6 per cent in 2022, down from 4 per cent in 2021 as the continent continues to deal with new COVID-19 variants, global inflation, supply disruptions and climate shocks.

The Bank argued that Angola and Nigeria are expected to continue their growth momentum in 2022, up by 2.7 and 0.2 percentage points, respectively.

African countries have not been recovering evenly. Some countries have emerged strong and others rather faintly. For instance, in 2021, Egypt stood as Africa’s top investment destination, with Morocco following and South Africa in third place, according to RMB, a division of FirstRand Bank Limited.  Nations such as Tanzania, which had no lockdowns suffered a significant loss in its tourism industry—one of the major employers and top foreign exchange earners.  South Africa has seen a severe rise in unemployment, standing at around 35 per cent in Q4 of 2021.

The Nigeria National Bureau of Statistics and United Nations Development Programme report  NMNM    BV    pointed out that some 20 per cent of Nigeria’s workers lost their jobs to the pandemic.

On the bright side, the pandemic brought a blessing in disguise as more African nations began to rethink critically about handling and addressing serious issues highlighted by the virus—inequality, digital divide, trade relationships, sustainable business models, and fiscal policies.

The recovery process began with African nations working hard to reinforce their public health systems via rolling in vaccines. The process was evident in South Africa, Egypt, Rwanda, Botswana, and Tunisia, to mention a few.

According to a report by Relief Web, governments have sought debt relief, implemented corporate tax deferrals and exemptions, and made direct citizen transfers and interest rate adjustments.

In this context, the Ghanaian government announced the provision of free electricity and water for the periods 2020 and 2021. Further, the United Nations Development Programme (UNDP) supported interventions to help micro, small and medium-sized enterprises (MSMEs) recover from the pandemic and boost job creation.

According to the UNDP, the intervention, focusing on women and youth-led MSMEs, is building on UNDP’s investment in young innovators that included a seed funding of about $500,000 to 42 young innovators to scale up their businesses.

In the Western part of Africa, recovery towards SMEs was featured by inclusivity In the shape of the National MSME Survival Fund, with 60 per cent reserved for women entrepreneurs in Nigeria.

The recovery process of Africa has brought multiple agendas to parliaments that might change the course of investment and development strategies. In most cases, African governments such as Rwanda and South Africa are eyeing various opportunities for green investments.

The African Union Green Recovery Action Plan exemplifies how the region is building on the green economy foundation. Renewable energy investment at utility and minor scales are also being attracted in nations such as Egypt and Morocco.

The WB pointed out that excluding Angola, Nigeria and South Africa, regional growth is projected at 4.1 in 2022 and 4.9 per cent in 2023.

Recovery for the region should be a second chance for the African countries such as Ghana, Egypt, Kenya, Tanzania and Rwanda who were on healthy economic trajectories to reinforce their economic systems well.

The latter is substantiated by Relief Web, arguing that “Sub-Saharan Africa must not aim to bounce back to the unsustainable forms of development it pursued before the pandemic. A new trajectory requires a new development deal for the region”.

This argued deal needs to be green, yes. But it also needs to be transparent, fair, and realistic to tackle the scale and depth of endemic development challenges (Relief Web).

Africa exhibits all potential signs to rise to the top. The waves of economic challenges that have shaken the region’s economies can only be managed if the region builds safety nets to enhance economic resilience and responsiveness to shocks.

Opinion: Why women in Construction matter