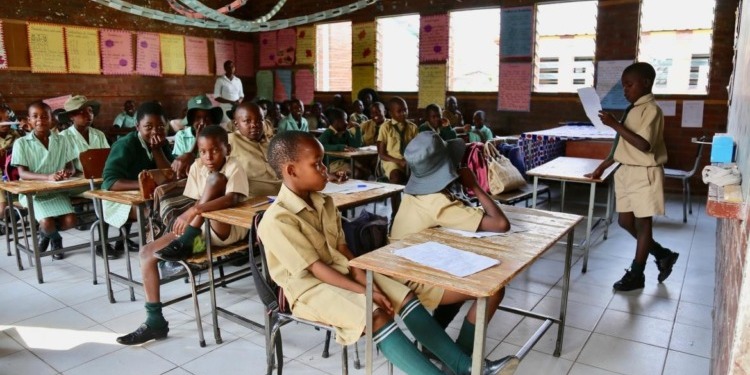 Pupils in class in Zimbabwe. Rwanda is targeting Zimbabwean teachers to teach the East African nation. [Photo/Global Partnership for Education]

Teaching professionals are keen to pursue opportunities in the small East African nation.

President Paul Kagame of Rwanda recently made remarks at the Rwanda Zimbabwe Trade and Investment Conference to the effect that his country would be happy to hire and absorb teachers from the southern African country.

The Rwandan leader’s comments set mainstream and social media on fire and divided opinions on the matter. Teaching professionals are keen to pursue opportunities in the small East African nation which has one of the fastest rates of economic growth on the continent.

“Before equipment, I want people… I think Zimbabwe can offer us good teachers. So please work on that as a sense of urgency … You can find whatever number you find of quality teachers. I think we can absorb.”

Opportunities for work in a well-functioning country will provide some welcome respite to long-suffering teaching professionals who have had a torrid time in their native country and have had to contend with poor salaries and working conditions.

Zimbabwean teachers currently are said to be demanding salaries of up to US$580.00 in a declining economic environment where a family of six is said to require no less than ZWL$40,000.00 (US$ 449) per month to provide for its expenses according to Zimbabwe National Statistics Agency (ZIMSTAT). The poverty datum line is increasing steadily and regularly in Zimbabwe.

The poverty datum line is a technique for describing the theoretical minimum cost of living. It estimates the lowest possible cost for maintaining a household in health and decency under ideal conditions, in the short run only.

A rising poverty datum line implies that professionals like teachers in this instance would be highly likely to emigrate should compelling opportunities like the kind offered by Rwanda present themselves.

Zimbabwe’s education sector is highly regarded worldwide and as far back as 2011, the country had a 97 per cent literacy rate of people above the age of 15. The difficult economic times in Zimbabwe have meant that there is little to nothing in terms of opportunities for Zimbabwean professional talent in general with teachers and healthcare workers specifically involved in engagements with the government over better working conditions.

These engagements have often turned acrimonious with devastating and unfortunate consequences. In a very strange turn of events, the government is said to have offered striking medical and healthcare workers access to free Wi-Fi internet as an incentive for them to come back to work.

With this background in mind, the opportunity for work in Rwanda seems to be one that cannot be passed up for hard-pressed Zimbabwean teachers and it would not be a surprise if all of them made a bee-line for the Rwandan president’s door.

From the perspective of the individual Zimbabwean teacher, this is a welcome development. They will have the chance to work in a country that is – as previously stated – functional, earn a decent income that they can live on and be able to plan for theirs and their respective families’ future—something that is not practical in the Zimbabwean context.

What does this mean for the Zimbabwean education sector in the broader context?

State news media outlets wasted no time putting a positive spin on the development calling it “a major step in cementing relations and outcomes…” They went further to report that Zimbabwe and Rwanda had signed several agreements which would be “operationalized” in the coming weeks. A different state-owned news outlet reported that the government was excited to collaborate with Rwanda on what it described as the “exportation” of teachers citing countries like China and Cuba that produce large numbers of skilled professionals who work as expatriates in other countries.

According to the paper in question, government reasons that the expatriate teachers seconded to or who emigrate to Rwanda would earn foreign currency which would then be taxed and repatriated back to Zimbabwe.

The paper did not specify the practical aspects of how that would be executed and achieved.

The prospect of Zimbabwean teachers flocking en-masse to Rwanda should be a cause for concern and not anything to be celebrated. This opportunity, even though good and needed, could very well lead to brain drain when the bulk of teachers leave the country for the eastern African nation leaving little to no skills or talent in the Zimbabwean education sector. It is not impossible for this to happen.

The brain drain problem refers to the situation where a country loses its best workers. For example, skilled workers in developing countries such as India or Pakistan may be attracted by better rates of pay and working conditions in developed countries, such as the US and Western Europe.

Investopedia puts it this way, “Brain drain causes countries, industries, and organizations to lose a core portion of valuable individuals. The term often describes the departure of groups of doctors, healthcare professionals, scientists, engineers, or financial professionals. When these people leave, their places of origin are harmed in two main ways.

First, expertise is lost with each emigrant, diminishing the supply of that profession. Secondly, the country’s economy is harmed because each professional represents surplus spending units. Professionals often earn large salaries, so their departure reduces consumer spending in that region or the country overall.”

Zimbabwe has been experiencing massive brain drain from the turn of the century characterized by the mass exodus of highly trained and skilled professionals for other countries namely South Africa, the United Kingdom (a preferred destination by most healthcare workers), the USA, Australia, and Canada. This has had adverse consequences for the local economy as can be expected. Generally, it is not desirable for a country to experience brain drain or human capital flight in an economy for the following reasons:

It is for these and other reasons that human capital flight should be dealt with wisely. The migration of skilled labour in search of better opportunities is not all bad. There are some benefits. Workers who emigrate to other countries will learn and develop new skills which they will put to good use should they return to their home country. The other benefit is that migrant works will often send money back to their families at home which in turn can stimulate the economy. Zimbabwe’s economy has stayed afloat because the country earns a considerable portion of its foreign exchange from diaspora remittances.

According to monetary authorities, the country received no less than US$1 billion in diaspora remittances in 2020.

Before policy-makers take a stance on the Rwandan proposition, they need to consider the current plight of teachers in the country. They need to take stock of the stock of talent and skills in the education sector before permitting the migration of teachers to the development of another country at the expense of its own citizens.

Every effort needs to be made to restore the education sector which together with every other social services sector has been in turmoil from the turbulent economic environment. Should that occur Zimbabwe will see that its pool of teachers is a resource that it cannot afford to part with especially when that country’s economy returns to a growth trajectory.

Read: A service economy the road to transforming Zimbabwe’s economy