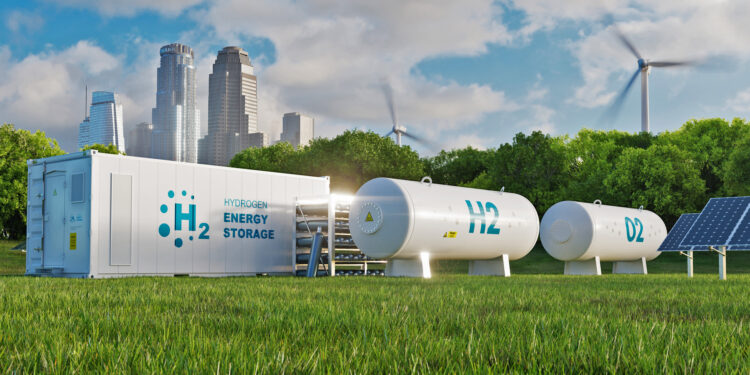 3D rendering of a concept of an energy storage system based on electrolysis of hydrogen in a clean environment with photovoltaics, wind farms and a city in the background. [Photo/ UN]

There’s a lot of hype around hydrogen today.

Arguments are being raised as they say it is the most abundant element, a silver bullet and key to unlock all our future energy needs.

According to WeForum, the Green Hydrogen Catapult, a United Nations initiative to bring down the cost of green hydrogen announced that it is almost doubling its goal for green electrolysers from 25 gigawatts set last year to 45 gigawatts by 2027.

The European Commission has adopted a set of legislative proposals to decarbonize the EU gas market by facilitating the uptake of renewable and low-carbon gases, including hydrogen, and to ensure energy security for all citizens in Europe.

The United Arab Emirates is also raising ambition, with the country’s new hydrogen strategy aiming to hold a fourth of the global low-carbon hydrogen market by 2030 and Japan recently announced it will invest US$3.4 billion from its green innovation fund to accelerate research and development and promotion of hydrogen use over the next decade.

While other African countries such as Morocco and Namibia have already positioned themselves as potential hydrogen producers. In 2021, Namibia announced an estimated US$9.4 billion green hydrogen project, scheduled to enter production in 2026. The initial target is to generate 2 gigawatts of renewable electricity for regional and global markets.

The US$8.5 billion promised at the United Nations Climate Change Conference in Glasgow (COP26) to support South Africa’s Just Energy Transition Partnership to a low-emission development path specifies a goal to “develop new economic opportunities such as green hydrogen.”

In February 2022, South Africa announced plans to support a pipeline of green hydrogen projects worth about US$17.8 billion over the next decade.

According to Further Africa, South Africa has now set its eyes on attracting as much as US$250 billion into its green hydrogen industry by 2050 to take advantage of abundant solar and wind energy sources.

Masopha Moshoeshoe, a green economy specialist in the South African Presidency’s investment and infrastructure office, says the industry could create 1.4 million jobs and generate as much as US$30 billion in annual revenue by that year.

Moshoeshoe presented the plan at the Monday COP27 international climate conference in Egypt. It involves South Africa exporting as much as eight million tons of clean-burning fuel and its derivatives by 2050 and satisfying local demand of between two and five million tons.

He said that Russia’s invasion of Ukraine has increased interest in supply and created more opportunities for cooperation.

A number of bilateral negotiations are taking place between South Africa and potential markets, according to Moshoeshoe.

The war has driven up natural gas prices and threatened the security of supply. Investment funds, governments and utilities are pledging to spend billions of dollars on markets for clean fuel.

The potential is for the country to supply between 4 per cent and 8 per cent of the global market for ammonia, which is produced using hydrogen, with a focus on supplying South Korea and Japan, he said.

Between 140,000 megawatts and 300,000 megawatts of renewable-power generation capacity would be needed to supply the industry, compared with the country’s current total power facility capacity of a little over 40,000 megawatts, the presentation showed.

By 2030 alone, between 6,000 and 10,000 megawatts of dedicated renewable energy plants would need to be built to power 3,000 to 5,000 megawatts of electrolyzer capacity, according to figures shown in the presentation. Electrolyzers use electricity to make hydrogen from water.

Green hydrogen production technologies are seeing a renewed wave of interest. This is because the possible uses for hydrogen are expanding across multiple sectors, including power generation, manufacturing processes in industries such as steelmaking and cement production, fuel cells for electric vehicles, heavy transport such as shipping, green ammonia production for fertilizers, cleaning products, refrigeration, and electricity grid stabilization, according to the World Bank.

South Africa possesses exceptional conditions for the development of a competitive green hydrogen industry due to its geographical and institutional environments, giving it the potential to become a development pole at the national and regional levels.

The country has abundant solar and wind resources at very competitive prices and a proven path for developing innovative technologies in renewable energy. Furthermore, the mining industry could help to scale-up green hydrogen, making it even more competitive in the medium- and long-term. These conditions, coupled with a conducive environment for public-private partnerships and leveraging of private sector resources, are comparative advantages for the development of this industry in South Africa.

You might encounter the terms ‘grey’, ‘blue’, and ‘green’ being associated when describing hydrogen technologies. It all comes down to the way it is produced.

Green hydrogen is defined as hydrogen produced by splitting water into hydrogen and oxygen using renewable electricity. This is a very different pathway compared to both grey and blue, according to WeForum.

Grey hydrogen is traditionally produced from methane (CH4), split with steam into CO2 and H2, hydrogen. Grey hydrogen has increasingly been produced also from coal, with significantly higher CO2 emissions per unit of hydrogen produced.

Blue hydrogen follows the same process as grey, with the additional technologies necessary to capture the CO2 produced when hydrogen is split from methane (or from coal) and stored for a long term.

In a related article by WeForum published on August 10, 2022, green hydrogen’s high production costs are hampering its industrial application. For instance, although the steel and chemical industries are major hydrogen users, many companies are reluctant to shift to green hydrogen. Under the present market conditions, higher-priced green products are competing against established lower-priced grey options, particularly in capital-intensive sectors with low-profit margins.

They further recommended that a multi-faceted industrial policy is needed to facilitate the emergence of green hydrogen as a breakthrough technology in a world that is heavily locked into fossil fuel-based technologies.