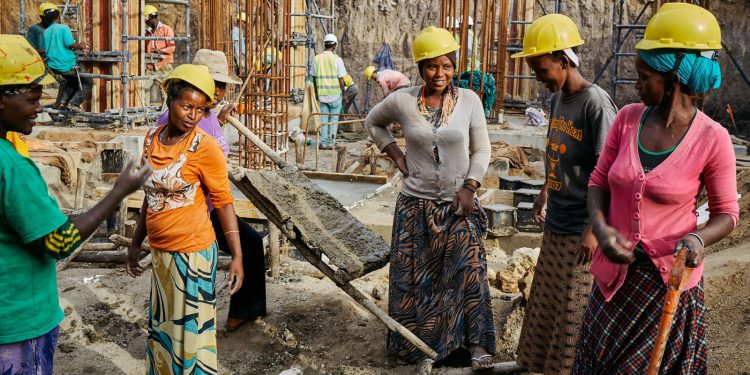 Women are essential in championing sustainable development goals from an inclusive angle: Photo by AfDB

Africa Continental Free Trade Area (AfCTA) is a one of many tools Africa uses to realise sustainable development goals across major sectors.

Follow the numbers they say, if one wants to understand how Africa can go beyond the typical growth trajectory that does not commensurate with its natural capital and human potential to attain economic freedom. Sustainable development is rather crucial for Africa to attain. On that note, efforts such as Africa Continental Free Trade Area (AfCTA) are a tool the region employs to breathe life into that ambition.

Numbers point towards an exciting viewpoint that questions whether Africa can sustain its economic growth without adopting the best available, sustainable economic systems.

The region has been keeping a good track record over the past years. For instance, Tanzania—has become one of the fastest-growing economies in Africa—ascending towards a low-middle-income status and staying on top of the COVID-19 pandemic and also contributing to the top fifteen list of African billionaires with Mohamed Dewji.

Attaining economic freedom is the new normal. African nations such as Kenya and Ghana are capitalizing on their agricultural and industrial potential to increase output value and investment.

Rwanda, a small East African country, is blurring the lines of underperformance as it builds up its ICT ecosystem and extends its tourism reach and foreign direct investment (FDI).

On that note, it will not be shocking if in the next decade, one of these nations emerges to become Africa’s richest country as it strives to attain economic freedom.

According to Borgen Project, a US-based organization, a slew of situations taint Africa’s stride towards prosperity. The organization noted that United Nations stats show foreign investment contracts in Africa have seized nearly 50 million acres of land, which adds more pressure to land issues as it is argued that most land is unattainable.

While that is happening, inequality is eating away at inclusion potential and downplays human labour and aspirations for growth—personal and sectorial. Despite contributing to 90 per cent of work and representing nearly 70 per cent of the workforce in agriculture, women lose access to lands they toil on during marital problems—particularly after being widowed.

However, with the prevailing situation choking life out of communities’ agricultural systems, Africa has to grapple with the fact that its population could be a threat or a potential—depending on the circumstance laid down to exploit it.

Africa’s population will double by 2050 and quadruple in 2100, complicating food security systems which sparks starvation while limiting wealth creation.  By 2019, Africa was the second most unequal continent in the world. Oxfam reports pointed out that the region is home to an unequal country—South Africa—where 10 percent of the population owns 80 percent of the wealth.

Unlike other regions with welfare systems shielding underprivileged populations, Africa is struggling to contain its unemployment problem as top economies, Nigeria and South Africa, lead with top unemployment rates. The past two years has skewed the trajectory of growth for Africa’s unstable economies as the pandemic led to increased poverty levels in Africa.

The UN Conference on Trade and Development (UNCTAD) pointed out that in 2019, at least 478 million people dwelled in extreme poverty. Still, in 2021 that number grew to 490 million—this being 37 million more people, shying away from the projection marked before the pandemic.

Africa can either take the sustainable route to economic success or keep lingering in the traditional economic models that have proven to deteriorate natural capital ecosystems and extend the lines of inequality and exclusion.

This can be achieved by deploying transformative strategies from various angles. However, industrialization and infrastructure sectors seem to hold more influence and impact—as both sectors overlay sustainability.

Brookings, a US-based think-tank, argued that Africa hosts more than 400 companies that earn annual revenues of $1 billion or more which is relatively higher than their global peers. The think-tank points out that manufacturers can ramp up growth in the sectors considered essential and life-lines to economies, from food production to automobiles.

Kenya, Tanzania, Ghana and Nigeria are showing by example why industrialization is essential for attaining economic freedom. These nations have transformed their economic diplomacy tone to fetch more FDIs for their individual national economies.

Tanzania’s President Samia Suluhu Hassan exemplifies this as she has managed to draw investment deals from the US, Oman and neighbouring East African counterparts, Uganda and Kenya.

Ghana and Kenya are championing manufacturing on an automotive scale. These two nations are showcasing the true definition of African industries.  Kenya’s automotive industry is primarily based on the assembly, retail and distribution of motor vehicles.  At the same time, Ghana’s transformative Kantanka Automobile Company Limited assembles the Kantanka line of the vehicles from entirely knocked down (CKD) kits from China.  Both nations demonstrate enough commitment and evidence that industrialization is a must, and numbers from Brookings back up their statistics.

“African industries have the opportunity to double production to nearly $1 trillion within a decade. Three-quarters of that growth will likely come from manufacturing to substitute imports and meet burgeoning local demand. But there is also an important opportunity to grow manufacturing exports and make Africa the world’s next great manufacturing centre as industries shift away from China to lower-cost regions,” Brookings argued.

Industrialization will not only put Africa on a sustainable trajectory but will cut down its imports bill, which shockingly comes in at about $35 billion a year on foodstuff imports alone. The region must develop its own pharmaceutical, electronics and computer industries to run down its imports bill which drains resources from its coffers. On that note, African industries are inevitable for attaining sustainable development over time.

Meanwhile, the rest of the world, especially the top industrial economies and greenhouse gas emitters is considering and lobbying about moving away from traditional manufacturing modes that contribute to climate change.  For starters, Germany and Japan are now strategizing acts and laws on sourcing their energy needs from renewable sources such as wind, solar and nuclear plants in the coming years.  According to a government draft paper acquired by Reuters in February 2022, Germany, plans to source 100 percent of its energy from renewable sources.

Africa has the potential and ability to realize green technologies. This is demonstrated on a small to medium scale in Kenya, Ghana, Tanzania, Nigeria, South Africa, Egypt, Morocco and Rwanda on various crucial aspects such as waste-to-energy, harnessing solar energy, recycling and waste management, and wastewater treatments.

This sector’s underperformance does not only mar the region’s ability to expand its reach in pumping out more outputs such as farm produce due to inefficient transport and storage facilities.  It also undermines rural communities’ abilities to deploy local problem solutions.

The African Development Bank argues that investment in infrastructure accounts for over half of the recent improvement in economic growth in Africa and can achieve more, a crucial attempt for Africa to attain economic freedom.

Numbers show that Africa’s infrastructure systems can attract growth and benefit outputs. Unless appropriate structures are established, the internet economy can only contribute to Africa’s GDP and ramp up growth by 5 to 6 per cent by 2025.

Forbes list of African billionaires kicks off with Aliko Dangote dominating the list from the manufacturing industry.

While the rest of the region’s wealthiest people source their economic freedom from entertainment, mining, metals, telecom, food and beverage and other diversified industries, one thing stood out – they all obtained their wealth from functioning African economic systems proving the region can do much more to enhance its economic welfare.

Read: Intra-African trade to grow in billions for the Continent