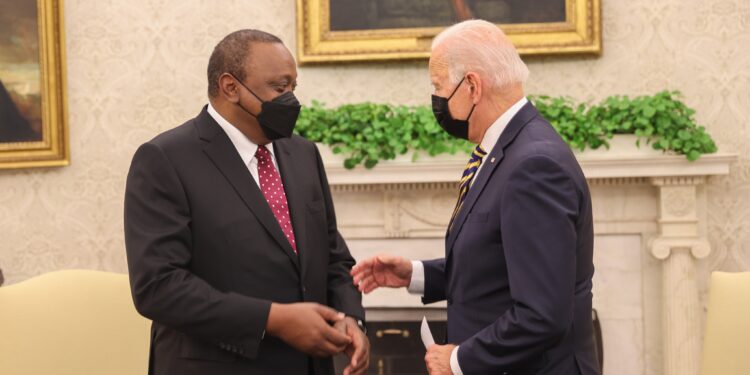 President Biden's administration had previously asked for the goals of the bilateral partnership to be checked into to realize his intention.

There has been no response from the US on the future of a free trade arrangement after discussions were held between trade executives from both America and Kenya this week.

Statements were given by Betty Maina (Trade Cabinet Secretary in Kenya) and Katherine Tai (US Trade Chief) in a virtual conference last Tuesday fail to provide a timeframe after which halted talk on the deal will resume, indicating a continuous deadlock.

The lag by Joe Biden’s government to close the deal has seen an ever-rising unease in Nairobi. There has been an emphasis, however, between Nairobi and Washington on enhancing trade pacts between the two states.

The two ministers gave their views during the virtual conference on how to advance economic and trade relationships between their countries.

Ambassador Katherine Kai released a statement complimenting Kenya’s key leadership stewardship in Africa and emphasised the US government commitment to intensify the reciprocal US- Kenya relationship.

The statement continued that the two trade ministers counselled their teams in identifying “productive avenues” to important issues aimed at aligning the developing partnerships to the “trade policy centred to the workers in the US- Kenya trade and investment partnership” while concurrently commenting on the economic and trade relationships between Kenya and the US.

Ambassador Katherine and CS Maina pledged to continually engage and corporate on areas of reciprocal interests in the US- Kenya relationship, inclusive of change in climate, vaccine accessibility and creation of regional alliances.

President Biden’s administration had previously asked for the goals of the bilateral partnership to be checked into to realize his intention, with some of the negotiations set by Trump’s government ready to do with.

Last Wednesday saw President Biden nominate Margaret Whitman (former CEO of ICT firm Hewlett Packard and eBay) as the ambassador of the US to Kenya, a nomination that follows unrest in Nairobi about the US government reluctance to complete the free trade arrangement with Kenya.

The US- Kenya free trade agreement, the first free trade deal of the US in sub-Saharan Africa, comes out at a time when China is seen to be highly investing across Africa. The US attempts to cut China’s growing influence on the global trade market.

Kenya aims at striking a deal with Washington ahead of the Africa Growth and Opportunity Act (Agoa) expiry, which grants states in Sub-Saharan Africa the go-ahead to export products to the US in thousands free of quotas and tariffs until 2025.