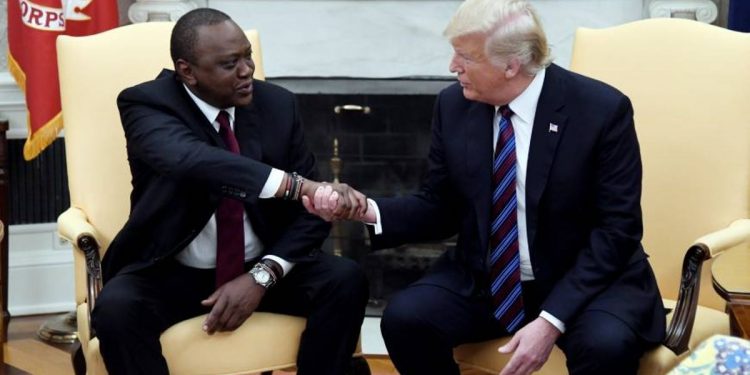 Presidents Uhuru Kenyatta (L) and Donald Trump during a meeting at the White House. An FTA signed in February 2020 is the first of its kind between the United States and a Sub-Saharan African (SSA) country. [Photo/White House]

East Africa’s investment hub, Kenya, exported US$568.9 million worth of goods to the United States in 2020 while the US exported US$370.8 million of products to Kenya in the same period.

Cumulatively over the last decade, the two countries have exchanged over US$1 billion in annual trade while Kenyans have received in excess of US$1 billion annually in remittances from the diaspora in the United States.

The signing of a free trade agreement (FTA) in February 2020 could be what improves the two countries’ trade relationship even much further. This FTA is the first of its kind between the United States and a Sub-Saharan African (SSA) country.

Launching these negotiations was to help conclude a comprehensive and reciprocal FTA announced by US President Donald Trump and Kenya’s President Uhuru Kenyatta, and marked an important development in recent US engagement with Africa.

A report launched in April 2021 on the US-Kenya trade negotiations analysing the implications for the future of the US-Africa trade relationship shows that if successful, the FTA would represent the most significant innovation in US-African trade relations since the enactment of the African Growth and Opportunity Act (AGOA) trade preference programme in 2000.

With a new administration taking over in the US following an election where Trump lost to President Joe Biden, an agreement has yet to be reached. This presents the Biden administration with a decision on whether to continue negotiations with Kenya.

If successfully concluded, the FTA would undoubtedly signify an important shift in US trade policy in the region.

The report notes that by adopting a reciprocal approach toward market access and other trade issues, the negotiation of a bilateral FTA between the United States and Kenya will have important ramifications for unilateral programmes like AGOA, which was in fact intended to be a stepping-stone to a more mature US trade relationship with African countries when it was developed over 20 years ago.

The AGOA is set to expire in 2025 and this makes the signing of the FTA auspicious.  Again, the proposal comes at a time when members of the African Union (AU) were working towards implementing the African Continental Free Trade Area (AfCFTA).

A collaboration between the American Chamber of Commerce Kenya (AmCham Kenya), Covington, and the US-Africa Business Centre at the US Chamber of Commerce, the report U.S.-Kenya Trade Negotiations Implications for the Future of the U.S.-Africa Trade Relationship seeks to understand the future of a US trade policy with Kenya—and with Africa in general.

The FTA is a crucial issue with which the Biden administration and Congress must grapple especially with the reality that competition for business in Africa is heating up and US firms cannot just sit on their laurels since China, Europe and others are already jostling for space on the continent.

With the potential challenges and benefits of an FTA between Kenya and the United States, the study also considers the implications of the US-Kenya FTA with respect to AGOA, and takes into account the recent impacts of the Covid-19 pandemic on trade.

The report has identified several priorities for an FTA between the United States and Kenya which include increased predictability where the FTA is expected to introduce more predictability in the US-Kenya commercial relations, mitigating the uncertainty associated with the annual eligibility review process under AGOA.

A comprehensive high-standard FTA also contains obligations relating to transparency, anti-corruption, good regulatory practices, and government procurement, which could improve the business environment in Kenya and encourage more US investment into the country, according to the study.

Engaging Small and Medium Enterprises (SMEs) is another priority where both countries want to promote economic opportunities for small and medium enterprises in their respective countries. The United States has included chapters in prior FTAs that seek to promote and facilitate the participation of SMEs in international trade, while Kenya hopes the FTA will lead to the creation of “decent jobs and sustainable livelihoods” generated by a growing economy.

Another expectation is that the FTA will expand reciprocal access. The FTA, when implemented, would inject reciprocity into the US-Kenya commercial relationship, which would make US goods and services more competitive with products from Europe that currently receive preferential treatment under the Economic Partnership Agreements (EPAs). It would also be a signal to China of Kenya’s interest in diversifying its commercial relationships.

The Covid-19 pandemic has shown that facilitating digital trade is key. Governments and populations have increasingly sought to use digital options and contactless alternatives to ensure business continuity while maintaining social distancing showing the economic importance of digital trade. Digital trade is a key condition for ensuring inclusive economic growth through trade, including for SMEs and other businesses across various sectors such as agriculture, infrastructure, and health. They also underscored the role high-standard digital trade disciplines play in creating certainty for businesses navigating the fast-changing and increasingly complicated web of laws, regulations, and standards that contribute to global data governance.

Other aspects include tackling the trade in genetically modified organisms (GMOs) and Kenya has imposed a ban on most imports of GMOs, including feed imports and food. This has been an obstacle for agricultural trade between the United States and Kenya and has also disrupted trade to other parts of the continent.

There is also the need to improve intellectual property protections, enhancing transparency, capacity building and enforcement. Progress in these areas will improve the overall business environment in Kenya, and will also align with Kenyan policies that seek to address illicit trade, which is a key challenge for companies doing business in the Kenyan market. Technical assistance will likely be key to addressing these issues and may require the United States to consider measures that incorporate robust trade capacity building in the final agreement.

Since over 70% of Kenyan exports to the United States are covered by AGOA, there is a need to preserve AGOA benefits.

Kenyan decision-makers, according to the study, will want to maintain this access in trade negotiations with the United States. At the same time, US negotiators will seek to ensure that any agreement contains adequate reciprocal market access.

It must be nuts! The case of Africa’s cashews

Understanding the emerging economy of Kenya