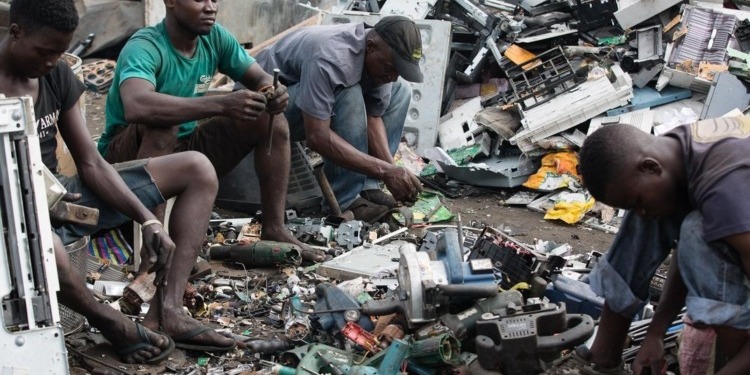 Workers at an e-waste dump in Agbogbloshie, Accra, Ghana. Africa should say no to all forms of dumping including second hand equipment. [Photo/SciDev]

In Africa, exporters dump their wares to compete with African producers and sellers.

For decades, Africa has suffered from dumping where low priced goods are sold as a way of profiting from what would not otherwise be sold in the country of origin.  The irony is that the commodities dumped in Africa cannot be used or resold in their countries of origin due to various reasons.

The goods that are usually disposed of this way in Africa include vehicles, heavy machinery, electronics, clothes and sometimes foodstuff. In the case of vehicles and electronics, most of these are sold in the second-hand or used items market.

In the financial world, dumping is defined as selling something at a lower price than its domestic price. In Africa, exporters dump their wares to compete with African producers and sellers. In some cases, the dumping is enabled by the demand to satisfy a certain need like mobility in the case of second-hand vehicles and technology access in the case of used electronics.

If there is anything that Africa should gain from the Covid-19 pandemic, it should be the ability to create its own solutions to its market needs. As we have seen with the vaccines apartheid, Africa can only grow if it puts in place measures to address its most immediate needs even as it builds value chains for posterity.

The pandemic shows that times are changing and it is important that Africa changes its stance on used items from western nations. Africa should stop being the world’s dumpster by saying no to these imports.

Africa’s used clothes business is enormous with Kenya, Uganda, Tanzania, Ghana and Benin accounting for most of the used apparel sales on the continent. Globally, these five African countries make up the world’s biggest market for used clothing.

Used clothing sales in Africa are driven by demand rather than supply. Many people in sub-Saharan Africa (SSA) can only afford second-hand clothing because of their low earnings. The fact that second-hand clothing and footwear are being imported shows that there is a domestic market for them.

The expansion of the second-hand clothing market was made possible by liberalization laws implemented in the late 1980s and early 1990s. A major factor in the industry’s growth has been its advantage over the local clothing industry. As recently as the 1980s, substantial tariffs protected domestic garments and other firms from foreign competition.

Imported second-hand clothing has increased exponentially since governments liberalized the textiles industry. Many textile mills in Kenya, for example, have shut down because of the used clothing sector popularly known as mitumba.

Apart from West Africa, many other countries in Africa do not have established apparels units. Current and future governments should make this a priority to ensure that the continent moves from depending on countries out of the continent for their clothing.

An interesting fact is that liberalizing of the textile industry was backed by the World Bank and the International Monetary Fund in a raft of economic programmes which lowered or entirely removed tariffs leading to the unsustainability of local factories. As a result, many companies failed and shut down altogether.

Kenya, Tanzania, Uganda, Burundi and Rwanda were considering ending used garments imports by 2019 in a move aimed at increasing domestic production. So far, only Rwanda has successfully banned the sale of imported second-hand clothes which did not sit well with the US. In retaliation, the US ended Rwandan duty-free export privileges under the African Growth and Opportunity Act (AGOA) which eliminates barriers to US trade and investment.

Just like climate change crisis hits the most vulnerable and those who are least responsible the hardest, hazardous waste from wealthy nations has done the same.

There have been cases of these countries illegally dumping their waste on the African continent putting Africans at risk of disease and death. The long-term health effects of some of these dumps are yet to be understood.

To address this, the African Union has an ambitious agenda of recycling by 2023 at least 50 per cent of the waste African cities generate.  In 2019, Africa generated 2.9 million tonnes of waste electrical and electronic equipment (WEEE).

The UN’s Global E-waste Monitor 2020 report stated that health and the environment were jeopardised because Africa lacks rules and procedures for managing and recycling WEEE.

Battery and power outlet garbage dominated Africa’s e-waste in 2019 in 49 African countries which was equal to 2.5 kg of waste per person.

In addition to the e-waste generated by Africans, millions of tonnes of electronic waste disguised as “second-hand equipment” are being dumped by European and American countries.

A case in point is when on June 29, 2020, more than 2,500 tonnes of electronic garbage was allegedly illegally exported to Nigeria and seven other African countries from Tenerife (Spain). 34 people were arrested in relation to the scandal, according to the Spanish Civil Guard.

Nothing much has come out of this heist.

Another sector that is being used to dump in Africa is the used machinery and vehicles industry.

Just like with used clothing, the multibillion-dollar used vehicle industry is one that is contributing to Africa’s lag in adopting clean mobility units.

UNEP has continually raised this issue of used vehicle flows to developing nations with the latest call in June this year showing that a policy is needed to deal with the potential danger of this dumping.

Inger Andersen, UNEP Executive Director, said it is important to deal with the used vehicles trade in efforts to tackle the climate crisis, biodiversity and nature crisis, pollution and waste crisis. UNEP’s used vehicle programme has recommendations for regional alignment in regulatory approaches in dealing with used vehicles.

Andersen notes that the used vehicles trade has a significant impact on air pollution, carbon emissions, waste management and road safety.  The initial focus of the recommendations was light-duty vehicles but UNEP will release another report later this year on trade in heavy-duty used vehicles.

Regionally, only ECOWAS has committed to ban the importation of used vehicles older than the EURO 4 standard. UNEP is in discussions with the East African Community for a similar commitment.

While these three types of waste are not exhaustive, Africa cannot sit pretty but it has to get down to work on policies that ensure that every African has the quality of life and the dignity they deserve.

With COP26 behind us, Africa has to take things into its own hands and chart its path for the present since the future remains threatened.