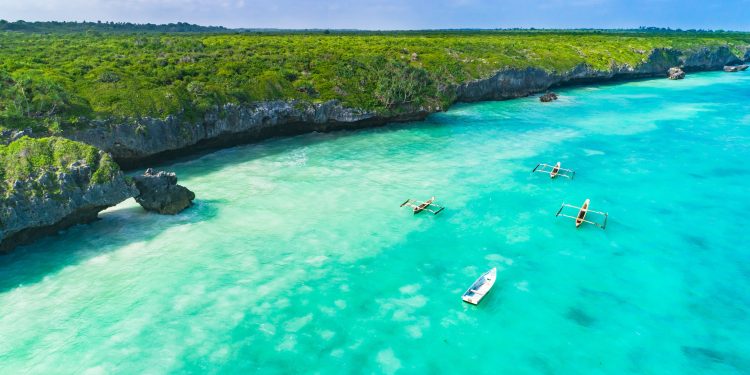 Zanzibar’s tourism sector is rebounding on the back of Covid-19 vaccination campaign and sound government Fiscal policies. [Photo/shuttestock]

Island government issues soft loans to SMEs and invites investment in the tourism and hospitality industries.

by Giza Mdoe
in Industry and Trade
0

Zanzibar’s tourism sector is rebounding on the back of the Covid-19 vaccination campaign and sound government Fiscal policies.

The Island’s economy was enjoying an impressive growth averaging 7.3 per cent pre-Covid-19 pandemic. Between 2017 and 2019 the tourist Spice Islands were outperforming most global economies, then the pandemic struck.

After that, the economy grew only 4.8 per cent in 2020, and that is the overall average for the United Republic of Tanzania of which Zanzibar is a part.  In this period, the number of tourist arrivals to Zanzibar, whose economy is dependent on tourism, dropped by more than 60 per cent.

With tourist arrivals falling by more than half pre-covid times, Zanzibar’s economy took a major hit. After all, tourism contributes an average of 10 per cent to the island’s GDP.

According to the Zanzibar Investment Promotion Authority (ZIPA), Public expenditure, which accounts for about a fifth of the economy, declined by more than 9 per cent compared to 14 per cent growth in 2019 and 7 per cent average growth over the 2016–19 period.

A look at business performance gives you a picture of how bad things were on the island at the peak of the pandemic. ZIPA reports credit to the private sector in 2020 declined to -0.2 per cent from a high of 7 per cent growth in 2019.

Things were bad, electricity generation contracted by 4.3 per cent, imports of capital goods declined 13 per cent and tax collection, VAT and excise duties fell by 0.5, 2.2 and 3.7 per cent, respectively.

In that period, average prices increased by 4.1 per cent raising the cost of living significantly especially when you factor in the unemployment and under-employment that came with the pandemic, social well-being drastically collapsed.

The World Bank estimates that poverty increased by about 1 million people in 2020 to about 27.1 per cent. Of this, an estimated 0.6 million was directly due to the pandemic and the related economic growth deceleration.

Worse still, according to the COVID-19 Business Pulse Survey (COV-BPS), as of June 2020, about 140,000 formal jobs were lost, and some 2.2 million informal workers suffered income losses and that is not including farmers.

In the second COV-BPS survey that was issued just six months later in December 2020, 14 per cent of firms said they had to lay off workers in the previous month, and another 12 per cent reduced working hours or pay of formal workers.

Things were no better on the Mainland with Dar Es Salaam reporting almost 10 per cent of family-owned businesses simply made no money in this period and another 42 per cent succumbed to huge losses of revenue.

The rough seas that rocked Zanzibar’s economy seem to be calming down, and to recover, Tanzania as a whole applied for and received international funding to cushion its economy.

A US$200 million stimulus package was released to catalyse Zanzibar’s economic recovery of which US$100 million (over TShs230 billion) came from the International Monetary Fund (IMF) as a loan to Tanzania, and of this, US$100 million was specific for the Isles.

The package was announced earlier this year by Zanzibar President Hussein Ali Mwinyi. The Exchange quoted the president speaking during an investment conference as the country marked 60 years of independence.

Zanzibar’s president announced his government measures to among other things, issue investment permits within only three days, a move designed to spur the economy through private sector investment.

“Our ultimate goal is to reduce the number of days and make investment permits available within 24 hours. By doing so, it will build investor confidence, and encourage more people to invest in the blue economy, and also oil and gas exploration and tourism,” the president announced.

The president also announced the Island is now welcoming investors for the much needed Blue Economy, maritime investment. Dr Mwinyi said the Zanzibar government has set aside ten islets for investment in the tourism and hospitality industries.

He reassured stakeholders that his government is out to address challenges that deter investors and welcomed local and foreign investors to an island that he said is now open for business.

In this respect, Zanzibar’s Finance Act, 2021 as assented on 24 June 2021 amended Section 238 of the Zanzibar Companies Act, 15 of 2013 to now require companies incorporated on Tanzania’s Mainland but which also conduct business in Zanzibar to now register foreign subsidiary companies under the law applicable in Zanzibar for their operations in Zanzibar.

The goal here is to have more companies register on the island to increase Zanzibar’s internal revenue through taxes and related fees. The move is also expected to create employment on the island as companies open subsidiaries they will naturally have to hire.

Overall, according to the International Monetary Fund (IMF ), last year’s growth of around 4 per cent is expected to pick up to about 5½ per cent this year and to then maintain a steady growth of the next few years, assuming no other pandemic strikes that are.

Ceterisperibus, should the economic reforms announced by the new administration and the envisaged improvements in the business climate materialize, then medium-term growth could reach 6 per cent, says the IMF.

The IMF further projects that inflation on the island will remain at a single-digit level of about 3½ per cent while the fiscal deficit is expected to increase in FY2021/22 to about 3.9 per cent of GDP.

Nonetheless, the island and Tanzania, in general, must brace for tough times ahead, the IMF warns that; “…tourism receipts are expected to remain well below pre-crisis levels, and the projected increase in oil and other commodity prices will increase the import bill and partly offset earnings from gold exports.”

That being the case, there is a need for what the IMF describes as ‘an immediate need of Balance Of Payment (BOP) financing of US$1.1 billion.’ That figure represents 1.5 per cent of the country’s GDP.

Large as the funding requirement may be, the monies are needed or the country, according to the IMF, will suffer severe economic disruption. To stave off this hovering threat, Covid-19 vaccination is vital to rebuild investor confidence and to reassure tourists of safety on the island and the country as a whole.

In this regard, the government of Tanzania plans to hire at least 1,000 new health workers to relieve pressure in the testing and treatment of COVID-19 patients to run alongside the ongoing vaccination campaign.

It is also expected that the government will spend about 1 per cent of its GDP on goods, services with most of this spending going to the health and tourism sectors.

Africa gears up for switch to circular economy