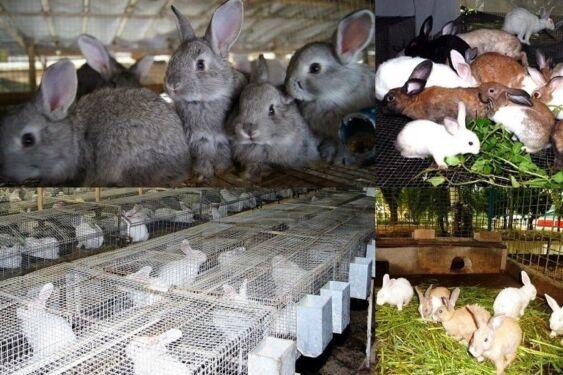 With its significant potentiality to generate revenue for the country, its potential export market includes China and the US and farmers are leaving nothing to chance to the lucrative farming business.

Rabbit farming is a very profitable business with its demand for rabbit meat increasing in Zimbabwe. People want to try a different type of meat which is not chicken, beef, or pork.

A lot of people are switching to more healthy meat with less fat. Rabbit meat has become a perfect replacement for chicken since it is also white meat. Rabbits are easy to keep and are very profitable as the feed costs are low due to the fact that they eat a variety of foods.

An increasing number of farmers in Zimbabwe are keeping rabbits due to the high profits from the rabbit farming business. Demand for rabbits is high and there is a lot of potential for the growth of the market.

In our extensive research on Rabbit production in the country, Farmers in Zimbabwe expressed their support to the business as well as their commitment to working with the Zimbabwe Commercial Rabbit Breeders Association (ZICORBA) to improve rabbit breeds in the country.

ZICORBA has already secured a niche for rabbit meat on the local market where demand is expected to soar to more than 25 tonnes per month worth more than the US $1 million.

The farm-gate price for rabbit meat is estimated at between $4 and $4,50 per kilogram.

“I am excited to be working with ZICORBA in their quest to build a vibrant rabbit farming industry in Zimbabwe.

“There is scope for rabbit farmers in South Africa and Zimbabwe to work together for the good of our industry,” a Rabbit farmer said.

The breeds were made up of Chinchilla Giganta, New Zealand Whites and Reds, American Sable Cinnamon, and Californian.

“This is our single largest export in more than four decades and we look to continue cooperating with our Zimbabwean partners as the cuniculture industry continues to grow in leaps and bounds,” Mrs. Stuart said.

Paidamoyo Nyamakanga, executive director of Raymeg Consultants Group, whose firm imported the rabbits, thanked the Government for granting her company an import permit for the rabbits, saying this laid a strong foundation for the country’s rabbit industry.

The president of ZICORBA Regis Nyamakanga, says his organization is committed to improving the livelihoods of 1,8 million households in Zimbabwe through rabbit production.

Rabbit production is now practiced across the whole of Zimbabwe. The Zimbabwe Commercial Rabbit Breeders Association (ZICORBA) has structures and full-time staff in all the country’s 10 provinces.

Notably, Zimbabwe’s export approved rabbit abattoir with a capacity to handle one tonne of rabbit meat per day which is currently under construction in Harare and is due to be completed at the end of April 2021.

Egypt, Kenya, South Africa, Nigeria, Ghana, and Zimbabwe are among some of the top producers of rabbit meat in Africa.

The global rabbit meat market revenue amounted to US$6,4 billion in 2017, picking up by 12 percent against the previous year while meat consumption peaked in 2017, and is expected to retain its growth in the immediate term.

The amount of rabbit or hare meat consumed worldwide totaled 1,5 million tonnes in 2017, picking up by 2,9 percent against the previous year.