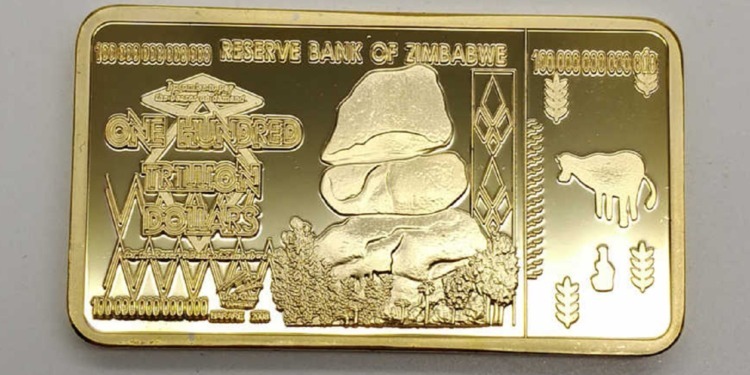 A gold clad and bullion bar by the Reserve Bank of Zimbabwe. Gold exports are Zimbabwe's most valuable resource. [Photo/AliExpress]

Gold deliveries for the first ten months of 2021 totalled 22 tonnes, up from 16 tonnes in the same period last year, according to numbers released this week by Fidelity Printers and Refiners (FPR).

Gold exports, Zimbabwe’s most valuable resource, dropped from US$1.60 billion in 2019 to US$980 million in 2020. The RBZ blamed Covid-19 lockdowns, alleged smuggling, power shortages, and outdated technology for the overall low gold production in 2020.

In mid-2021, FPR declared that it would address these fundamental difficulties by permitting large-scale gold mining businesses to export a portion of their bullion directly. FPR believes that by allowing enterprises to receive capital in the form of gold loans, this move will improve production.

FPR also expects that direct payments will help discourage small-scale miners, who extract the majority of the country’s gold, from illegally exporting it, which is estimated to be worth US$1.2 billion each year.

The RBZ stated in August 2021 that it would split FPR into two entities and sell its majority stake in the new gold refinery company to ten mining companies.

Large-scale miners supplied nine tonnes of gold over the time, according to FPR, the country’s lone buyer of gold, lagging output from small-scale producers, which delivered 13 tonnes. Bullion output fell slightly to 1,38 tonnes in April, then jumped to 1,66 tonnes in May before soaring to 2,92 tonnes in June.

According to the study, July’s output was 2,82 tonnes before climbing to 3,17 tonnes and 3 tonnes in September and October.

The government-sanctioned the creation of 20 gold centres in August as part of a significant production ramp-up. This came after Finance Minister Mthuli Ncube stated that ten corporations would take over FPR for US$49 million.

Irvine Chinyenze, the chief executive officer of the Gold Miners Association of Zimbabwe, said output had been encouraging in the previous year. He states that the numbers are positive. When all other circumstances are taken into account, it mirrors what is happening on the ground. It indicates that the Zimbabwean government are taking things seriously.

That is why deliveries are pouring in and why the quality of the deliveries have greatly improved.

Stakeholders are also putting up a lot of effort in this area. The government is doing everything it can. Other stakeholders in the industry, particularly in terms of investments, are also doing their part.

Read: What the AfCFTA means for Africa’s mining sector

In the small-scale mining sector, there is evidence of a lot of collaborations and strategic partnerships. However, there has been concern about the absence of mechanisation in the business for a long time. Small scale miners are still using inefficient methods of mining due to a lack of resources. This trend is widespread as there are currently no lines of credit being availed to small scale miners.

Lack of security and the absence of well-structured business plans are sighted as underlying problems preventing many from obtaining loans from financial institutions.

As a result, efficiency is not quite there yet, but progress has been made toward the mechanisation of the industry. In terms of production, we’ve seen a significant improvement. If this trend continues, it indicates that better times are on the way.

Since the central bank revealed changes in FPR ownership, according to economist Victor Bhoroma, there has been a significant increase in official gold production.

He was concerned, however, that the benefits of increased production might not reach every Zimbabwean. Particularly since foreign players, most notably the Chinese, are snapping up claims all over the country. This is proving to be a bone of contention amongst some communities as they are feeling marginalised.

Very little of the gold mining in these communities is resulting in any meaningful community development.

In terms of payments and prices, it appears that there is agreement. The increase in gold output helps the country profit from the recent surge in commodity prices and increase its foreign currency profits. The country’s trade balance improves as a result of this. Because of our policy mismatch, the benefit to regular citizens is currently minimal.

The future for gold mining, according to Mines and Mining Development Minister Winston Chitando, is optimistic.

Investments in essential operations such as Padenga Holdings’ Eureka, Central, and Pickstone gold mines, which are listed on the Zimbabwe Stock Exchange, will drive the industry in 2021, he said.