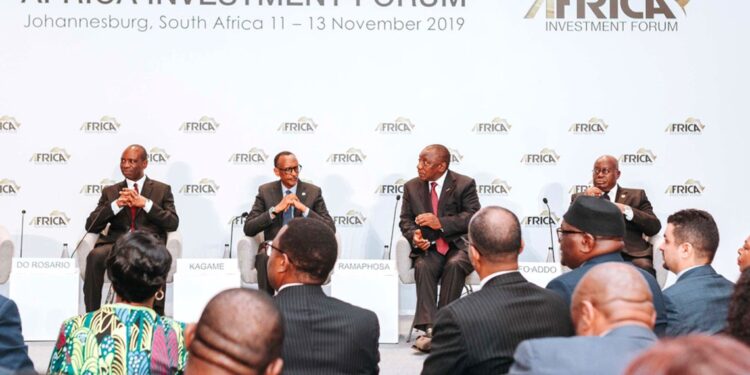 Leaders of the Africa Investment Forum and stakeholders at a 2019 investment meeting. [Photo/AIF)]

Africa is increasingly turning to the private sector to co-fund and lead development investment across all sectors. This approach opens up room for both large and small players to invest in various Africa development projects.

One such entity is the Africa Investment Forum (AIF) which will this March put up over 40 investment deals for the general public to bid. This meeting follows the postponement of the earlier planned physical meeting late last year and as such, the deals will be aired over virtual boardroom sessions.

The AIF is a multi-stakeholder platform that advances private and public-private partnership projects. The forum works to increase access to funding and accelerate deals to financial closure.

This time around, the AIF is propagating some forty-five deals worth $57.4 billion for public-private partnerships. The projects are expected to create a total of 3.8 million jobs, both directly and indirectly. ‘Of these, one million jobs will go to African women and women entrepreneurs, and another one million to youth,’ reads the press release in part.

The announcement says the virtual boardroom sessions will be held from 15th to 17th March this year. This follows the postponement of the third edition of the AIF due to the emergence of the Omicron variant of the Covid-19 virus.

The press communication provides a summary of progress updates and a preview of at least five deals. Of these, three major ones include investment to develop over 220 km of electric transmission lines under a long-term public-private partnership agreement.

Then there is a project to roll out broadband infrastructure to over 800,000 residential and small business customers over the next ten years. Third on the list is a deal for the establishment of a biomedical and pharmaceutical hub in Africa.

A major topic of discourse is Africa producing its own vaccines. Now, both the private and public sectors in Africa are lobbying for what is essentially a very lucrative deal for the provision of much-needed affordable health care.

Only last year, members of the AIF team showcased two projects that were focused on the pharmaceutical and healthcare sectors. Jointly, the two projects are worth over US$140 million and are to be carried out both in East and West Africa.

“The first opportunity, with a project cost of US$96 million, is for the development of a 250-bed specialist hospital offering world-class healthcare services in a West African country,” the Forum announced in a press release.

“The second project is for the construction of a US$45 million WHO-prequalified vaccine production plant in East Africa that will be capable of routine production of three vaccines, including for Covid-19,” the Forum announced.

AIF Senior Director Chinelo Anohu pointed out the importance of the East Africa vaccine plant project saying it is vital given the current state of Africa’s limited access to Covid-19 vaccines.

“Through trade and investment, particularly in its pharmaceutical sector, the continent can avoid vaccine inequity,” Anohu said.

“What we’re looking to provide with the AIF is a co-investment platform where you mobilize domestic investors, mobilize project sponsors for the continent, and then mobilize international investors, those who are looking to make an investment and get a profit,” he added.

Health is one of five priority investment sectors under the AIF’s Unified Response to Covid-19 pillars. The others are agribusiness, energy and climate change, ICT/Telecoms, and industrialization and trade.

Notably, previous work by the AIF has allowed over 10 deals to go through and these alone are valued at US$3.1 billion. The Forum currently has some other 136 deals in the pipeline which carry a total value of US$87.52 billion.

Making the announcement, the AIF Senior Director Chinelo Anohu said, “…there is an energized commitment to push the AIF forward.”  She said that in addition to investments, the Africa Investment Forum was working to support an enabling environment across African countries. “Good policies make good investments.”

She was speaking during a two-day meeting of the AIF’s founding partners in late February. At that meeting, the heads of the founding partners discussed the development and strategic areas of focus for the course of this coming year.

Attending the meeting were at least 160 participants representing a score of investors they included a representative from the United States Trade and Development Agency,  the Executive Secretary of the UN Capital Development Fund, and delegates from the Multilateral Cooperation Center for Development Finance.

In his comments, the African Development Bank President Akinwumi A. Adesina stressed the importance of prioritizing Africa’s health care security and what he described as ‘Africa’s health sovereignty.’

“Based on three pillars, building quality healthcare infrastructure, developing the continent’s pharmaceutical industry and increasing the capacity of vaccine manufacturing…Africa must finance its health sovereignty,” he said.

This partnership alone is expected to collect up to US$500 million for the early stage of the project development i.e. to catalyze bankable, greener infrastructure projects across Africa.

“Going forward, we need to work more closely together to accelerate the pace of investments in infrastructure,” he urged.

The president emphasized the need for acceleration of capital and domestic resource mobilization. He said it is time that each stakeholder plays their role in the African Continental Free Trade Area to speed up the development of regional markets as well as Africa’s energy transition to green, clean energy.

Read: Does Africa have what it takes to produce human vaccine?