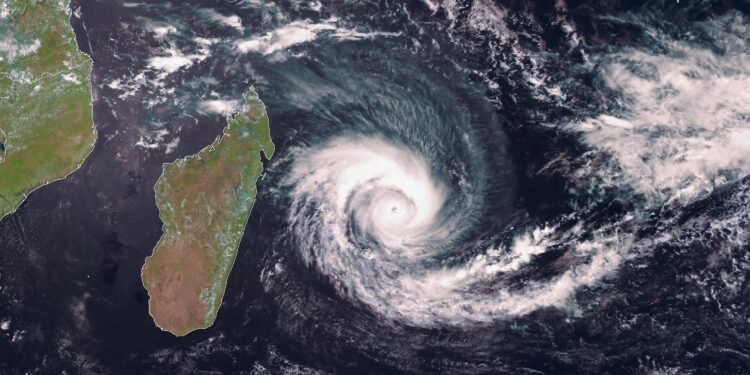 by Joseph Kangethe
in Africa, Africa's Development, News
0
Share on FacebookShare on LinkedIn

Several cyclones, from Cyclone Ana, Batsirai, Idai, Eloise, Kenneth and Tropical Storm Chalane, have tormented the southern part of the African continent – from South Africa, Mauritius, Madagascar, Mozambique, Malawi and Zimbabwe.
A cyclone is a tropical storm with heavy winds rotating inwards to an area of low pressure. An anticlockwise circulation occurs in the northern hemisphere, while a clockwise circulation happens in the southern hemisphere.
The frequent occurrence of these storms indicates the heightening effects of climate change in the southern region of Africa and the world at large. The cyclones have altered landscapes on the coast and destroyed forest canopies. The most recent cyclones that have occurred in the southern region of Africa and their impact include:
Cyclone Ana
According to data from the National Institute for Disaster Risk Management (INGD), tropical storm Ana in January 2022 affected 180,869 people, injured 207 people, killed at least 38 people and flooded a total of 70,982 hectares of land. The storm damaged 26 health centres destroyed more than 12,000 houses, 25 water supply systems, 138 power poles and some 2,275km of roads. Cyclone Batsirai appears to have been triggered by Ana and has also had its share of destruction.
Cyclone Batsirai
Cyclone Batsirai has destroyed relief infrastructures set up after the previous cyclones. The cyclone hit the eastern coast of Madagascar on Saturday, February 5th, 2022, with winds exceeding 200km/h and more than 700km diameter, provoking massive rains. It then hit the highlands and exited the country through the Mozambique Channel on February 6th at 7 p.m.
Consolidated results of aerial and inter-agency assessments released by Bureau National de Gestion des Risques et des Catastrophes (BNGRC,)a national disaster and management agency – and other humanitarian partners – show the strength of Cyclone Batsirai could increase and spread to other countries in the Southern Indian Ocean.
Cyclone Idai
Cyclone Idai occurred in March 2019, killing over 1,000 people and destroying more than 100,000 homes in Mozambique, Malawi, Zimbabwe and Madagascar. The cyclone left at least 1.7 million people needing food and shelter aid in Mozambique alone.

Read: Cyclone Kenneth: Mozambique evacuates, Malawi cautions citizens.
If the cyclones continue past February, Southern African countries along the Indian Ocean will be in for a hard-hit economic crisis. The main sectors affected by the cyclone are essential to the region’s economic sustainability.
Electricity Cut Offs
In two weeks, Madagascar, the most cyclone exposed country in Africa, experienced both Ana and Batsirai cyclones. Cyclone Batsirai is moving at an average of 165 kilometres per hour, destroying houses and power and causing electricity cut-offs throughout the island’s eastern side. Weather forecasts have warned against heavy rainfall accompanied by strong winds.
Water and power supplies are ambitiously being restored in areas affected by both cyclones despite the fear that another cyclone might hit the already affected regions.
Cyclone Batsirai passed through Mauritius, leaving at least 1600 households without electricity. South Africa lost more than 900 Megawatts of power imports from Mozambique due to Cyclone Idai.
Hydroelectric power stations and wind power stations infrastructure will experience heavy damages if the strong winds progress inland. The effects of the cyclones have heavily derailed the agricultural sector.
Agriculture
Production of crops employs thousands of people and earns countries foreign exchange.
The World Food Programme (WFP) says that at least 1.64 million people in Southern Madagascar need food and nutrition assistance after Cyclone Batsirai. Over 309,000 children are expected to suffer from acute malnutrition, and WFP requires approximately US$56.3 million by June 2022 to curb the situation.
The government of Madagascar is providing cash transfers to vulnerable households affected by cyclones. WFP, in coordination with national authorities, has started distributing hot meals to 4,000 people who have been evacuated.
“We have still waters increasing in canals, rivers, and people are still in danger. We know for sure that rice fields will be damaged,” said Pasqualina DiSirio, Country Director of WFP in Madagascar. “This is the main crop for people in Madagascar, and they will be seriously affected in food security in the next three to six months if we do not do something immediately and we don’t help them recover.”
Cyclones heavily erode the topsoils, destroy storage and irrigation infrastructure and disrupt access to market produce.
The fear of cyclone effects and the deaths they have caused have discouraged tourism in the Southern Indian Ocean region.
Tourism
The cyclones have hit the beaches of the South African countries disrupting tourism by a considerable percentage. Most tourists fear the cyclone’s effects, which has halted tourism, specifically in Madagascar.
Bridges have broken, and all national roads remain inaccessible and are only open to vehicles over 15 tonnes. The long-term effect of the disrupted tourism will reduce the gross domestic product of the affected countries. Due to heavy floods and strong winds, the GDP will continue to dump as most retail businesses have also shut down.
Retail Businesses
The streets of Antananarivo have been abandoned as banks, and retail businesses remained closed. The director of the Rapid Response Unit in the Ministry of Population warned about landslides that pose a grave threat to the businesses in the affected regions.

Read: World Bank raises $700 million for cyclone Idai victims
People have tried to reinforce their roofs by putting sacks of sands over them, but Cyclone Batsirai has grown stronger by day.
Many businesses depend on electricity to run, and the power outages caused by the strong winds from the cyclones could have led to heavy losses for businesses in the affected countries.
Anglers in the Indian Ocean have also lost their source of livelihoods; boats that the strong winds have destroyed.
“It’s as if the cyclones had just bombed us. The city of Nosy Varika is 95 per cent damaged. The solid houses have had their roofs blown off by the wind. The wooden huts have, for the most part, been destroyed.” Willy Raharijaona, an adviser to the vice president of Madagascar’s Senate, told Reuters after the occurrence of Cyclone Batsirai.
The cyclones have destroyed clinics and hospitals, and the cold experienced by the displaced people will drastically affect their health conditions.
Health Sector
The cyclones had killed about 135 people in Madagascar, with many victims drowning or crashing when their houses collapsed. At least 69 health facilities have been affected, including the district hospital in Mananjary, which is currently not operational.
Cyclone Batsirai has caused flooding in cities, which creates a pool to spread waterborne diseases. Over 221,000 people have been displaced and their houses destroyed.
Most of the affected countries were struggling with food shortages because of drought, and the cyclones were salt to an already worsening injury.
The United Nations’ gender and sexual health agency, together with the Ministry of Health in Madagascar, provides psychological first aid to the affected people in evacuation camps.
The cold and strong winds caused by the cyclones are immeasurable, especially for children, and could cause severe health conditions.
The cyclones have also destroyed access to clean sources of water which is worsening the health conditions of people in the affected areas.
Importation and Exportation
Production in the affected countries is bound to decrease significantly, decreasing the export of goods to neighbouring countries and overseas.
Electronics, minerals, animals and animal products and several goods flow in and out of countries in Southern Africa through the Indian Ocean ports. The strong winds make it impossible for ships to dock, disrupting trade by a considerable margin.
Planes are discouraged from flying into affected regions, which will seriously affect imports flowing in the southern part of the Indian Ocean countries.
Education
Children’s access to education has been significantly affected by Cyclone Batsirai, with more than 133,600 children losing access to classes. ReliefWeb reports that over 4,500 classrooms have been destroyed, with roofs blown off or partially damaged.


Cyclone Ana destroyed nearly 800 schools in Mozambique, affecting over 300,000 students and 4,700 students. The government has erected tents to serve as temporary classrooms. Other schools have become refugee camps disrupting education in those schools.
The cyclones have pushed further the severe effects on education that the COVID-19 pandemic has already impacted. Children in the affected areas will have a hard time coping even when they resume class because of the trauma caused by the effects of the cyclones.
Poor preparedness in most affected regions has been a significant reason why cyclones have had a devastating effect on the African continent. Governments cannot avoid being hit by cyclones but can mitigate the effects by taking the necessary precautionary measures. This includes monitoring the cyclones, alerting the red zones, providing people with food and proper cyclone shelter and controlling dam water levels to prevent a post-cyclone flood situation.
Mangroves plants have a shallow surface roughness factor and can help limit the magnitude impact of cyclones. Planting mangroves along the vulnerable coasts could downscale the impacts of a cyclone.
Governments should make it mandatory for more robust electricity and settlement infrastructure to be made stronger in areas prone to cyclones and tropical storms.