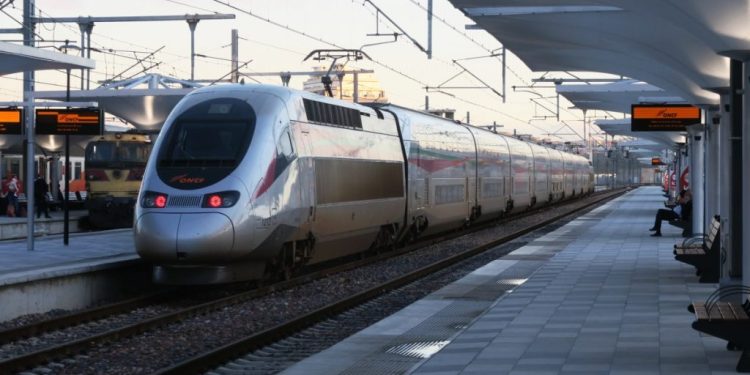 Al Boraq is a 323-kilometre-long high-speed rail service operated by ONCF in Morocco between Casablanca and Tangier.

As a result of this project, the community’s greenhouse gas emissions will be reduced in terms of connection, journey duration, and frequency. In addition to increased profits.

Because of the LGV, the travel time between Tangier and Kenitra has been cut by two hours and twenty-five minutes, resulting in a decrease of more than 2.9 million tonnes of carbon equivalent in the thirty years time frame.

Indeed, ONCF is fully committed to a socio-environmental policy, placing sustainable mobility at the heart of its corporate strategy and development model. This is done to reinforce the intrinsic ecological qualities of the railway mode, which acts as a vector of sustainable mobility.

ONCF has taken a significant step forward in its energy transition by switching to using only environmentally friendly wind energy to power all of its Al Boraq trains as of 2022.

The train is among the most efficient and least polluting modes of transportation, according to the International Energy Agency (IEA). Trains account for only 0.3 per cent of total global emissions, whereas aviation accounts for 2 per cent.

Even though transportation accounts for a significant portion of green bond issuances worldwide (twenty per cent of all green bonds issued worldwide), this sector is still grossly underrepresented in total distributions in Africa (less than one per cent).

This project is an example of how addressing infrastructure difficulties and providing a friendly solution to the environment may be accomplished through utilising a capital market instrument known as a Green Bond.

This initiative is one of the avenues FSD Africa is considering to bring about the change and demonstrate to other prospective issuers and investors the practicability of the green bond labelling procedure.

Green bonds are one of the choices that are both easily accessible and most cost-effective to raise vast quantities of finance in order to accomplish environmental targets in Africa.

This project’s potential long-term anticipated market system improvements will lead to a more sustainable future that will be characterised by the building of economic resilience through more efficient and low-carbon passenger and freight transport. In the future, this will help make the planet a better place to live.

“Climate Finance is a significant emphasis area for FSD Africa. This project allows FSD Africa to support issuing Africa’s first corporate clean mobility bond. In recent years, there has been a growing interest in the issue of green bonds as a method for releasing big money for investments related to environmental and social responsibility. We look forward to continuing our support of the issue of green bonds, said Mark Napier, the CEO of FSD Africa.

“Morocco’s potential for financial innovation is propelling a new era of post-covid economic growth that, with the right ingredients, may set the Kingdom on a track toward truly sustainable prosperity.

Thanks to the efforts of organisations like FSD Africa and its partners, I’m extremely proud that, thanks to the efforts of organisations such as FSD Africa and partners, the British Government is assisting Morocco in its efforts to establish a low-carbon transportation infrastructure with its national railway operator ONCF issuing Africa’s first corporate clean mobility bond,” said Simon Martin, the British Ambassador in Morocco.

Read: The business of Green Bonds in Africa