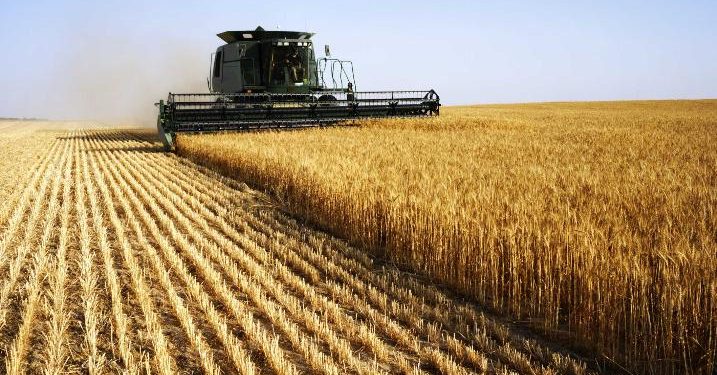 Ukraine is a top exporter of corn, barley, and rye, but it’s the country’s wheat that has the biggest impact on food security around the world. Wheat Harvesting (Photo/ The Sun Weekly)

African countries need to take advantage of their 60 per cent global share of arable land to grow more food for domestic consumption and export to the global market.

While Africa is yet to fully recover from the socio-economic repercussions of the COVID-19 pandemic, the Russia-Ukraine conflict poses another major threat to the global economy with many African countries being directly affected.

According to an article published by Aljazeera on May 6, 2022, the conflict in Ukraine and Western sanctions on Moscow are disrupting supplies of wheat, fertilizer, and other goods, compounding the difficulties Africa already faces from climate change and the coronavirus pandemic.

Africa Renewal in an article published on April 21, 2022, said that Russia and Ukraine are major players in the export of wheat and sunflower to Africa. North Africa (Algeria, Egypt, Libya, Morocco, and Tunisia), Nigeria in West Africa, Ethiopia and Sudan in East Africa, and South Africa account for 80 per cent of wheat imports.

Increase in fuel prices and higher costs of food production

Russia is also the world’s third-largest oil producer behind the United States and Saudi Arabia. The disruption of oil prices on the world market is expected to lead to an increase in fuel prices and higher costs of food production.

Speaking about Africa’s priorities, as a guest at the Atlantic Council’s Africa Center in April, African Development Bank Group President Dr. Akinwumi Adesina said “Africa must prepare for the inevitability of a global food crisis.”

The United Nations said Africa faces an “unprecedented” crisis caused by the Russian invasion of Ukraine that has led to soaring food and fuel prices.

“This is an unprecedented crisis for the continent,” UNDP Africa chief economist Raymond Gilpin said in May 2022.

“We are seeing a reduction of GDP growth on the continent,” he said.

Russia’s war in Ukraine threatens both global and African food security, as Russia and Ukraine are essential grain exporters to the continent. The recent spike in food scarcity and price hikes, especially in countries reliant on imports from Russia and Ukraine, is of great concern.

In a publication by ReliefWeb dated April 24, 2022, Dr. Adesina cautioned that to fend off a food crisis, Africa must rapidly expand its food production.

According to Africa Renewal, Africa must also see the current geopolitical crisis as an opportunity to reduce its reliance on food imports from outside the Continent.

African countries need to take advantage of their 60 per cent global share of arable land to grow more food for domestic consumption and export to the global market. This would lower the number of people facing food and nutrition insecurity caused by external shocks.

African Renewal added that the African Common Position on Food Systems provides pathways for Africa to increase home-grown agri-food production and ensure inclusive access to sustainable and nutritious food sources, while addressing structural weaknesses and vulnerabilities, including poverty and inequality.

The successful transformation of African food systems will largely depend on the willingness of African countries to realize continental and regional solutions to build and sustain greater resilience in the face of external shocks. 2022 is Africa’s Year to action on food and nutrition development goals.

Bloomberg said Nigerian business mogul and Africa’s richest man Aliko Dangote has taken advantage of the shortfall in Russian fertilizer exports by opening a $2.5 billion fertilizer plant in Nigeria’s main economic hub, Lagos, with the intent of selling fertilizer to the continent as well as to the United States, Brazil, and India.

Dangote also plans to launch an oil refinery that would produce 650,000 barrels per day. Currently, the Dangote Group is the second-largest employer in Nigeria after the federal government, and a new plant is a tremendous opportunity to replace Russian fertilizer imports with African jobs that create warehousing, transport, and logistics infrastructure that help to reduce poverty.

Global wheat, sunflower, and oil crude prices have soared to unprecedented levels. Africa is heavily reliant on food imports from both countries, and the Continent is already experiencing price shocks and disruptions in the supply chain of these commodities.

Over the past decade, the Continent has seen growing demand for cereal crops, including wheat and sunflower, which has been mainly supported by imports than local production. Africa’s wheat imports increased by 68 per cent between 2007 to 2019, surging to 47 million tonnes.

In a related article published by the United States Institute of Peace on April 14, 2022, Africa imported $4 billion and $2.9 billion worth of agricultural products, respectively, from Russia and Ukraine in 2020 alone. With the ongoing war in Ukraine, prices of corn, wheat, and soybeans have surged. About 20 million people in the Sahel and West Africa do not have access to sufficient food.

The article further stressed that in Egypt, wheat is the main food item, representing about 39 percent of caloric intake per person. Also, the Egyptian government imports about 50 to 60 percent of its cereal from Russia and Ukraine, despite the government’s efforts to diversify imports following the global food crisis of 2008.

Meanwhile, Indonesia’s export policy has sent the palm oil industry into a tailspin. According to an article published by DW on April 22, 2022, Indonesia announced a ban on palm oil exports in a bid to stymie the soaring domestic price of cooking oil. The price of cooking oil has risen substantially as a result of Russia’s invasion of Ukraine. Palm oil is the most produced, consumed, and traded edible oil in the world. Both Ukraine and Russia are major exporters of sunflower oil. Indonesia accounts for more than half of the world’s palm oil exports

Palm oil is processed and shipped in different forms. The fleshy, red fruits of the oil palm tree are crushed to produce crude palm oil. The product can be refined, bleached, and deodorized to remove impurities. With further processing, palm olein is produced, which is the most widely used cooking oil in the world. The non-edible oils are used to make biodiesel and soap.

The move by Indonesia, which accounts for a third of global edible oil exports, adds to a raft of crop protectionism around the world since the war in Ukraine erupted, as governments seek to protect their food supply with agriculture prices surging.

Opinion: Why women in Construction matter