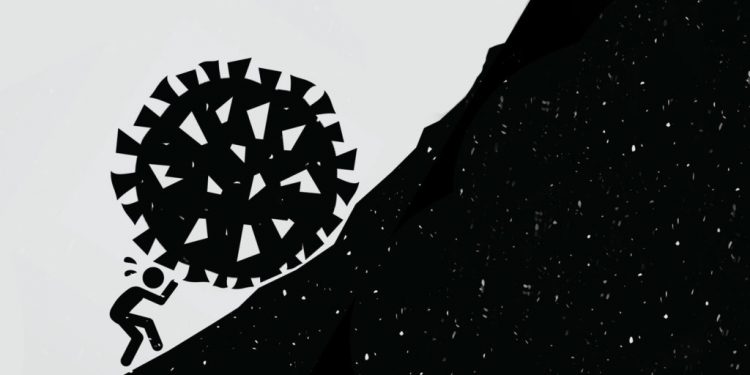 Africa stands a great chance of being hit by the global recession more than anywhere else. The acute dependence on factory goods from exterior markets as well as dependency on sectors like tourism will hurt African economies for a long time as expected.

During the 2014-2015 Ebola outbreak in West Africa the disease brought the economies of the region to its knees. The overall impact of the Ebola crisis on Guinea, Liberia, and Sierra Leone was estimated by the World Bank to have hit $2.8 billion ($600 million for Guinea, $300 million for Liberia, and $1.9 billion for Sierra Leone). This included the shocks in 2014 and 2015, and 2016 as the economic impact is outlasting the epidemiological impact.

The economies of the region remained in recession for a while and the countries are still showing signs of human capital loss as well as economic stagnation. Liberia lost 8% of its doctors, nurses, and midwives to Ebola. Sierra Leone and Guinea lost 7% and 1% of their healthcare workers, respectively.

The United States, the United Kingdom, and Germany were the top donors to the international Ebola response, donating more than $3.611 billion (US$) by December 2015. The US government allocated approximately $2.369 billion for Ebola response activities that included technical expertise, resources to the response and new emergency operations center in Guinea, Liberia, and Sierra Leone.

The cost of reconstruction was quickly taken up by the west who shielded the countries from a total shutdown. However, for the Coronavirus outbreak, its ‘big brothers’ are badly affected and Africa might be secondary to their needs.

What has followed is global market players and governments pumping millions of dollars to contain the spread of the virus that has Wuhan city at its epicenter. The US and Europe have already announced setting up of special kitty to treat, contain and mitigate the effects of the virus both as a disease as well as the economic heat that comes with the disease.

China, the second-largest economy in the world and Italy—Europe’s third-largest economy and 8th globally—have been severely affected by cities like Rome remaining ghost-towns as economic and commercial activities come to a halt. There is a growing fear that the world is slowing coming to a halt.

Writing for the UK Independent.co.uk, Omar Hassan is an economic development specialist and co-founder of UK:MENA Hub.  He says Coronavirus will bankrupt more people than it will infect. This, he argues, is led by a cocktail of issues including the global oil market but most importantly, the effects of Coronavirus on global economies.

The US stock market has now wiped out the entire $11.5 trillion of value it gained since Trump’s 2016 election victory according to US market intelligence group Bespoke Investment Group. Since stocks are a piece of ownership in a company, the stock market is basically a vote of confidence in the future of all these companies and, as such, in the US.

The Federal Reserve Bank of New York is responding to this through a $1.5 trillion capital injection to combat the coronavirus fallout and ‘highly unusual disruptions’.

Africa stands a great chance of being hit by the global recession more than anywhere else. The acute dependence on factory goods from exterior markets as well as dependency on sectors like tourism will hurt African economies for a long time as expected.

Kenya tourism ministry has already revised its projected revenue from tourists’ arrival, a major revenue earner for most African countries. The Kenyan government has set up a kitty to tackle Coronavirus ripple effects, especially on its sensitive tourism industry. The Ministry of Tourism has set aside KSh500 million ($5 million) for its post Coronavirus (COVID-19) recovery plan.

“Part of this money will be used to restore destination confidence to ensure that Kenya remains as a preferred travel destination globally while the rest will be used for the post Coronavirus recovery strategy in all our key source markets,” NajibBalala, the Cabinet Secretary in charge of tourism was quoted by the local media.

67 million tourists visited Africa in 2018 and contributed 8.5% (or $194.2bn) of the continent’s gross domestic product. The number has been steadily rising until the outbreak of Coronavirus and any gain might be wiped out in an instant.

The World Travel and Tourism Council (WTTC) says up to 50 million jobs could be lost because of the pandemic and the sector could shrink by up to 25% in 2020.

While Africa has fought hard battles especially with diseases such as HIV, malaria or similar pandemics like Ebola, it has always received significant financial buffer from the established markets mainly in Europe and America.

Already, the United Nations Conference on Trade and Development (UNCTAD) has released a warning noting that the outbreak could cause global foreign direct investment (FDI) to shrink by 5%-15%. This is likely to be the lowest level since the 2008-2009 financial crisis should the pandemic continue throughout the year.

“The ripple effect could cause a major setback to efforts of government around the globe to attract the private investment needed to achieve sustainable development objectives,” UNCTAD Secretary-General Mukhisa Kituyi said. “Such a setback could deepen inequality and worsen vulnerability of many countries.”

Once a sector is affected in one country, the other African countries will fall like dominos and it will be a matter of time before the entire region is affected, hence the fear of a widespread recession.

Africa’s economic growth stabilized at 3.4 percent in 2019 and was expected to pick up to 3.9 percent in 2020 and 4.1 percent in 2021 according to African Development Bank (AFDB). The biggest economies have registered at least a case with Egypt, Nigeria, Algeria, South Africa, and Kenya registering losses due to the disease. South Africa’s economy has been facing recession and this new outbreak might wreck any gains achieved by the Ramaphosa administration.

Coronavirus and Tourism, the demise of the African Safari(Opens in a new browser tab)

The sectors to be greatly affected include aviation, health, tourism, manufacturing and basic commerce as Africa is dependent on basic commodities from European and Asian markets.

In 2019, China’s trade with Africa grew with China’s exports rising 7.9 percent to US$113.2 billion, while imports from Africa fell by 3.8 percent in the period to US$95.5 billion. Nigeria is by far the biggest importer of Chinese products in Africa with the Nigerian National Bureau of Statistics (NBS) showing that Nigeria’s imports from China hit N1.9 trillion in the first half of 2019.  Other major destinations of Chinese goods include Ethiopia, Angola, Tanzania, and now Kenya.

Production declines in China have been quickly felt by businesses around the world, given China’s key role in global supply chains as a producer of intermediate goods, particularly in computers, electronics, pharmaceuticals, and transport equipment, and as the primary source of demand for many commodities.

Safaricom holds the technology that stopped Coronavirus in South Korea