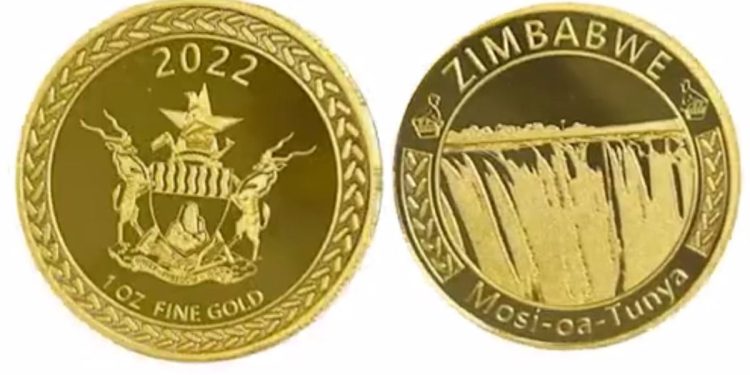 “Following the successful launch of the gold coins on July 25 2022 and in response to public demand, the bank shall introduce and release into the market gold coins in smaller units of a tenth ounce, quarter ounce, and half an ounce for sale with effect from mid-November 2022,” he said.

The features, characteristics, and sale terms and conditions shall remain the same as the present trading arrangements.

World-wide gold coins remain a popular asset class and in countries such as India, it has become a household investment for many.

The smallest coin, containing just over 3.11 grams of gold, will cost US$188.48, or local currency equivalent at the interbank rate, at one-tenth of yesterday’s price of the one-ounce Mosi-oa-Tunya. The actual price when it is introduced will be the world price of gold for one-tenth of a troy ounce plus a five per cent minting and distribution fee.

The new move of adding half an ounce, quarter ounce, and tenth-ounce coins follow the very successful launch of the one-ounce Mosi-oa-Tunya gold coins and its sales since July 25. Banks have so far sold 4 475 Mosi-oa-Tunya since the launch, with 90 per cent having been bought in local currency.

But a lot of ordinary people holding extra cash and liking the idea of investing in gold or preserving the value of some of their savings in gold, have complained that the one-ounce coins are far too expensive and have called for smaller coins.

In an article by Newsday dated August 8, 2022, the Zimbabwe Coalition on Debt and Development (ZIMCODD) called for lower denomination gold coins because only the elite are accessing them at the moment.

Currently, gold coins are valued at one ounce, weighing 33.93 grams, and are priced according to international prices that include production and bank charges, making them very expensive.

As a result, the coin is way out of reach for low-income earners and ordinary Zimbabweans.

“At the current price of about US$1 800, the coin is inaccessible to the wider majority of citizens,” ZIMCODD said in its weekend reader.

“As such, it is pertinent that a cheaper option is availed for those who seek to hedge their savings against inflation, but are unable to afford the current cost.”

Zimcodd said due to the pricing, the gold coins become a preserve of the rich as salaries that the majority of civil servants are earning for example are unable to purchase even a single coin.

Dr. Mangudya said that obtaining a tight monetary policy stance, coupled with the favourable uptake of gold coins and mopping up excess liquidity, would continue supporting the stability of the exchange rate and sustain dis-inflation.

The central bank kept the policy rate at 200 per cent saying it would be reviewed in line with developments in monthly inflation. The high rate is to ensure that it is not viable to borrow local currency to speculate in the black market or even buy gold coins.

With foreign currency-denominated loans now constituting more than half of the total banking sector loans, with effect from September 1, statutory reserve requirements would be extended to forex deposits at rates of 5 per cent for call deposits and 2,5 per cent for time and savings deposits to ensure continued soundness of the banking sector.

Foreign exchange retention thresholds have been maintained at 75 per cent for agricultural exporters and 100 per cent for tourism, recovering from the effects of Covid-19.

To further liberalize the foreign exchange market, the limit on foreign exchange transactions for individuals and micro, small and medium enterprises processed through bureaux de change will, with effect from August 15, be increased from US$500 per week to US$5 000 per transaction per month for payments that include medical expenses, educational expenses, business and holiday travel.

According to production figures availed by Fidelity Printers and Refiners, the country’s sole gold buyer, last month’s gold output by both small-scale and large-scale miners was up by 79,5 per cent to 2,994,75kg compared to 1,668,01kg in May 2021.

According to an article by 263Chat published on August 11, 2022, the Zimbabwean government launched an ambitious plan in October 2019 to transform the mining sector into a US$12 billion export industry by end of 2023.

The plan was launched as a key pillar to sustainable economic growth. The blueprint targeted Gold output of US$4 billion per year with Platinum coming in second at US$3 billion. Diamond mining and polishing were set at US$1 billion, equal to the combined target of Chrome, Nickel, and Steel. Coal, Hydrocarbons, Lithium, and other minerals were projected to contribute the remaining US$3 billion. Key to the above ambition is the beneficiation of minerals at source as opposed to exporting raw mining commodities. The Chamber of Mines in Zimbabwe (CoMZ) predicted that production from mining could reach US$18 billion by 2030, provided the key challenges in the sector are ironed out through policy and legislative reforms.