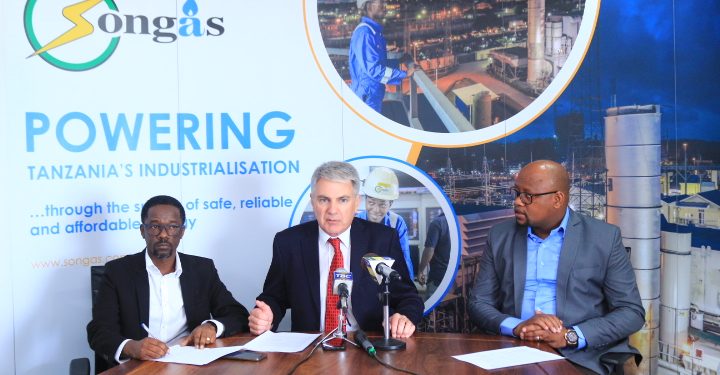 by The Exchange
in Extractive and Energy, Oil&Gas, Tanzania
0
Share on FacebookShare on LinkedIn

Songas limited has paid the government TZS8.8 billion in dividends as a result of its shareholding in the Tanzanian gas-to-power company.

Songas Chief Financial Officer, Anael Samuel said TANESCO will receive about TZS2.2billion while TPDC will receive an estimated TZS6.6billion, both amounts will be subjected to withholding tax.  The amounts are determined by each entity’s shareholding in Songas.

Additionally, the government also benefits from its 32% shareholding in TDFL, which receives about TZS 1.8 billion in dividends and also through the Tanzanian Revenue Authority from the withholding tax on dividends.

Since 2012 the company has paid TZS121.6 billion in dividends to government owned entities and contributed TZS139.3 billion in Corporate Income Taxes.

“Songas has been helping to power Tanzania’s industrialisation by providing approximately 20% of reliable and cost-effective electricity to the national grid, in addition to supplying natural gas to various manufacturing operations in Dar es Salaam since 2004.  Songas offers an alternative and affordable form of energy and positions the company as an important regional energy producer”said Nigel Whittaker, Managing Director of Songas.

Mr Whittaker added; ‘The company has plans for possible expansion from the current 180MW to 250MW to meet the country’s growing demand for energy and to support the country’s industrialization agenda.’

Songas is currently the cheapest thermal generator of electricity in East Africa.  By using domestic gas instead of imported fuel, TPDC estimates that since Songas began its operations in 2004, it has saved the Tanzanian economy more thanTZS 11 trillion.