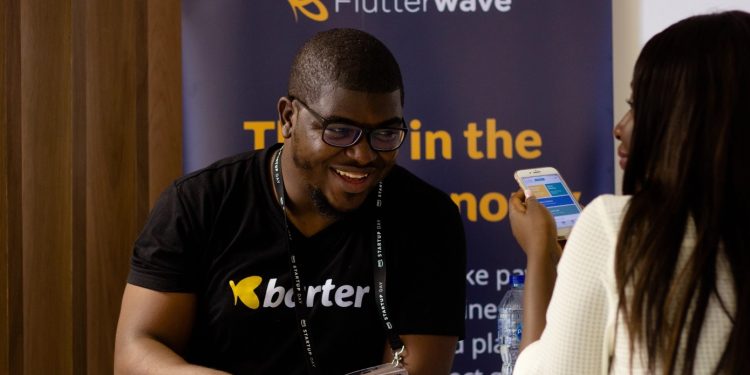 Serving a Flutterwave customer. The Flutterwave scandal is a stain on the Nigerian tech-unicorn that has received much praise in recent times. [Photo/TechCrunch]

Flutterwave CEO, Olugbenga Agboola, aka GB, is under scrutiny over the allegations which also include financial misconduct, insider trading and embezzlement.

The Flutterwave scandal is a stain on the Nigerian fintech unicorn that has received so much praise in recent times.

It’s not just a flutter, as one would call it, but the Flutterwave allegations are now causing butterflies in the African tech ecosystem’s stomach. The freedom that comes with growing a billion-dollar company is now being condemned to remaining a caterpillar with the Flutterwave news!!

Flutterwave CEO, Olugbenga Agboola, aka GB, is under scrutiny over the allegations which also include financial misconduct, insider trading and embezzlement.

These Flutterwave allegations could spook investors pouring their money into African start-ups and this is a reality until the Flutterwave scandal is discredited. If not, the whole tech ecosystem in Africa might lose out since there has been disquiet over corporate dysfunction and toxic work culture at Nigerian tech start-ups.

When Nigeria sneezes, Africa does catch a cold and the Flutterwave allegations are just the signs of a possible pandemic if not handled with care.

A week ago, Flutterwave news surfaced albeit in hushed tones after the Flutterwave allegations became public.

The Flutterwave CEO went on a damage control frenzy but the company’s denial of wrongdoing has not stopped Odero from openly standing by her assertions.

Odero, the CEO of a Softbank-backed Kenyan fintech company, Credrails, has vowed not to be silenced anymore.

“The Flutterwave CEO is bullying me and it ends today,” she wrote on April 4

In a revelation of the Flutterwave scandal, Odero wrote, “I have been constantly belittled, lied about, harassed, had my name tarnished and almost arrested because of Olugbenga Agboola the CEO of Flutterwave and I am calling time. It has been almost 5 years of constant harassment and I am over it all.” She said of the Nigerian fintech scandal.

She details her journey saying she decided to quit her job at Flutterwave in late 2018.

“A lot of things happened and in the end, I felt like I was not being treated well and rendered my resignation. Before the attempt to paint me as anything but a stellar employee is made, this, from the company Slack channel says otherwise,” she introduced a series of screenshots from the company’s workgroup which commended her achievements.

In the lengthy harassment disclosure claim on the Nigerian fintech scandal, Odero concludes :

I am sick of it, to be honest. It has been almost 5 years of constant bullying, trying to malign my name and just make my life more difficult. All of it stems from me deciding to leave, ask for what is fairly mine AND ask to be compensated for Flutterwave’s negligence.

I have never spoken about the sexual harassment claims at Flutterwave because I don’t have knowledge of them.

However, sexual impropriety is an issue of abuse of power; using the power you have over your subordinates to get sexual favours. The same power Olugbenga Agboola has been using to make my life so very hard for so very long simply because I stood up for myself.

It ends today. I am speaking up because when does it stop? When do I stop being the target of a powerful man trying to stick it to me for standing up for myself?

Odero’s depiction of her time at the company may have been influenced by an article that portrayed her negatively while extolling the virtues of Flutterwave’s unicorn trip.

When Agboola was interviewed on a retreat in Ghana earlier this year, the article based its findings on that interview. The Flutterwave scandal was yet to be a discussion beyond the tech Whatsapp group in Nigeria.

The Flutterwave allegations have seen the company go under public scrutiny for a variety of issues, including a supposedly, ethics probe by the US Securities and Exchange Commission (SEC) in 2018 that was not disclosed in this week’s report (Flutterwave is incorporated in Delaware and headquartered in California).

SEC, according to the explosive expose by David Hundeyin, refused to confirm or deny the probe, citing privacy laws. Former Flutterwave co-founder Iyinoluwa Aboyeji claimed there was one, but contested the Substack journalist’s description.

So, who is Olugbenga Agboola?

As per his LinkedIn profile, Olugbenga Agboola is the CEO and co-founder of Flutterwave, now a Nigerian fintech scandal. Olugbenga worked with PayPal, Standard Bank, and a number of other Internet startups and financial institutions prior to co-founding Flutterwave.

He is a seasoned entrepreneur who has made two successful exits. Because of his master’s degree in information technology security and behavioural engineering, he also holds an MBA in addition to his software engineer’s credentials.

As the man with the golden touch, ‘GB’ Agboola was irresistible to many companies in the tech space in Africa.

Lipa Later CEO, Eric Muli, on his appointment said, “Olugbenga Agboola is one of Africa’s leading fintech gurus, and we are major admirers of the work he has done on the continent. It’s an honour and a tribute to the work we’re doing here at Lipa Later to have GB on board.”

The BNPL Company seeks Agboola’s golden touch as it plans to take Africa by storm.

Under Agboola, Flutterwave has managed to complete the Series B Extension round of financing. MasterCard, CRE Ventures, Fintech Collective, 4DX Ventures and Raba Capital are investors in the latest round of his financing

‘GB’ Agboola is on the board of directors for the Corporate Council on Africa. He also chairs the Board of Directors at the Great Ife Alumni Association Inc, which constitutes Obafemi Awolowo University in Nigeria’s graduates and associates.

He also is a member of Fast Company’s Impact Council in 2019. The monthly American business magazine consists of entrepreneurs, corporate chieftains, technologists and designers. What will the Flutterwave scandal do to GB and Africa’s tech ecosystem? Will it lead to a cleaner and less toxic work environment or will it open up Pandora’s box?

Read: The Unicornization of African Fintech