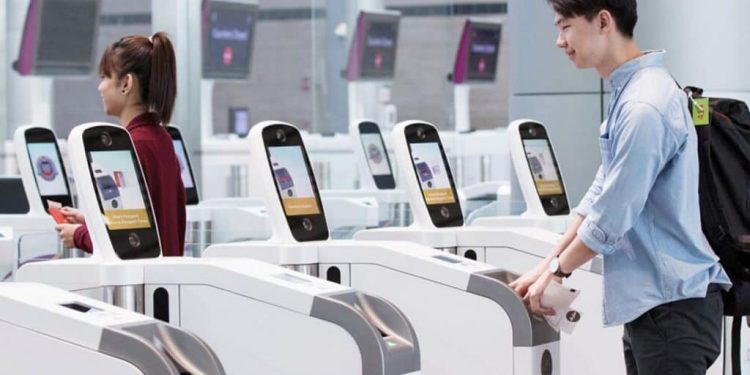 Biometric systems are expected to lead the market for airport security systems in growth over the next five years, as the market increases at an 8 per cent CAGR through 2024 (Photo/ Biometric Updates).

The aviation industry, without doubt remains on track to recover from the effects of the Covid-19 pandemic.

According to the Airports Council International, global passenger traffic is expected to improve significantly in 2022 forecasted to total 7.1 billion passengers globally.

According to an article published by Business AM on July 4, 2022, Africa is expected to continue to recover in 2022 and is expected to reach 77 per cent of 2019 levels by the end of the year. This will be an improvement from 51.6 per cent of the 2019 levels in 2021. It states further that Africa will remain part of the highly impacted regions due to reliance on international traffic. A full recovery to 2019 levels is expected in mid-to-late 2024.

Meanwhile, rising passenger expectations have put pressure on major transport hubs to bolster throughput, cut queues and make the journey from entrance to departure gate as seamless as possible.

Airports Council International lists some significant headwinds faced by the industry such as geopolitical conflicts, higher inflation, the risk of economic downturn, supply chain disruptions, labour shortages, and potential new outbreaks. African aviation will and is already being impacted by these headwinds. Navigating through them will be of utmost priority for all industry stakeholders.

There are three major factors listed by Phillips Consulting as shaping the global airline industry recovery. These are: the continuous relaxation or elimination of travel restrictions, a very significant rebound in air travel and passenger traffic (referred to as “revenge” travel by some; the unleashing of pent-up travel demand); and the recent surge in fuel prices are likely to become a threat to the recovery in demand.

According to Frontiers, AI has been recognized to have a wide potential to reduce human workload or increase human capabilities in complex scenarios, but today it is evident that AI also has an important role in transforming our life by promoting more efficient existing services or new services.

Governments are focusing on contactless travellers’ experience hence there have been innovations in biometric authentication at airports. For instance, Kenya ruled out paper verification of COVID-19 test results and vaccination certificates upon arrival, sparking local airlines’ adoption of electronic verification processes.

“These emerging technologies would enhance border officials’ judgment through AI-enabled intelligence in analyzing biometric markers such as facial recognition. Next in line, data analytics can help detect suspicious profiles by analyzing various data points that a passenger submits, right from booking an air ticket to applying for a visa and subsequent transit interface,” Vyas quoted in the article.

As early as June 28, 2020, HumAngle stated that Aerokeys Nigeria, an aviation service company, introduced AI robots that successfully performed facial recognition.  They also observed passengers with high temperatures attempting to board a plane, sound an alarm and identify the persons.

According to an article by This Day dated May 20, 2022, tech-infrastructure costs and support requirements deterred many smaller African airports from investing in digital systems. However, capable and scalable cloud-based technology has become significantly more affordable. It is now also well within reach of smaller, regional airports that need to meet the combined needs to be integrated into the global air transport system and to be able to instantly switch-on additional capacity.

In Africa, so much economic activity depends on airports having sufficient capacity to facilitate efficient, reliable, secure, and safe air transport services. By transforming the passenger experience and meeting their customers’ airlines demands for better efficiencies, smaller airports will be promoting themselves and the communities, industries, and markets they serve as safe, convenient, competitive, agile, and user-friendly destinations.

In addition, the air transport industry has encouraged governments, regulators, airport, and airline operators to embrace digital technology. The result has been the advent of things we now take for granted, such as customer self-service check-in and self-baggage drop solutions, smart-phone boarding passes and various mobile apps, digital health declarations and trusted travel passes for storing and verifying boarding passes and COVID-19 vaccination status, and more.

On a global level, CTIA was ranked forty-ninth out of 100 airports surveyed, a drop from its position of 33 that it held last year. KSIA slipped to fifty-ninth, from fifty-second last year and ORTIA fell to the seventy-first position, from 54 last year.