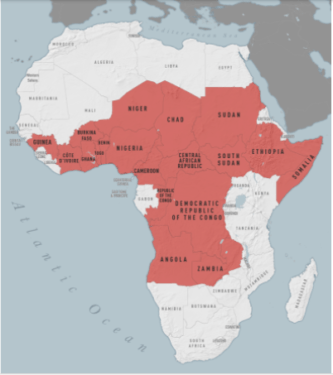 The Center for Disease Control and Prevention (CDC) defines polio as a disabling and life threatening disease caused by the poliovirus that can lead to permanent paralysis of various body parts and may ultimately cause death by immobilizing the patient’s breathing muscles.

by Alex
in Africa
0
Share on FacebookShare on LinkedIn

A complete state of physical, mental and social well-being that includes the absence of illnesses is one of the most valued things by human beings. It is no doubt that every human being will strive to avoid or alleviate illnesses to maintain a sound state of physical and mental health. Good health plays a pivotal role in promoting and safeguarding economic growth and development of a nation. In fact, citizens’ health has a direct bearing on economic growth and development of a nation.

There is no doubt that Africa bears a heavy disease burden which is a major source of its economic drawback. Most economies in Africa have been ravaged by diseases and currently some causing most deaths in Africa per 100,000 people per year include HIV/AIDS, diarrhoeal diseases, malaria, ischemic heart disease, meningitis, tuberculosis, diabetes mellitus, neonatal sepsis and infections, cirrhosis of the liver and epilepsy. Unbeknownst to many, poliomyelitis commonly referred to as “polio” has been a source of harm to the well-being of people and economies in Africa.

The Center for Disease Control and Prevention (CDC) defines polio as a disabling and life threatening disease caused by the poliovirus that can lead to permanent paralysis of various body parts and may ultimately cause death by immobilizing the patient’s breathing muscles. The poliovirus spreads from one person to another and can infect a person’s spinal cord resulting in paralysis. Polio is transmitted substantially through contaminated water, food or contact with an infected person.

Polio dates back to the early 20th century where it was most feared in developed countries. The disease paralysed thousands of children yearly, killing the hopes and aspirations of many generations. Akin to the current frenetic race in search of a COVID-19 vaccine, the global medical fraternity realising the damage that polio was causing, piloted and introduced a vaccine in 1950s and 1960s bringing polio to a control as a public health problem.

The disease then became prevalent in developing and least developed countries  in the 1970s leading to a major global routine immunization programme. This effectively put brakes to the rapid spread of the disease in most low-income countries. Sadly, the disease was not brought to a permanent halt. Africa then became the epicentre of wild poliovirus with two out of the three strains of the wild poliovirus being annihilated worldwide. The recent declaration by World Health Organization (WHO) that Africa is now free of the wild poliovirus has come as a major sigh of relief. Today, only Pakistan and Afghanistan are reporting wild poliovirus type 1. Initially, nearly 75,000 children under the age of five years would have been paralysed by wild poliovirus in Africa annually.

The announcement by the independent Africa Regional Certification Commission (ARCC) on 25th August that the WHO African region is free of wild poliovirus was met with instant ululations and jubilations. It was a confirmation that no African child was claimed by polio in the last three years, saving nearly over 225,000 African children from this plague – the fight against polio was bearing fruits and the returns were visible. It was in 2016 that the last case of wild polio was reported in Nigeria – the last one of the continent where the disease was endemic.

The eradication of polio in Africa has been one long and arduous voyage. In the mid-1970s, only a few countries recorded immunization activities and by this time, cases in Africa were surging past the 168,000 mark – a figure that was higher than earlier suspected.

In 1988, the fight for eradication of polio was gaining momentum and the World Health Assembly adopted a resolution for its eradication. This is where the rubber met the road in the war against polio marking the launch of the Global Polio Eradication Initiative (GPEI). This multi-stakeholder initiative was spearheaded by WHO, Rotary International, national governments, the CDC, UNICEF, Bill & Melinda Gates Foundation and Gavi, the Vaccine Alliance. According to WHO, this initiative has decreased wild poliovirus cases by over 99% since 1988 from an estimated  350,000 cases in more than 125 endemic countries then to 175 reported cases in 2019. 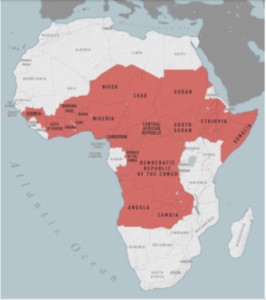 Map: Countries in Africa where a booster dose of polio vaccine is recommended before travel (Source CDC)

The poliovirus infections hit all countries across Africa paralysing over 75,000 children in 1995. It was worsened by conflicts and political instabilities in some parts of the continent. This triggered a new campaign in 1996 spearheaded by former South African President Nelson Mandela dubbed “Kick Polio Out of Africa” whose main objective was to ensure that children below five years are vaccinated. In 2000, the campaigns for kicking polio out of Africa continued in earnest in 17 countries with 76 million children being inoculated. The vaccination efforts expanded to 24 countries mostly in western and central Africa where an outbreak was causing havoc.

This initiative led to a large-scale, multi-national vaccination of 85 million children. The success of the polio eradication efforts in Africa can be attributed to vaccination efforts that have so far reached every child in every remote community. The strengthening of disease surveillance and laboratory networks in Africa has also bolstered polio eradication efforts by building a robust and sensitive epidemiological surveillance system with a network of well-equipped laboratories and thousands of specially trained personnel who were the continent’s frontline workers. The concerted efforts reached communities through social mobilisation and communication networks making it possible for vaccination efforts to reach marginalized or conflict ridden communities in Africa. This way, polio programmes faced less resistance and became widely accepted. The continent’s success in the fight against polio is also attributed to the improved outbreak response capacity supported by WHO and other partners involved in emergency responses.

While significant strides were made in overcoming the polio outbreak, challenges such as insecurity, conflicts, wars, weak health systems and poor sanitation slowed down the eradication efforts. In 1999, the former UN Secretary General the late Kofi Annan negotiated a ceasefire between the DRC government and rebel forces to allow for national immunization campaigns across the country. Political instabilities exacerbated the problem leading to full blown polio outbreaks in some parts of Africa. This is why in curbing polio and other infectious diseases the AU has been steadfast in “silencing the guns” to create a conducive environment for socio-economic development.

The challenge now remains with African governments to reallocate new commitments and resources to build on this legacy and to ensure that efforts to fully eradicate polio from Africa are not lost, but instead used to strengthen public health systems for generations to come.

The writer is an economist and a commentator on trade and investment.