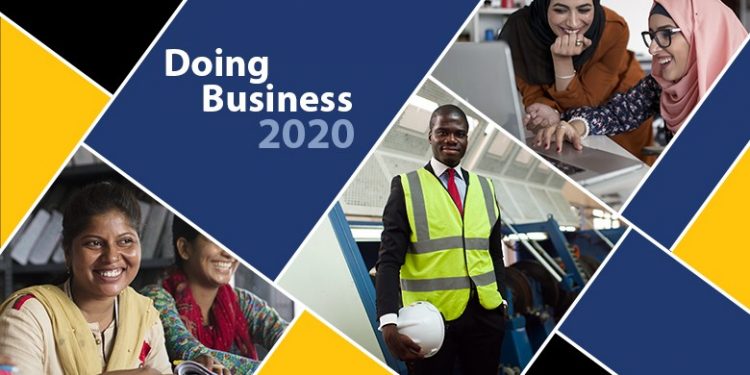 Doing Business 2020: How Did Africa Do? SOURCE: https://www.linkedin.com/pulse/doing-business-2020-how-did-africa-do-mark-anthony-johnson/

The Doing Business 2020 study shows that developing economies are catching up with developed economies in the ease of doing business. 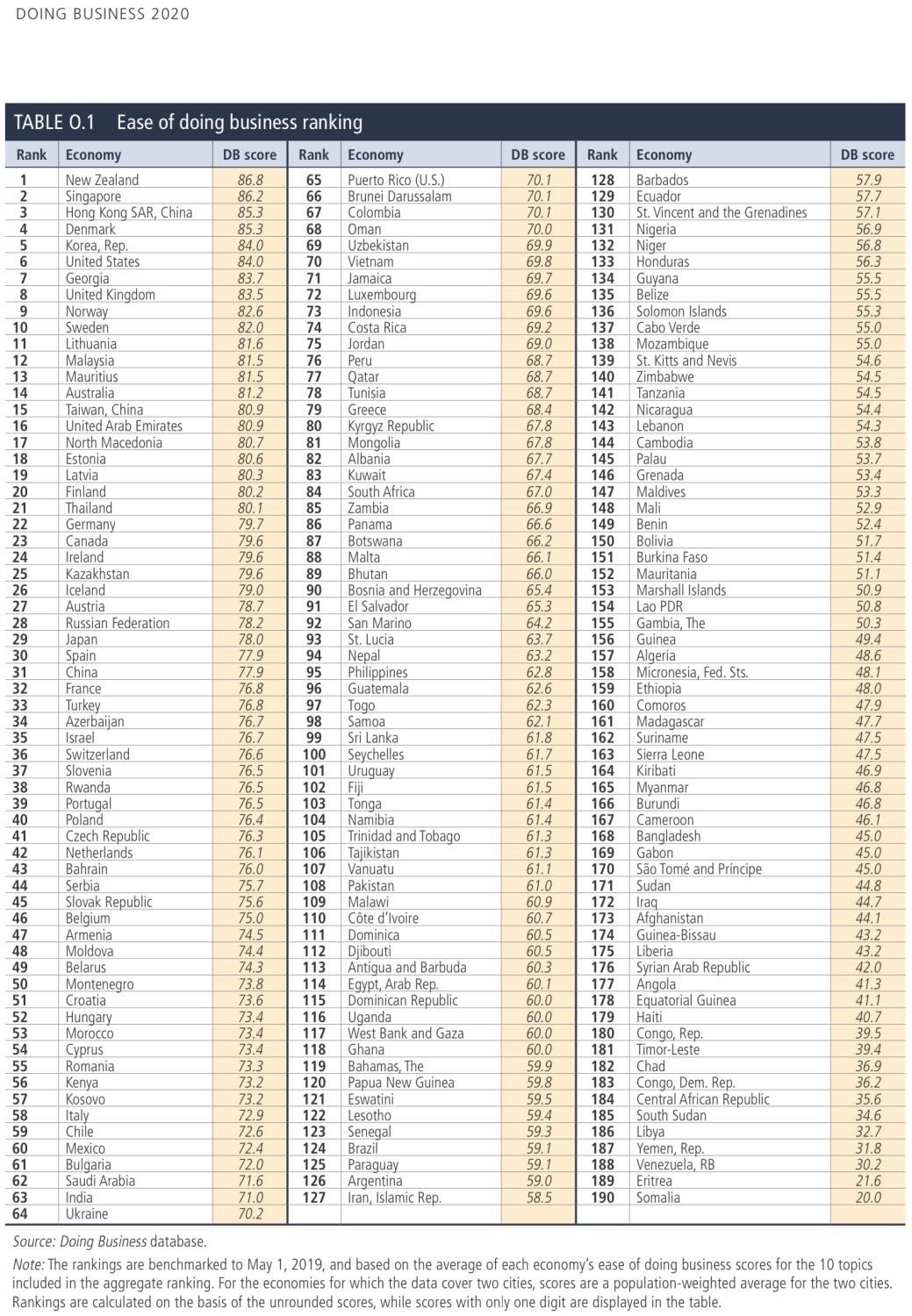 Still, the gap remains wide. An entrepreneur in a low-income economy typically spends around 50 per cent of the country’s per-capita income to launch a company, compared with just 4.2 per cent for an entrepreneur in a high- income economy. It takes nearly six times as long on average to start a business in the economies ranked in the bottom 50 as in the top 20.

There’s ample room for developing economies to catch up with developed countries on most of the Doing Business indicators. Performance in the area of legal rights, for example, remains weakest among low- and middle-income economies.

Doing Business recognizes the important work countries have done to improve their regulatory environments. Among the 10 economies that advanced the most, efforts were focused on the areas of starting a business, dealing with construction permits and trading across borders. In general, economies that score the highest share several features, including the widespread use of electronic systems and online platforms to comply with regulatory requirements.

At the same time, the least reformed area was resolving insolvency. Putting in place reorganization procedures reduces the failure rates of small and medium-sized enterprises and prevents the liquidation of insolvent but viable businesses.

Doing Business is a valuable tool that governments can use to design sound regulatory policies. By giving policymakers a way to benchmark progress, it stimulates policy debate, both by exposing potential challenges and by identifying good practices and lessons learned.

It’s important to note that Doing Business isn’t meant to be an investment guide, but rather a measurement of ease of doing business. Potential investors consider many other factors, such as the overall quality of an economy’s business environment and its national competitiveness, macroeconomic stability, development of the financial system, market size, rule of law, and the quality of the labor force.

Economies in Sub-Saharan Africa continued to improve their business climates, with the region’s largest economy, Nigeria, earning a place among the year’s top global improvers alongside Togo, according to the World Bank Group’s Doing Business study.

Economies of the region enacted 73 reforms in the 12 months leading to May 1, down from a record high of 108, and the number of countries implementing at least one reform fell to 31 from 40. The regional average ease of doing business score was 51.8 on a scale of 0 to 100, below the OECD high-income average of 78.4 and the global average of 63.0.

There were several bright spots in the region. Togo is on the list of top improvers for the second year in a row thanks to reforms lowering fees for construction permits and streamlining property registration procedures, among other measures. Nigeria conducted reforms impacting six indicators, including making the enforcement of contracts easier, which placed the 200-million-person economy among the world’s top improvers. 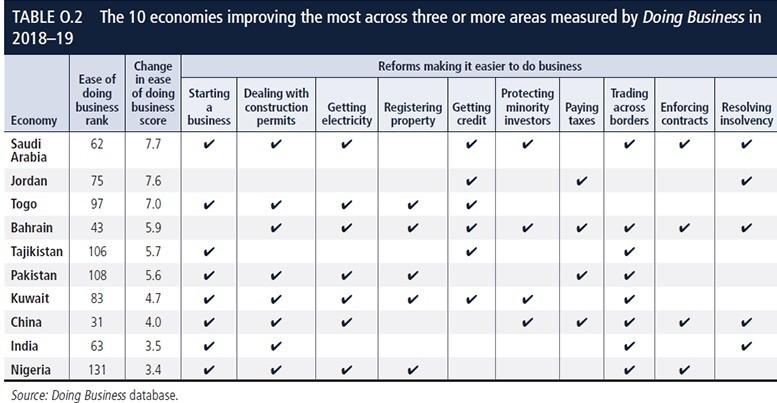 Kenya also carried out six reforms, including improving the reliability of its electricity supply and introducing an online system for social security contributions, positioning it third highest in the regional rankings, behind Mauritius and Rwanda. With four reforms implemented this year, Mauritius remains the easiest place to do business in the region, ranking 13th  globally. Among other reforms, the country made resolving insolvency easier and improved contract enforcement.

Elsewhere, Cabo Verde and Eswatini each carried out four reforms, a record for both. Zimbabwe improved in five areas measured by Doing Business while the Democratic Republic of Congo, Gabon and Rwanda advanced in three. Due to active reform efforts, Niger’s and Senegal’s scores improved significantly.

The region conducted the most reforms in the areas of starting a business, dealing with construction permits and getting credit, with twelve reforms in each. Thanks to initiatives led by the Central African Economic and Monetary Community, getting credit became easier in several economies in the region.

The region’s economies performed best in the areas of starting a business and getting credit, with three economies – Kenya, Rwanda and Zambia – ranking among the world’s top 10 in the latter category. On average, it now takes around 20 days and costs 33.5% of income per capita to start a new business in the region, substantially faster and less expensive than the 62 days and 305% of income per capita it took in 2003.

“With reforms led by the Organization for the Harmonization of Business Law in Africa last year and the Central African Economic and Monetary Community this year, economies in Sub-Saharan Africa have demonstrated how regional cooperation can help to effectively improve the business climate,” said Santiago Croci Downes, Program Manager of the Doing Business Unit.

Despite advancements, the pace of reforms across the region has slowed overall, and there is scope to improve performance, reform impact, and implementation. Only two Sub-Saharan African economies rank in the top 50 on the ease of doing business rankings while most of the bottom 20 economies in the global rankings are from the region. South Africa implemented a single reform this year and four in the past five years. Liberia has

Compared to other parts of the world, Sub-Saharan Africa still underperforms in several areas. In getting electricity, for example, businesses must pay more than 3,100% per cent of income per capita to connect to the grid, compared to just over 400% in the Middle East and North Africa or 272% per cent in Europe and Central Asia. When it comes to trading across borders and paying taxes, businesses spend about 96 hours to comply with documentary requirements to import, versus 3.4 hours in OECD high-income economies, and small and medium-sized businesses in their second year of operation need to pay taxes more than 36 times a year, compared to an average of 23 times globally.

Here are the best African countries for doing business in 2020: