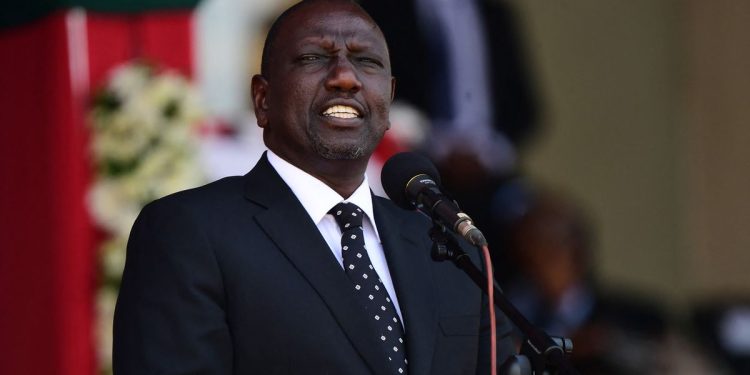 Investors have proved their confidence in Kenya’s fifth president William Ruto as the Nairobi Stock Exchange (NSE) shot through the roof to record the highest single day raise in over four and a half years. [Photo/Bloomberg[

NSE market update: On Wednesday, Sep 7, investors proved their confidence in Kenya’s new president William Ruto as the Nairobi Stock Exchange (NSE) shot through the roof to record the highest single day raise in over four and a half years.

Local media confirmed the NSE market gained Sh102.6 billion describing the leap as ‘the biggest single-day jump in four-and-a-half years.’ This jump comes in the wake of settling election dust that saw the NSE stumble, fall and now, rise up again.

Sector pundits and political analysts agree that this huge gain is a clear signal of investor’s confidence in the fifth president of Kenya.

In fact, the last time the NSE scored a similar single-day gain was way back in 2018 when there was an almost mirror effect of the political situation. Back then, the NSE market had all but collapsed during the election turmoil but as soon as former President Uhuru Kenyatta and shook hands with his rival Raila Odinga, the stocks went through the roof.

This time, as was the case the half a decade ago, investors feared that the contest against the election results might spiral out of control. Back in 2017, the decision to annul the poll led to a market crash that was only relieved when the opposing teams shook hands.

“This week’s gains are therefore reflective of relief among investors,” Kenya media commented.

In expression of their confidence, local investors put their money back into the NSE buying blue chips, which are customarily dominated by foreign investors. Foreign investors are yet to express similar confidence as their local counterparts as records show net outflows clocked Sh38 million compared to net inflows of Sh28 million as of Monday.

As of the close of the market day Monday, total capitalization recorded was Sh2.295 trillion, up from Sh2.192 trillion and the benchmark NSE 20 Share Index closed the day with 1807 points, two percent higher.

Movers and shakers of NSE rebound

The largest gainer of the NSE come back was Safaricom spotting an impressive Sh80 billion value addition. The telecom giant was able to pull the stunt off thanks to a Sh2 per share gain closing the day at an impressive Sh31.05 per share.

Proving once again that its share price movement is the actual market driver on the NSE, Safaricom issued Sh40 billion worth of shares that sold out and in effect made the company the biggest gainer and in turn moved the entire market up.

A sweep of the key NSE players shows that all major stock holders, especially banks enjoyed a considerable hike in share value. Equity Group, the second largest player on the NSE enjoyed a jump in excess of 35 percent pocketing net profits close to Sh23.7 billion.

Before this impressive come back, only a few weeks ago in August the NSE stock prices maintained a steady fall, this despite higher earnings in some key bank stocks. During that period, the Nairobi bourse lost a whopping Sh103.8 billion in just one week.

Even then, the drop was caused largely fall of share prices of big banks and of course, Safaricom. When bank shares drop as they did, it is clear sign of investor loss of confidence since bank stocks are normally sensitive to industry performance.

The overall result was that the banks had to pay higher dividends yet suffer low share prices saw the market suffer losses to the tune of Sh28.3 billion. The larger they are the harder they fall, suffering Sh28.04 billion in losses.

Earlier on as of Aug 11 in the wake of the elections, the stock market reopened with a gain of Sh31.8 billion with at least 24 of the 63 listed stocks showing a positive come back owing to local investors scooping up the low-priced shares.

The recovering shilling and lower cost of living

It is during this same period, around Aug 9th that the Kenyan shilling fell against the dollar to triggering costly imports and higher international debt repayments ahead. At that time, the Central bank of Kenya (CBK) placed the value of the shilling at 119.13 units against a strong dollar.

The shilling depreciated 1.47 percent forcing importers to spend more and in effect raising the cost of inputs and subsequently raising the final price, a cost to be borne by the end consumers.

Official data painted the gruesome state as imports rose 20.87 percent year-on-year to Sh194 billion compared to an 11.21 percent rise in exports to Sh60.41 billion. The difference here is that exporters, who are generally paid in dollars, were able to enjoy the gains of the strong dollar against the weaker shilling.

However, on the ground this meant that the cost of living for the average Kenyan increased considerably. The lower value of the shilling caused the price of imported raw materials to rise which in effect caused the rise of basic needs all the way from electricity to food prices.

With the elections over and the court ruling passed, the market is stabilizing and the shilling is recovering. As a result of the shilling gaining on the dollar, the general cost of living is slowly but surely starting to level out.

As the fifth administration settles in, investors continue to regain confidence in the market and as evident in the NSE, trading is strengthening. The end result is a steady recovery of the shilling against the dollar which in turn is bringing down the cost of life.

What is expected in the course of the next few months is that the market will continue to stabilize and as the new administration announces its economic development plans including newer ease of doing business policies, investors will further gain confidence and the economy will grow.