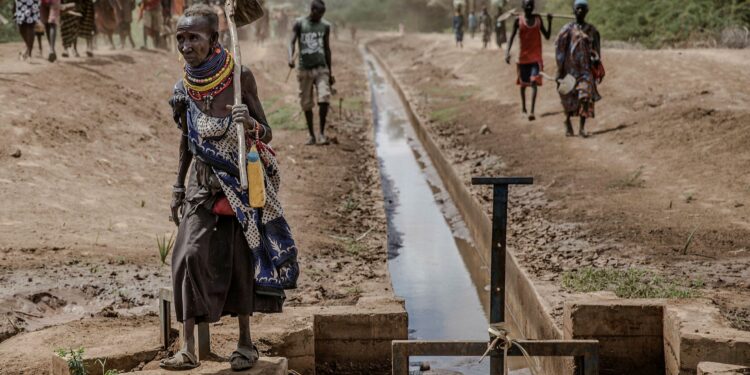 Climate change is costing Africa billions in adaptation and mitigation as the region becomes more vulnerable to climate impacts.

Climate change in Africa costs a lot, and climate extremes hit the region hardest. Between 2014 and 2018, roughly $5 per year, a person was the adaptation funding to each African – standing on less than $5.5 billion per year (World Economic Forum).

It is more than fair to say without financial support, climate change will probably push Africa’s impoverishment to a whole new level, as millions of Africa might be into extreme poverty by 2030.

The latter proves Africa to be at a relatively disadvantageous position as it contributes the least to global emissions and climate change. Yet, it receives minor financial support towards adaption.

Despite promising to double funding, high-income countries (and high global emitters) failed to live up to their commitment to providing $100 billion in climate finance per year to low-and middle-income countries.

The commitment stretches from 2009, when the world’s wealthier nations gave their pledge but have ended up providing $20 billion less.

The climate finance landscape stands to bring haven or doom to least-developed countries as they become more vulnerable to the impacts of climate change. Niger, Somalia, Chad, Sudan and Libera rank among the most vulnerable countries in the world (World Economic Forum).

African fastest-growing economies such as Ethiopia arguably contribute the least to global greenhouse-gas emissions. Still, its expenses on dealing with climate change impact amount to billions of dollars (Bloomberg News).

Africa’s second populated country—Ethiopia, will spend 5.6 per cent of its gross domestic product, or $6 billion, each year until 2030 to counter the impacts of floods, climate-driven diseases, hailstorms and wildfires (Bloomberg News).

Further down the research report, Africa’s second top and most industrialized economy—South Africa and, unfortunately, the region’s major polluter- is set to spend more than $2 billion a year, equal to 0.7 per cent of its GDP, investing in it in measures to limit damages.

“The seven countries plan to spend an average of 4 per cent of their GDP on adaptation annually, ranging from $90 million in Sierra Leone – where citizens generate an 80th of the carbon dioxide that can be attributed to the average American – to what Ethiopia will spend. African nations, mostly on account of their lack of industrialization, generally emit little carbon dioxide” according to Bloomberg News, analysis of the research report.

On the other hand, Institute for Security Studies (ISS) paint climate finance as a crucial aspect for Southern Africa as it chokes the life out of economies.

The institution argued that the 16 Southern African Development Community (SADC) member states recorded 36 per cent of all weather-related disasters in Africa in the past four decades.

READ: In climate change mitigation, Africa is largely on its own

There is a twist to understanding the nature of climate finance in the region. World Economic Forum (WEF) noted that quantity and neglect of some sectors are just a couple of ways in which finance for adaptation to climate change in Africa falls short.

The ISS also noted the disparity observed in climate finance across the world. Between 2016 and 2019, Africa received only 26 per cent of available financing.

“Three-quarters of that was in the form of loans and another non-grant instrument that must be repaid. Most has been directed towards cutting emissions (mitigations), with adaption assigned only 21 per cent of global climate funding in 2018,” ISS argued.

On the other isle, WEF provided essential insights into the actual scenario of climate finance performance and what works and what doesn’t in the region.

According to WEF, there is a need mismatch for adaptation finance. It is factual that sub-Saharan Africa will face the highest adaptation costs per unit of GDP.

WEF added that – the latter is attributed to lower GDPs and higher adaptation costs for water resources due to changes in precipitation patterns.

Prioritization is another factor that plays a massive role in the African climate finance landscape. Most funding goes towards the most vulnerable sectors to climate change—agriculture and water supply sectors receive half of the adaptation-related funding.

For the record, funding, education, health and biodiversity, and gender issues are critical sectors that provided better resiliency mechanisms against climate change.

The fate of Africa relies upon the region’s government’s commitment towards allocating available funding to the right sectors.

READ: Climate change: How did Africa fare at COP26?