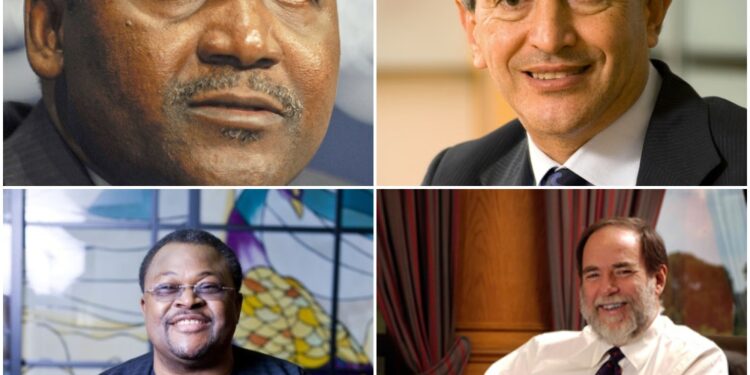 Despite the Coronavirus pandemic, the continent's 18 billionaires’ combined worth is 15 per cent more than it was in 2021, standing at roughly $84.9 billion.

by Joseph Kangethe
in Africa, Africa billionaires, Business
0
Share on FacebookShare on LinkedIn

The African economy is not doing so well. But that does not mean so are all the people on the continent!

Aliko Dangote, a business magnate in Nigeria, has topped the 2022 Forbes list of the richest men in Africa for the eleventh consecutive time.

Despite the Coronavirus pandemic, the continent’s 18 billionaires’ combined worth is 15 per cent more than it was in 2021, standing at roughly $84.9 billion.

On average, the continent’s billionaires are worth $4.7 billion now compared to the $3.4 billion in 2014.

Soaring stock prices across sub-Saharan Africa have lifted the worth of these business moguls. These tycoons’ industries cut across manufacturing, construction and engineering, telecoms, mining, fashion and retail, food and beverages, media, banking and insurance, and investments, among other diversified sources.

Here is a list of the 18 billionaires in Africa as ranked by net worth.

The 64-year-old richest man in Nigeria tops the 2022 Forbes list for the richest men in Africa for the seventh time in a row. His wealth increased exponentially, from $10.1 billion in 2020, $12.1 billion in 2021, and 13.9 billion in 2022. Aliko’s wealth comes from cement and sugar in the manufacturing industry.

Dangote told Forbes that his business drive came from his grandfather, successful rice and oats farmer. He said that he would buy sweets, give them to his peers to sell when he was young, and keep the profits. Quite ambitious!

Johan Ruppert is the chairman of Compagnie Financiere Richemont, a Swiss luxury goods firm that deals in fashion and retail.

He has shares in the Anthonij Rupert Wines (named after his deceased brother) and Saracens English rugby team. The 71-year-old says his biggest regret in life was not buying half of Gucci when the opportunity arose at just $175 million.

The South African, heir to his family’s fortune, cemented his position in the billionaires’ club in 2012 when he sold off 40 per cent of his share in the diamond firm De Beers to Anglo American for $5.1 billion.

Oppenheimer started Johannesburg-based Fireblade Aviation in 2014, which operates charter flights with its fleet of four planes and two helicopters. He also owns 720 square miles of conservation land across South Africa, Zimbabwe and Botswana.

The origin of his wealth has come mainly from chemicals, construction, and engineering. The Sawiris is the wealthiest family in Egypt. His brother Naguib Sawiris is also making it to this list.

The family split Orascom Construction Limited into two entities, with Nassef running the OCI entity, one of the world’s largest nitrogen fertiliser producers.

The 60-year-old sits on the supervisory board of Adidas. He also has shares in the cement giant Lafarge Holcim.

Cement and sugar production has propelled Abdulsamad to overtake Mike Adenuga to the second richest man in Nigeria. His worth has risen from $3.1 billion to $7 billion in 2022, arguably the best performer on the list.

The 61-year-old is the founder of BUA Group in Nigeria, a conglomerate active in cement production, sugar refining, and real estate.

The Master’s degree holder in Business Administration has built his wealth through telecom and oil production. However, his wealth has reduced from $7.7 billion in 2020 to a current wealth of $6.7 billion, making him the third richest man in Nigeria.

His mobile phone network, Globacom, is the third-largest operator in Nigeria, with over 60 million subscribers. His oil exploration company, Conoil Producing, operates six oil blocks in the Niger Delta.

Issad Rebrab is the CEO of Cevital, the most significant privately-held company in Algeria. His net worth has been rising gradually from $4.4 billion in 2020 to $5.1 billion in 2022.

He has built his wealth through the food and beverage industry. Cevital owns one of the largest sugar refineries globally, producing two million tonnes every year.

He has built his fortune in telecom, selling Orascom Telecom in 2011 to Russian telecom firm VimpelCom (now Veon) in a multibillion-dollar transaction.

Through his Media Globe Holdings, Naguib Sawiris owns 88 per cent of pan-European pay-TV and video news network Euronews. He also developed a luxury resort called Silversands on the Caribbean Island of Grenada.

Metals and mining have sustained his wealth. He is the founder and chairman of African Rainbow Minerals. The company is under his equity firm, African Rainbow Capital, which focuses on investing in Africa.

Patrice Motsepe also has a stake in Sanlam, a listed financial services firm, and owns the Mamelodi Sundowns Football Club. In 1997, he bought low-producing gold mine shafts and later became profitable.

He was the first black partner at Bowman Gilfillan, a law firm in Johannesburg,

Koos is the wealthiest African, earning from media and entertainment. His worth is currently estimated at $2.7billion.

The 69-year-old revolutionised Naspers, a South African newspaper publisher, into an eCommerce investor and cable TV powerhouse. His most significant and most profitable bet led Naspers to invest in Tencent, a Chinese Internet and Media firm.

However, Becker sold more than 70 per cent of his Naspers shares.

The Zimbabwean national has been rising the billionaires’ rankings. From 19th in 2020 with a worth of $1.1 billion, he now ranks 10th with an estimated net worth of $2.7 billion.

His wealth has been mainly contributed to by the success of his mobile phone network, Econet Wireless Zimbabwe. He owns over 50 per cent of the network.

He also owns half of Liquid Telecom, which offers fibre optics and satellite services to telecom firms across the continent.

The Egyptian’s wealth has decreased from $3.3 billion in 2020 to $2.5 billion in the 2022 Forbes billionaires list. He oversees the Mansour’s family Mansour Group, one of the most prominent General motors distributors globally.

Mansour Group also holds exclusive rights for Caterpillar equipment distribution in Egypt and seven other countries. Mohamed served as Egypt’s Minister of Transportation from 2006 to 2009 under the Hosni Mubarak regime.

His estimated net worth currently stands at $2.2 billion. The 61-year-old is the majority owner of Akwa Group, a multibillion-dollar conglomerate founded by his father and a partner, Ahmed Wakrim.

Akwa Group deals with petroleum, gas and chemicals. Aziz is the Minister of Agriculture and fisheries in Morocco.

The South African net worth is estimated at $1.7 billion. He is the founder of Capitec Bank,  which trades on the Johannesburg  Stock Exchange, and owns about 11 per cent stake.

Othman has a net worth of $1.5 billion. He is the CEO of BMCE Bank of Africa, serving more than 20 African countries.

Benjelloun built RMA into a leading insurance company in Morocco. Through his holding company FinanceCom, he has a stake in the Moroccan arm of French telecom firm Orange. His wealth has been driven by finance and investments.

He is the only Tanzanian to make it to the list at $1.5 billion. Mohammed is the CEO of MeTL, a Tanzanian conglomerate that deals in textile manufacturing, flour milling, beverages and oils in Africa.

MeTL operates in more than six African countries, and the CEO is eyeing expanding to several others. Mohammed signed the Giving Pledge in 2016, promising to donate at least half his fortune to philanthropic causes.

His wealth has dropped from $1.9 billion in 2020 to $1.5 billion in the current Forbes report. He is the brother to Mohamed Mansour and chairman of the car dealer conglomerate Mansour group.

He oversees the consumer goods division, including supermarket chain Metro, and sole distribution rights for L’Oreal in Egypt.

Yasseen Mansour closes the billionaires’ list in Africa with his net worth of $1.5 billion. He is a shareholder in family-owned conglomerate Mansour Group, founded by his father Loutfy in 1952. In Mansour Group, he is chairman of Palm Hills Developments, one of Egypt’s most prominent real estate developers.

We are looking forward to the next year to see whether there will be new faces on the billionaires’ list in Arica.