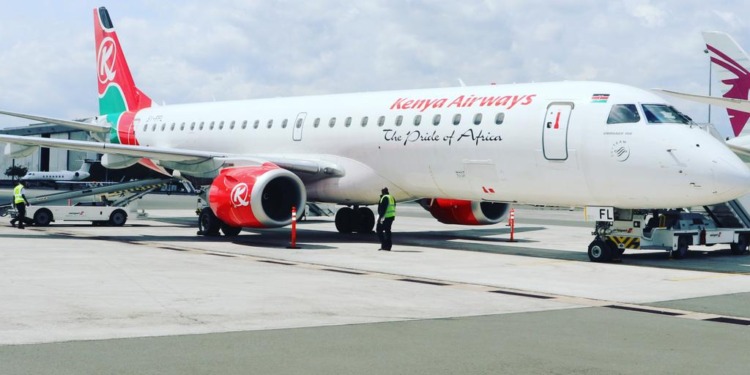 Kenya’s national carrier Kenya Airways (KQ) and South Africa Airways (SAA) have entered a memorandum of cooperation with a longer-term view to co-starting a Pan-African Airline Group that in time will enhance mutual growth potential between the two carriers.

In a statement, KQ said the cooperation aligns with core purpose of ‘Contributing to the sustainable development of Africa’.

The airline added that the agreement would be based on mutual benefits, including strategic positioning in global aviation, diversifying earning streams, and reinforcing regional partnership in Africa through diplomatic and commercial relations.

These benefits are expected to translate into an increase in passenger traffic, cargo opportunities, and general trade by taking advantage of strengths in South Africa, Kenya, and Africa.

Commenting on the development, Kenya Airways Group Managing Director and Chief Executive Officer Allan Kilavuka, highlighted the partnership’s significance in turning around the fortunes of both KQ and SAA.

“The future of aviation and its long-term sustenance is hinged on cooperation. KQ and SAA collaboration will enhance customer benefits by availing a larger combined passenger and Cargo network, fostering the exchange of expertise, innovation, best practice, and adopting home-grown organic solutions to technical and operational challenges,” he said.

The Kenyan carrier said it remains committed to its financial turnaround strategy, adding that the pursuit of partnerships is one of the core strategic pillars that shall transform the airline by ensuring its financial viability while offering world class services in Africa and the world.

SAA’s Interim CEO Thomas Kgokolo noted that the cooperation, which includes demand recovery and other cost containment strategies, will aid recovery of both carriers in an increasingly competitive African airline environment.

“KQ and SAA, as iconic airline brands of Africa’s biggest and vibrant economies, in East Africa and Southern Africa respectively, are at the precipice of what could be Africa’s formidable Pan African airline,” he said.

“The respective Kenyan and South African governments recognise KQ and SAA as strategic national assets. They are committed to providing an operating environment that will allow for commercial agility and flexibility, shared access to domestic and international markets for the carriers’ mutual benefit,” the statement said.

Kgokolo added that collaboration will also assist both airlines in the current and post-pandemic business and travel environment.

This he said involves, joint recovery strategies and other cost containment strategies that will aid recovery of both carriers in an increasing competitive African airline environment.

The agreement however, does not offer an exclusivity that precludes either of the airlines from pursuing commercial co-operation with other carriers within the current route network strategy.

This cooperation will also seek to address the significant contraction witnessed in the history of the air transport market in the wake of COVID-19.

The African air transport market is estimated to be 50% of 2019 (pre-COVID-19), and the situation is expected to last for at least three years.

Early this year, Kenya Airways’ net loss nearly tripled to Sh36.2 billion, the worst ever in the history of the airline, on account of Covid-19 disruptions that led to a sharp decline in passenger numbers.

According to a report filed by Business Daily, the loss, for the financial year ended December 2020, was 2.8 times more than the Sh12.98 billion net loss it had posted a year earlier.

At the time, KQ chairman Michael Joseph said the outlook still looked bleak adding that KQ would be seeking a right-sized network to match the prevailing demand.

On the other hand,  SAA has just resumed operations after an 18 month hiatus.

The airline has just emerged from bankruptcy, after receiving a bailout from the South African government to begin restructuring.