Ethiopia is building bridges to empower its 110 million people

by Njenga Hakeenah
in Business
0 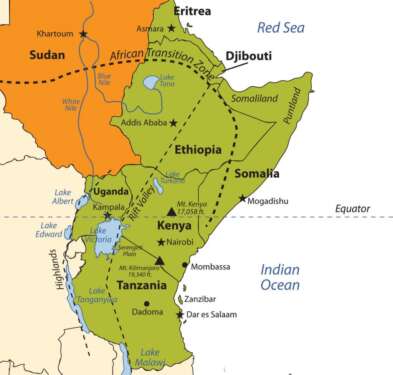 A map of Eastern Africa neighbours Kenya, Ethiopia and Somalia. Working together will enable the region reap benefits of a unified market. [Photo/Guest Hollow]

While Kenya and Somalia are at diplomatic loggerheads which is no doubt ruining the economic aspects of both nations, Ethiopia is building bridges to empower its 110 million people.

As one of Africa’s most populous nations, Ethiopia needs all the resources it can scrape together to help it build an economy that can support its growing population and which the rest of the continent can reckon with.

As such, the country which has remained conservative is now opening up attracting the resources it needs to jumpstart its economy.

A testament to this is that the East African nation is among those who attracted the highest Foreign Direct Investment (FDI) in Africa in 2019. For the year, Ethiopia beat Kenya to rake in US$2.5 billion which was a 24 per cent decline from the previous year.

The biggest FDI flows to African countries in 2019 went to Nigeria, South Africa and Egypt which received more than US$3 billion each.

With the damper on FDI for Ethiopia, the country is looking outwards and the first inclination towards opening up its economy to its neighbours is the launch of the Moyale One-Stop Border Post (OSBP).

The OSBP is along the 500-kilometre Hawassa-Hagere Mariam-Moyale Road which forms part of the Trans African Highway. It is also a key segment of the Mombasa-Nairobi-Addis Ababa transport corridor.

During the launch of the OSBP on December 9, 2020, President Uhuru Kenyatta and Ethiopian Prime Minister Abiy Ahmed assured business communities from both countries that the opening up of the two countries’ border would enable easier doing of business boosting cross-border trade.

Prime Minister Abiy enthused that the Moyale OSBP will help expedite the movement of goods and people across the Kenya-Ethiopia border.

The PM said that the artificial border will be dismantled with the new infrastructure (OSBP). He added that Kenyans and Ethiopians will get closer together which will enable them to tap the potential and opportunities of business and economy.

With terrorist attacks not being too far off for the two countries, PM Abiy said that both countries will continue working together on infrastructure and in the maintenance of peace and security along the border region.

The Eastern Africa region has huge untapped potential for trade and investment with limited cross-border trade which when opened up could economically lift local business communities.

While Kenyatta promised to work closely with Kenya’s neighbours to eliminate the identified trade barriers to increase the flow of business across regional borders, this remains an uphill task.

Kenya’s top markets for export are in Africa but Ethiopia is not among the top five. Kenya’s exports to Ethiopia include insecticides, rodenticides, fungicides, made-up textile materials, aluminium, medicaments and household equipment of base metals among other manufactured products.

For perspective, Uganda is Kenya’s biggest export market followed by Pakistan, the United States, the Netherlands and the United Kingdom.  African countries take a combined market share of US$2 billion (Kshs 231.4 billion) which represents 46.1 per cent, followed by Europe and Asia at US$1 billion each.

Ironically, and in comparison to Uganda, Ethiopia is the fourth largest economy in Sub-Saharan Africa with predictions that it will be the third-largest economy in Africa by 2025. By overtaking Angola, jointly Kenya and Ethiopia provide a market of close to 150 million people.

For decades, Kenya and Ethiopia have endured subdued bilateral trade due to non-tariff barriers including long bureaucratic procedures, bans and sanctions. But with the direction trade and economics are taking, the two countries have a lucrative opportunity to exploit for the growth of their economies.

On the other hand, Somalia is at risk of being left behind by these two economic powerhouses if the grandstanding continues.

Kenya and Somalia are working out on ironing out their diplomatic differences but the long-drawn-out battle is proving detrimental to both countries’ economies.

As it is, Somalia has lost its sheen as an export market for Kenya’s goods. While Kenya has invested heavily in restoring political stability in the Horn of Africa nation, the gesture has not been reciprocated.

This year, Kenya’s earnings from Somalia dropped to a decade–low where miraa (khat) shed US$30 million to stand at US$110 million.

During the 38th Extra-Ordinary Summit of the Assembly of Heads of State and Government of the Intergovernmental Authority on Development (IGAD) held in Djibouti on December 20, the African Union Commission (AUC) Chairperson Moussa Faki Mahamat said the diplomatic tension between Kenya and Somalia was a concern for the African Union.  Mahamat called for dialogue to de-escalate the tension between the two countries where Kenya has contributed troops to the African Union Mission in Somalia (AMISOM) and hosts a large population of Somali refugees.

According to the USAID, some of the world’s poorest nations are in East Africa.  Here, economic growth is constrained by poor governance, unreliable power, poor infrastructure, low agricultural productivity and lack of market competitiveness.

All these challenges present an opportunity for governments in the region to work together to improve their economic wellbeing.

Economic stability in the region would mean prosperity through the reduction of migration and decreased violent extremism. The region has already established itself in coffee, cotton, textiles, apparel, staple foods and horticulture trade which are common among the countries here.  This means that collaboration and working together will enable the region to reap benefits of a unified market rather than working individually.