China has pushed for the earlier start of the construction of the headquarters of the Africa Centre for Disease Control and Prevention (Africa CDC).

by Kester Kenn Klomegah
in Countries
0 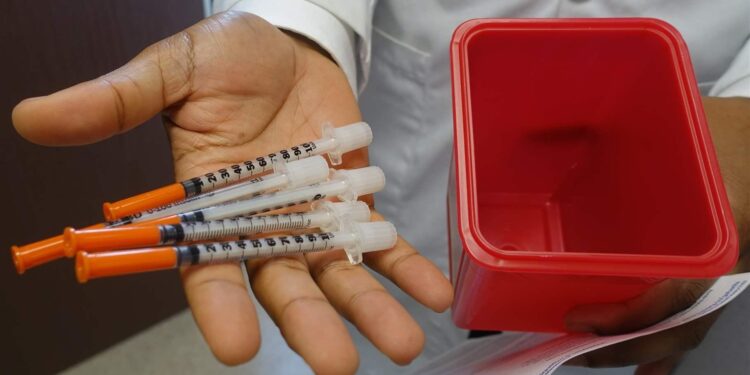 China has promised to honour some of its pledges to Africa in a health diplomatic offence. [Photo/The Pew Charitable Trusts]

China and Africa will always be a community of a shared future.

At least, its policy is strategically focused on addressing sustainable development, and China has indeed proved, over the years, in many aspects of dealing with Africa. Results are seen especially with all kinds of infrastructure that have been built these years. And, of course, the appreciable results reflect the level of commitment to the action plans arrived at triannual summits.

In its white paper says that China’s approach involves basic principles including upholding a people-oriented approach in pursuing practical cooperation with efficiency. In its cooperation with Africa, it gives priority to the interests and wellbeing of the peoples of Africa and works to their benefit.

China is committed to fully honouring the promises it has made to its African friends. Developing solidarity and cooperation with African countries has been the cornerstone of China’s foreign policy. In the fight for coronavirus, China will deliver one billion vaccines to Africa – with a population of 1.3 billion. This indicates further its efforts at promoting cooperation in basic healthcare delivery.

With the outbreak of coronavirus in December 2019, China was the first country in the world to convene an anti-pandemic summit with Africa. It has further called on international partners to increase support to Africa, while itself providing at various times medicament including vaccines to many African countries.

Quite recently during the last summit held in November, China’s President Xi Jinping elaborated on important policies on advancing China-Africa cooperation and strengthening cooperation amid the pandemic. In order to support, he promised one billion doses. It has made deliveries in many African countries.

China actively honours its commitment to making vaccines a global public good. At the time when Chinese vaccines had just reached the market and domestic supply was tight, China began to supply vaccines to Africa in support of its battle against the pandemic.

By November 2021, China had provided over 1.7 billion doses of Covid-19 vaccine to more than 110 countries and organizations, including 50 African countries and the AU Commission, and is striving to provide an aggregate total of two billion doses by the end of 2021. In addition, it donated US$100 million to COVAX, which aims at ensuring all countries have access to a safe, effective vaccine.

COVAX is a global programme coordinated by the World Health Organization in partnership with GAVI – the Vaccine Alliance, the Center for Epidemics Preparedness Innovations and many others. Producing countries are free to donate vaccines through COVAX.

After the Covid-19 struck, in coordination with local governments, enterprises and social organizations, China has provided emergency anti-pandemic supplies – including 120 batches of nucleic test reagents, protective gears, masks, eye protectors and ventilators – to 53 African countries and the AU based on their respective needs, with these emergency supplies reaching almost all areas across the continent.

It has, in addition, sent medical teams to a number of countries on the continent.

At the 2018 Beijing Summit and the 7th Ministerial Conference of the Forum on China – Africa Cooperation (FOCAC) held in Beijing, the Government of China expressed its commitment to support the building of the Africa CDC HQ.

African leaders welcomed this with appreciation and committed to supporting the realization of the project.

Located in an African Village, south of Addis Ababa, the new site covers an area of 90,000m2 with a total construction area of nearly 40,000m2. When completed the building will include an emergency operation centre, a data centre, a laboratory, a resource centre, briefing rooms, a training centre, a conference centre, offices, and expatriate apartments, all to be constructed, furnished and equipped by the Government of China.

In accordance with a number of agreements concluded between the AU and the Government of China, the AU Commission and the Ministry of Commerce of the People’s Republic of China signed the Implementation Agreement on the Africa CDC HQ’s building project in July 2020.

Read: CDC Group to invest over US$4 billion to combat climate emergency in Africa, Asia

The headquarters building is expected to become one of the best-equipped centres for disease control in Africa, allowing the Africa CDC to play its role as the technical institution coordinating disease prevention, surveillance and control in the continent, in partnership with the national public health institutes and ministries of health of Member States.

Speaking at the ceremony, Commissioner Elfadil said the completion of the first phase marks 45 per cent of the total construction. “While celebrating our success in reaching 45% of total project completion within an impressive record of 348 days. The African Union would like to express its sincere appreciation to the Government of the People Republic of China for funding of the whole project, and to all the stakeholders who have played their respective roles and tirelessly assisted the team in achieving its target,” she said.

In his remarks, Ambassador Liu Yuxi underlined the close China-Africa partnership. “As we speak, the Covid-19 pandemic is still wreaking havoc across the globe. However, it cannot prevent China-Africa cooperation from growing in depth and substance. China and Africa stand together with mutual assistance, team up amid difficulties and treat each other wholeheartedly.”

He added that the Africa CDC building itself is a manifestation of beneficial and practical work for the African people. China will proceed to try its utmost to assist African countries in responding to the pandemic and restoring economic and social development. By combating Covid-19, China and Africa have withstood severe challenges, helping each other and fighting side by side to defeat the pandemic through solidarity and cooperation.

It is also a splendid testimony of China unflinching support for Africa. “Together, we have written a splendid chapter of mutual assistance amidst complex changes, and set a shining example for building a new type of international relations,” Xi said later in one of his speeches, and emphasizing the principles of China’s Africa policy as pursuing the greater good and shared interests.

China and Africa jointly launched an Initiative on Partnership for Africa’s Development this year.

It emphasizes that all countries should carry out cooperation with Africa on the premise of respecting Africa’s sovereignty and listening to Africa’s voice, give full play to their respective advantages and pool efforts in an effective way, and do more beneficial and practical work for the well-being of the African people.

China and Africa are working closely.

At the initiative of both China and African countries, FOCAC was inaugurated at its first Ministerial Conference in Beijing in October 2000, with the goals of responding to the challenges emerging from economic globalization and seeking common development. FOCAC now has 55 members, comprising China, the 53 African countries that have diplomatic relations with China, and the AU Commission.

Beyond the borders of Africa, China expresses and appeals for upscaling the development and improving the basic needs of the underprivileged peoples in Africa. While attending the General Debate of the 76th Session of The United Nations General Assembly, Chinese President Xi Jinping proposed the Global Development Initiative, calling on the international community to accelerate the implementation of the UN 2030 Agenda for Sustainable Development.