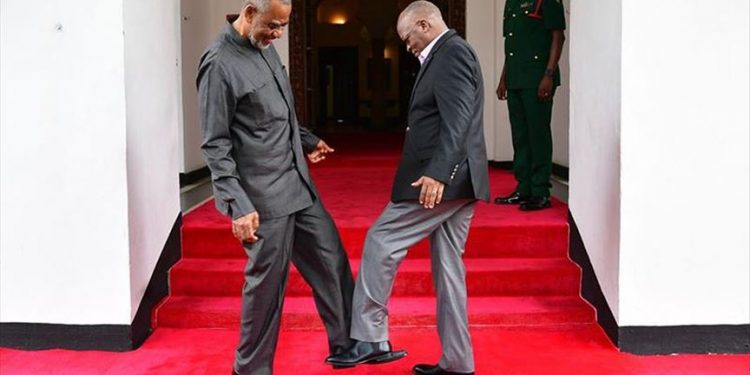 Tanzania President John Magufuli addressed the nation of more than 55 million, to stay strong and be resilience through the coronavirus (COVID-19) outbreak.

The novel coronavirus (COVID-19) is in East Africa, and has now penetrated Tanzania whereby until yesterday 12 (4 foreign national and 8 Tanzanian citizens) cases were reported.

Hence—unequivocally the Tanzanian government stated that almost 20 samples tested were negative, including the first patient.

According to the World Health Organization, the pandemic which has spread in more than 170 countries, taken more than 14,000 lives, and infected over 300,000 people.

Hence, this pandemic brought Tanzania President John Magufuli before the public, and addressed the nation of more than 55 million, to stay strong and be resilience through the outbreak.

The outbreak has also taken a toll on Tanzania’s economic landscape, hurting trade operations particularly between Tanzania and China of which their bilateral trade volumes stand at almost $3 billion.

Air Tanzania Company Limited has also seen a revenue loss of about 2 to 3 per cent, and just last week, the Dar es Salaam bourse lost over $868 million due to COVID-19.

Despite the outbreak forcefully compelled a change in lifestyle, and business interactions in Tanzania, the East African nation is still standing tall against the pandemic.

“The government will not yield to COVID-19” President Magufuli spoke during a Sunday Mass in the nation’s capital Dodoma.

Further, he stressed on the national containment landscape, saying “I’m directing the relevant authorities to ensure that nobody is allowed to enter the country without being screened for symptoms of the disease.”

Despite other East African nations—Rwanda, Uganda and Kenya closing their borders, Tanzanian borders are still open and but the Tanzanian government has assured a close monitor of all borders, and all arrivals will be subjected to a mandatory self-isolation process (at their own costs) for 14 days.

The government of Tanzania via the ministry of health are monitoring the situation national wide, with regional authorities’ alert and the public getting regular precautionary messages on all media channels.

In that context, the government has shut down all schools, colleges and universities, suspended all national events, conference, and games.

Also, the government went ahead to ensure hygienic practices are followed within corporations and public transport services. In addition, the national carrier has suspended the majority of its routes.

The President also urged all Tanzanians including government officials to postpone travel outside the country, and especially to nations devastated by the pandemic.

“I’m directing the relevant authorities to ensure that nobody is allowed to enter the country without being screened for symptoms of the disease,” President added.

Further, other measures taken by the government includes improving the capacity of the national laboratory by providing it with modern screening equipment.

Also, the President directed the supply of screening equipment and protective gear to public workers who are stationed at the country’s border posts.

He also directed that only the prime minister and the Health minister are responsible for releasing updates on the Covid-19 to the public.

The COVID-19 has already taken a toll in Tanzania’s business community, whereby businessmen and women confessed to the massive shrinkage of activities, delay in accessing various incentives to boost operations, the president urged citizens to be strong and keep on building the nation.

“Let us continue working to build our nation; we will not retreat from the coronavirus – and we depend on God to develop our economy,” he said.

The COVID1-9 pinch on MICE

Tanzania garners billions out of conventional tourism as well as meetings, incentives, conference and events (MICE), sadly this sphere our tourism industry has sustained a visible hurt due to the coronavirus impact ripple effect.

The Tanzanian Tourism Board (TTB) eyed over 2 million visitors in 2020 as part of their goals to diversify the industry, hence, according to information from The Citizen, about 95 per cent of the hotels in Zanzibar has temporarily been closed, with some on the Mainland the following suit.

On average Tanzania attracts over 1.3 million visitors per year.

“There are hotels which have already closed operations, having forecast that there’ll be no visitors in the near future, “Hotels Association of Tanzania chief executive officer told The Citizen.

The outbreak has forced the state-run convention centres to get ready in losing over $ 434,000 if the virus impacts prevail.

According to convention centres officials, the Arusha International Conference Centre (AICC) and the Julius Nyerere International Convention Centre (JNICC) were to earn over a total of $430,000. Sadly, the pandemic has forced various meetings and events to be postponed or cancelled.

Regardless of the current economic threats posed by the pandemic and even pushing countries to recession such as the United States and some European nations, Tanzania is still confident in containing the virus and emerging strong.

Also, Kenya (a fierce tourism competitor to Tanzania) did set aside over $ 4 million to help the tourism sector to recover from the effects of the coronavirus outbreak, including restoring destination confidence to ensure that Kenya remains preferred travel destination, nothing is yet revealed on Tanzania, which earned over $ 2 billion in 2019.

Coronavirus cases in Kenya jump to 25

The economics of harvesting rain