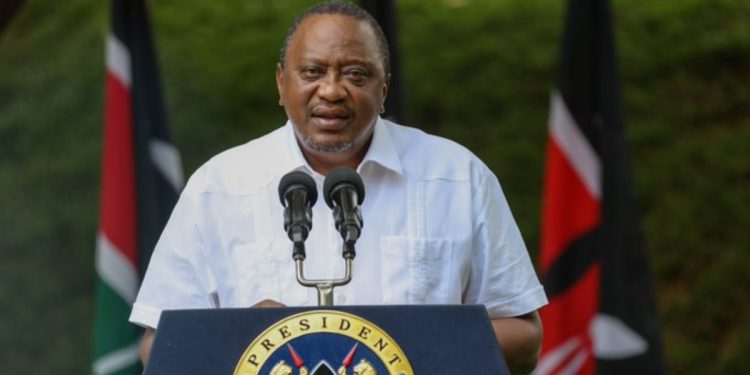 Kenya’s President Uhuru Kenyatta has called on different armed groups in DR Congo to lay down their weapons and work with President Félix Tshisekedi in nurturing peace and stability in the East African Community’s youngest member state.

President Kenyatta emphasised that without working towards unity and cohesion among all the people of DR Congo, every separate section will remain a loser.

“…without laying down weapons and forging an unbreakable national compact to secure the DRC, the fruits of prosperity, that you all deserve from the teeming rich endowments, will remain elusive.

“This makes it urgent for all people of goodwill in the DRC to coalesce together and frantically set a foundation of prosperity by working tirelessly for an enduring peace,” the President told the people of DR Congo.

President Kenyatta’s message was conveyed in a recorded video statement delivered on Wednesday evening during a virtual Inter-Congolese Peace Dialogue convened by Kenya.

The Head of State pointed out that the value of peace is unique and uncontested, adding that nothing enduring can be built on the shifty soils of insecurity.

“The historical call to be our brothers’ keepers is a bell that has been tolling and to which Kenya always keeps responding. We will not relent in your pursuit of peace for prosperity. This is why we reached out to you, our brothers, our sisters of the DRC,” President Kenyatta said.

He likened Kenya’s facilitation of the peace dialogue to the traditional drummer calling elders to the village square to talk through pressing matters that threaten to breach the tranquillity of a peaceful people.

President Kenyatta thanked President Tshisekedi and the armed groups in DR Congo for heeding Kenya’s solidarity call on the peace dialogue and encouraged them to speak and harness all their efforts towards moving DR Congo forward.

At the same time, President Kenyatta assured DR Congo that Kenya is ready to extend optimal support to their common goal as they forge ahead to create a favourable environment to secure prosperity for the people.

“The DRC deserves to claim and assert its rightful place in Africa and the world at large. This is just but the first step towards that attainable goal. I thank you, each and every one of you, for heeding our call and seizing this opportunity,” President Kenyatta said.

Pointing out that by its nature peace is fragile and needs unceasing nurturing, the President said the state of peace in Kenya and the rest of the East African Community has been nurtured by perpetual, robust collaborative efforts.

He cited the example of building Kenya as a state where the people, in all their broad diversity, made considerable personal and communal sacrifices to keep the flame of peace burning.

“Just to give two examples, our promulgation of the 2010 new Constitution as well as my 2018 Handshake with my rival in the last election, all called for steep sacrifices from our leaders and also from our people,” President Kenyatta said.

The President added that it was against such gruelling background that Kenya has built a steadfast commitment to investing in peace and security initiatives in our entire sub-region.

President Tshisekedi commended the armed groups for agreeing to dialogue with his Government, saying their positive response is an act of honour to their country.

He expressed his readiness to listen to and guarantee the security of all armed groups, pointing out that DR Congo will only develop if it has a national military and police force that is keen on defending the interests of all citizens.

“I understand the different reasons that drew you to take up arms. However, to develop our country, we need to build and sustain national defence forces and police that are keen to defend the daughters and sons of DRC,” President Tshisekedi said.

He called on all armed groups to accept the process of disarmament, demobilisation, reintegration and reinsertion to help in the reconstruction of the nation for the benefit of all Congolese citizens.

“This is a process that will take into account all concerns. We are going to obtain the technical and other support from many donors to enable us to succeed,” President Tshisekedi added.

Representatives of over 30 armed groups participated in the talks with the majority accepting the request of the two Heads of State to lay down arms while a few requested to be given more time to appraise themselves with the set conditions but expressed willingness to join hands in building their country.

Read: How admission of DRC to EAC will benefit the regional bloc