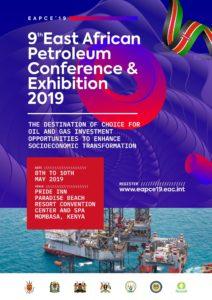 The conference is held biennially

by Salum Mohamed
in East Africa, Energy
0
Share on FacebookShare on LinkedIn

This year`s conference is themed:` East African Region – the destination of choice for Oil and Gas Investment Opportunities to enhance Socioeconomic Transformation.`

Chairperson of the organizing committee, Marin Heya said over the weekend that over 1,000 local, regional and international delegates will be attending the three-day conference that will be in Mombasa from May 8.

`The conference will help attract investors on oil and gas into the region given the potential in the region, ` Heya said.

He revealed that the Chinese geo-spatial and survey firm BGP and CNOOC are among the companies that are expected to attend the three-day conference.

The official also stated that the East African Community (EAC) member states, including Kenya, Uganda, Tanzania and Rwanda will exhibit at the conference alongside international oil companies. `We are also going to discuss a common legal and policy framework for countries in the region, ` he added.

Heya further noted that the conference is coming at a time when Kenya and Uganda have started drilling oil while Tanzania is exploring gas. In Kenya, oil was first discovered in 2012 by a British firm known as Tullow Oil while in Uganda, oil was discovered in 2006 with proven crude oil reserves of 6.5 billion barrels, about 2.2 billion of which is recoverable. In 2016, Tanzania had estimated natural gas reserves of 57 trillion cubic feet, with first natural gas discovery made in 1974 on the Songo Songo Island in Lindi Region followed by a second discovery at the Mnazi Bay, Mtwara Region in 1982.

He revealed that Kenya is keen at marketing its oil blocks with the aim of attracting investors into the industry. Also, the Kenyan official  said that the conference is in line with the EAC Vision 2050 on the energy sector development that is aimed at ensuring sustainable, adequate, affordable, competitive, secure and reliable supply of energy to meet the regional needs at lower cost.

`By 2050, the region targets to transform the energy landscape to have efficient distribution of petroleum product with sufficient reserves, ` Heya said.

The biennial conference has been going on since 2003 when the first conference was held in Kenya. It offers a wide range of technical presentations reflecting developments in the oils and gas industry in East Africa and around the world. It aims to provide a forum for discussing the legal and policy framework and the overall business environment prevailing in the region.

The conference also gives stakeholders in the oil and gas sector an opportunity to interact with EAC senior government officials and decision makers.

How investors will benefit from Equity, Tellimer research insights on the region