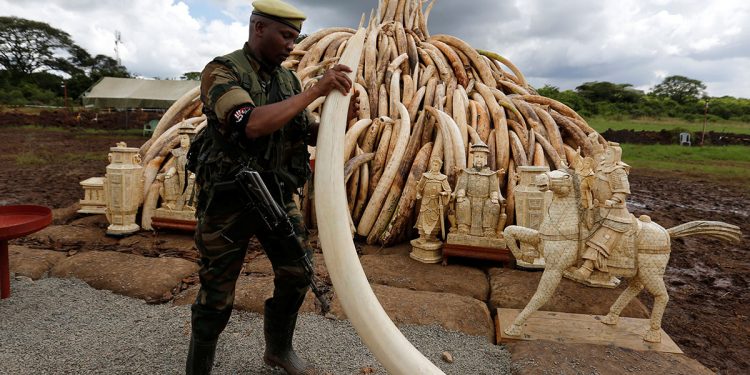 Ivory set for destruction in Kenya. Trophy hunting is allowed in Botswana risking elephants in Kenya if Botswana’s plans to have Kenya support its trophy hunting works in its favour. [Photo/Al Jazeera]

Elephants in Kenya could be facing an enhanced threat if Botswana’s plans to have Kenya support its trophy hunting works in its favour.

The two countries have signed three key agreements covering bilateral trade, air transport and ICT but there could be more than meets the eye.

In opening a new chapter of cooperation between the two countries, Kenya and Botswana agreed to broaden areas of cooperation by solidifying historic ties, emphasizing the need to engage as African countries before venturing into the world.

The agreements were signed at the end of talks held between Presidents Uhuru Kenyatta and Mokgweetsi Masisi at State House, Nairobi in a meeting also attended by Deputy President William Ruto.

Botswana and Kenya have differed severally over the hunting of wildlife-especially the endangered elephants.

Masisi’s visit to Kenya has an agenda to have the East African nation reconsider its stance on “the utilisation of natural resources”.

Botswana’s Environment Minister Kitso Mokaila who is accompanying Masisi has faulted Kenya’s proposal to have elephants moved from Appendix 2 to Appendix 1 classifying them as endangered.

“Kenya and other countries have proposed to the Convention on International Trade in Endangered Species of Wild Fauna and Flora (CITES) that Botswana elephants and those of neighbouring states namely; Namibia, South Africa and Zimbabwe be uplifted from Appendix 2 to Appendix 1.”

Mokaila said that Botswana has objected the proposition since it was formulated “without her input nor consent”.

Moving the elephants to Appendix 1 will automatically bar the trade in ivory.

At the same time, Botswana’s Foreign Affairs Minister Dr Unity Dow said her country would use the state visit to persuade Kenya into considering having Kenya Airways fly into Botswana.

She added that the two African states produced the most sought-after livestock vaccines calling for more collaboration in the area to exploit ways to solve challenges facing their animals.

What Kenya wants from Botswana

President Kenyatta said his administration is keen to broaden the two countries’ areas of cooperation. This is to include the minerals and mining sector, livestock breeding, trade, tourism promotion, agribusiness and manufacturing.

Kenyatta urged for trade and investments through private-public partnerships and joint ventures between business communities of the two countries. This, he said, was as a way of strengthening both government-to-government and people-to-people interactions.

With the recent launch of the operational phase of AfCFTA in Niamey, Niger, Kenyatta noted that it was a step in the right direction towards continental trade integration and the free movement of people, goods and services.

“I look forward to fully operationalize the AfCFTA and accelerate the ongoing reforms of the African Union to make it more responsive to the challenges confronting the continent,” the Kenyatta told his visiting Botswana counterpart.

Masisi assured that Botswana will support Kenya’s bid for the non-permanent seat in the UN Security Council for the period 2021 to 2022.

“Kenya asked that we support its candidature for the opportunity to be voted into the security council of the United Nations on a non-permanent basis, and we assure that Botswana will vote for Kenya even before Kenya votes for itself,” Masisi said.

“We in Botswana remain committed to our Pan-Africanist outlook. And so, it should be perceived as automatic that given our shared values over a long period of time, there is no way that we will not share those values when it comes to issues that besiege us such as challenges that we both face and the opportunities that present themselves,” he added.

President Masisi commended Kenya for its leading role in promoting regional security and stability, particularly in the fight against terrorism and violent extremism.

Of the three agreements signed, one was on the avoidance of double taxation which was signed by Kenya’s Foreign Affairs Cabinet Secretary Monica Juma and Botswana’s Dow.

The others are a Bilateral Air Service Agreement (BASA) and Memorandum of Understanding for cooperation in Information, Communication and Technology (ICT).

The two delegations also discussed cooperation in the livestock sector especially in disease control and movement of animals as well as opportunities for cooperation in training and capacity enhancement.

In November 2016, Kenya and Botswana signed an MoU to build their trade and Investment partnerships in agriculture, agri-business, ICT, horticulture and manufacturing among others.

This was during the Kenyan-Botswana Forum in Nairobi.

According to the Kenya Revenue Authority Customs Department (KRACD), revenues from the trade dropped to KShs451 million in 2016 from KShs834 million in 2014.

Despite the 2016 MoU signing, Kenya had to reach out to Botswana again last year to push for increasing trade volumes that remained below target for both countries.