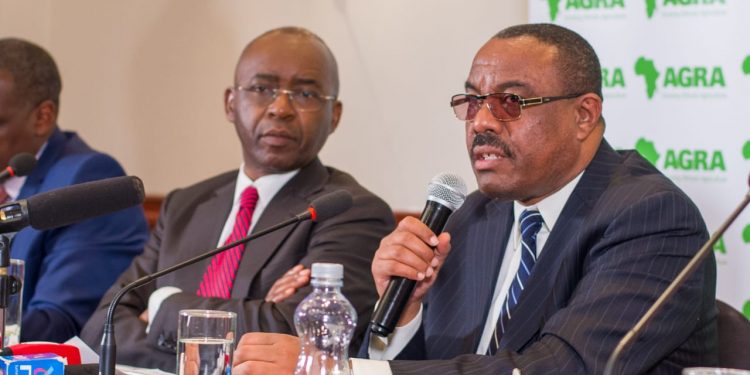 by Kimani Chege
in Agribusiness, Ethiopia
0
Share on FacebookShare on LinkedIn

The Alliance for a Green Revolution in Africa, (AGRA), an agricultural think tank and partnership-driven institution in Africa has announced a change of guard with leading entrepreneur and owner of Econet Group Strive Masiyiwa stepping aside and former Ethiopian Prime Minister Hailemariam Desalegn taking the helm.

The seat has had a high-level representation since the founding chairman Kofi Annan stepped aside. It has been instrumental in developing formidable partnerships in the continent is promoting agricultural growth and investments.

‘I am thankful that I succeed Mr. Masiyiwa, a remarkable continental leader, who leaves behind a solid organization and an impressive track record. I remain certain of his support in the journey to achieving the continent’s major agricultural prospects,” noted Hailemariam Desalegn.

“Around the world, food security ranks high up on the governments’ development agenda…the Maputo Declaration requires African countries to spend 10 percent of their national budgets in agriculture, part of this should go to investing in technology in order to realize this vision,” he said in Nairobi after he was confirmed as the new chair.

‘I am pleased to welcome our new Chairman H.E. Hailemariam, a truly African visionary, who, by deed, showed that African agriculture can be properly managed to make the continent food secure.’  Strive Masiyiwa, the outgoing board chair.

The two leaders then proceeded to Kenya’s State House where they met President Uhuru Kenyatta. Mr Masiyiwa and the former Ethiopian Prime Minister briefed the President on the change of guard at the continental institution and assured him of AGRA’s continued support to Kenya’s agricultural sector.

They also invited President Kenyatta to attend a major agriculture summit that will be held in Accra, Ghana this September.

First established in 2010, following a three-year series of African Green Revolution Conferences (AGRC) held in Oslo, Norway from 2006-2008, the AGRF has emerged as Africa’s leading “platform of agriculture platforms” that brings together a range of critical stakeholders in the African agriculture landscape to discuss and commit to programs, investments, and policies that can counter the major challenges affecting the agriculture sector on the continent.

The Forum and its momentum have grown considerably over these years, and the AGRF 2016 in Kenya under the leadership of President Kenyatta attracted more than 2,500 delegates and resulted in commitments of more than US $30 billion dollars to support the continent in investments to increase production, income, and employment for smallholder farmers and local African agriculture businesses over the next ten years.

The AGRF 2017 in Cote d’Ivoire under the leadership of President Ouattara looked at how governments, private sector, and partners were coming through on the 2016 commitments made in Nairobi. It was attended by 1,500 delegates and it had a new set of commitments and partnerships, including close to US $6.5 billion worth of deals in palm oil, pulses, potato, and rice – mainly in West Africa by the private sector.

The AGRF 2018, hosted by the President of Rwanda and 2018 Chairperson of the African Union, the H.E. Paul Kagame, in Kigali from 5 to 8 September 2018, brought together over 2,800 delegates from 79 countries with a resounding mission to transform agriculture in Africa.

A key feature was taking leadership in agriculture to a new level, both to benefit the millions of smallholders who earn their livelihood from small-scale farms, and to build the economies that make up the African continent.