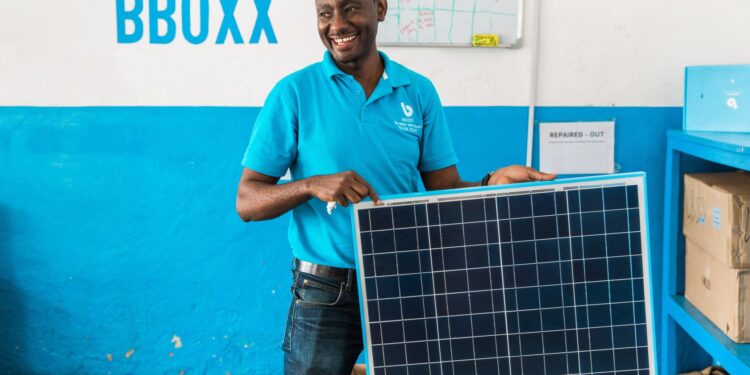 Bboxx Kenya will use the US$14 million loan to connect 470,000 Kenyan households to renewable energy sources. [Photo/Green Building Africa]

The solar energy solutions are expected to serve 470,000 people, 80 percent of whom are based in rural areas and the majority of whom currently use torches and other energy forms like kerosene as their main source of lighting

by Kanyali Muthui
in Energy, Kenya
0
Share on FacebookShare on LinkedIn

GuarantCo, a fund backed by the governments of UK, Switzerland and Australia among others, is guaranteeing Ksh1.2 billion or 75 percent of the loans.

“SBM Bank is elated to spur the growth of the energy sector in Kenya through partnerships with like-minded entities such as Bboxx and GuarantCo,” SBM Bank Kenya’s deputy chief executive officer Jotham Mutoka said.

This means that the fund will absorb up to three-quarters of potential defaults on the loans, giving the bank the confidence to disburse the credit facilities to Bboxx customers who are mostly low-income households without access to the national power grid.

As small-scale renewable energy solutions have become mainstream across African households over the past decade, one of the key drivers has been easing the financial access barrier for end users.

In the past, the sheer cost of purchasing full range solar energy units typically put them out of reach for millions across Kenya and the continent at large- especially for low-income households.

A decrease in prices of solar panels combined with scalable payment solutions provided by different companies across the country now means the solar powered systems and devices can be made affordable for purchase.

“We are delighted to partner with Bboxx and SBM Bank to make this solar home systems transaction happen to the benefit of people in Kenya.  This is our sixth deal and first off-grid solar project in Kenya,” Guarantco Chief Financial Officer Emily Busby said.

With a clear disparity in the electrification rate, Bbox Kenya is looking to use funds to purchase new inventory over the next two years including 89,600 solar home systems and essential appliances such as fridges and phones.

These are expected to serve 470,000 people, 80 per cent of whom are based in rural areas and the majority of whom currently use torches and other energy forms like kerosene as their main source of lighting.

The project is in line with the Kenya National Electrification Strategy, developed in 2018, which demonstrates the Government of Kenya’s commitment to scaling up off-grid electrification with ambitions to establish two million new connections through standalone solar home systems by 2022.

The government also plans to build 35,000 connections through 121 new mini-grids to serve housing clusters too distant from the network or too small to be connected to the national grid.
The government’s keen focus on adopting renewable energy solutions is aimed at helping the country meet its goal of reducing carbon emissions by 30 percent by 2030.

“We are proud to support the Kenyan government in its ambition to grow its off-grid capabilities and improve affordable, clean energy access to local people while involving the private sector and provide local currency infrastructure project financing which is at the core of GuarantCo’s business.” Bushby said.

The project by Bboxx is expected to create an additional 100 long-term jobs at Bboxx Kenya. The company currently employs 300 workers.

A report by the International Finance Corporation revealed that the potential benefit of local currency funds is that it allows investors to diversify their holdings away from the US dollar as well as benefit from the cumulative positive effect of emerging market nations with stronger economic growth.

“Currency exposure adds another layer of volatility. This becomes particularly important during times when investors are looking to avoid risk,” the  report stated.