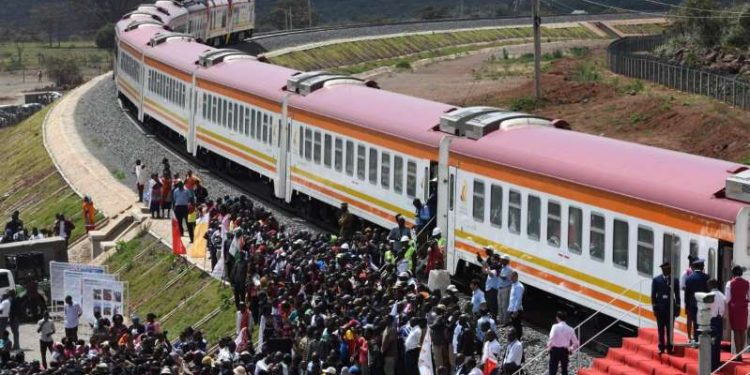 Caption: Kenya’s Standard Gauge Railway (SGR) project. Kenya owes China millions of dollars and wants to revisit the terms of payment. Kenya’s Court of Appeal has ruled the SGR contract illegal for not following public procurement rules, does this mean Kenya may not have to pay the debt? Photo: AFP

Kenya is facing the daunting task of paying China a piling amount that it owes for the Chinese funded multibillion dollar Standard Gauge Railway (SGR).

Only a short while ago, the National Treasury asked parliament to allow it some US$940 million dollars to make its latest installment to pay to China.

After millions of dollars have been dumped into the Kenyan ambitious SGR project, now Kenya wants China back on the discussion table to revisit the terms.   Sources say the amount covers interest and principal installments invested by the Chinese government and other entities including the Chinese Exim Bank and the China Development Bank.

It is no surprise that the Kenyan lawmakers want a sit-down with their Chinese counterparts to discuss the payment because the SGR is not making as much money as was projected.  The plan was for the railway to carry goods from Mombasa port into landlocked Africa. What was not planned for was other East African countries making their own plans.

Tanzania went ahead and built its own SGR to ferry goods from its own Dar es Salaam port to the same landlocked countries that Kenya was aiming for. Uganda decided it did not like the Kenyan deal and chose to use road transport for its goods.

Kenya almost got away with it, when last month, the presidents of Kenya, Uganda, Rwanda and South Sudan agreed that all goods imported through Kenya would henceforth be transported via the SGR.  Less than a fortnight later, Uganda changed its mind and said the use of SGR should be optional and not compulsory.

That is not the end of the crisis; internally, Kenya is facing backlash from truck drivers who are complaining of losing business to the SGR.

In utmost good faith, Kenya has been trying to meet the debt. In April, Kenya made initial plans to pay its Sino development partner. The Treasury Cabinet tabled before parliament a supplementary budget in which it sought approval to allocate funds for the pay off.

The budget listed payments as follows: to the Chinese Government US$1.8 million, to Chinese Exim Bank US$714 million and to the China Development Bank US$223.4 million.  How it will all play out remains to be seen. As for now, Kenya is calling China to re-discuss the terms of payment; China is yet to respond.

Getting out of the trap, how Kenya may avoid the Chinese debt

It takes reason to admit that one has entered into a shoddy deal and takes wisdom to tell the second party just that.

“There are some investment decisions we have taken that are not in the best interest of the country, so it is time we start re-evaluating them and renegotiating with people who gave us the money so that we are able to survive. We must renegotiate our debts with the Chinese otherwise we are headed for a very difficult time,” local media quoted the Chairperson for Kenya’s Parliamentary Budget and Appropriations Committee as saying.

Good intentions; let us say the Chinese do agree to come back to the table.  How does Kenya plan to wiggle out of the deal? Kenya could engage in a futile attempt to appease the Chinese telling them they entered into the financing arrangements with their eyes closed.  Now that their economy is shot Kenya is unable to keep to its side of the bargain and wants to renegotiate the terms, with every intention of paying.

Sounds like a plan.   However, this is a good time to remind Kenya of the simple rule of life: if a deal sounds too good to be true, it is.

So unfortunately for Kenya, in the business world, good intentions do not equate good results. That brings us to the root of the problem—that of signing the deal with sound mind.

In the predicament of coughing up the funds, Kenya may very well have found an answer to its problem.  Just recently, the Kenyan Court of Appeal ruled that the SGR deal with the Chinese is illegal. It said that the government, via its Kenya Railways company, did not comply with and violated the nation’s public procurement laws and so the deal signing is not recognized in the eyes of the law.

What this ruling means is that now Kenya can walk out of the contract because its Court of Appeal has ruled it an illegal pact.

However, that move may not be likely since Kenya has showed no intention of backing out; rather, it wants only to restructure the terms of payment.

What Kenyatta secured at China Belt and Road Summit