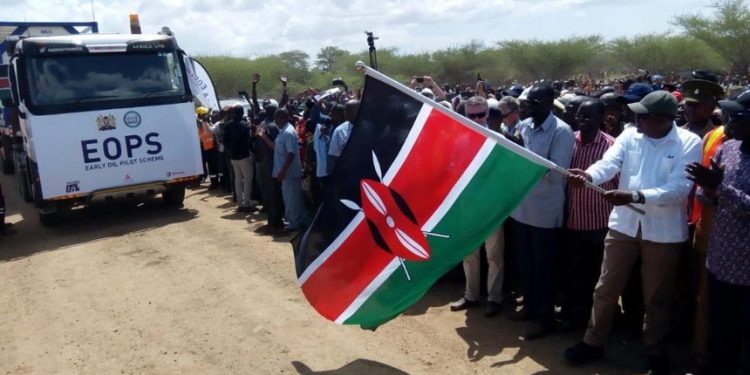 President Uhuru Kenyatta flags off the first consignment of Kenya's crude oil under the Early Oil Pilot Scheme at an event in June last year.

The government and its Joint Venture Partners: Tullow Kenya, Total and Africa Oil Corp, have signed Heads of Terms for the development of the oil fields in South Lokichar Basin-Turkana.

by Chacha Mwita
in Extractive and Energy, Kenya
0
Share on FacebookShare on LinkedIn

Kenya has made a major step in the commercialisation of its oil ahead of planned exports which will see the East African nation become a major net oil exporter in the region.

In the latest developments, the government and its Joint Venture Partners: Tullow Kenya, Total and Africa Oil Corp, have signed Heads of Terms for the development of the oil fields in the northern part of the country (South Lokichar Basin-Turkana), where exploration and production has been ongoing on small scale.

These Heads of Terms capture all of the key commercial principles related to the implementation of ‘Project Oil Kenya’ and provides both the framework and commercial certainty required to draft the fully termed upstream and midstream agreements, ahead of a Final Investment Decision(FDI).

This is a major and important milestone towards reaching a FDI.

Under the deal, all parties have agreed that the Amosing, Ngamia and Twiga fields should be developed as the foundation stage of the development with 60,000-80,000 bopd (barrels of oil per day) Central Processing Facility.

This will cover the discoveries of fields in Block 10 BB and 13 T in the South –Lokichar Basin.

According to Tullow, the Amosing and Ngamia fields have estimated contingent resources of about 560 million barrels, with plateau production potentially reaching 100,000 barrels per day.

Also factored in the agreement  is the development of an export pipeline linking the oil fields to Lamu, where the government is constructing a 32-berths port, the country’s second major sea port after the Port of Mombasa.

This is under the Ksh2.5 trillion (US$24.5 billion)Lamu Port-South Sudan-Ethiopia Transport (LAPSSET) Corridor Programme, Eastern Africa’s largest and most ambitious infrastructure project.

The 892-kilometre crude oil pipeline is estimated to cost US$1.1 billion (Ksh111.6 billion), with a further US$2.9 billion (Ksh 294.1 billion) needed for upstream operations.

Last year, Tullow hired Wood Group (Plc) to design the pipeline needed to pump crude from the Lokichar fields to Lamu, with commercial production and exports anticipated for 2021/2022.

READ:Pipeline deal inked as first Kenyan oil heads off to the market

Now that the Heads of terms have been signed, the Joint Venture Partners will focus their efforts on securing financing for the pipeline while continuing to progress the ongoing Front-End Engineering & Design (FEED) and Environmental & Social Impact Assessment (ESIA) work, which will lead to the selection of contactors ready for Final Investment Decision (FDI).

The Heads of Terms Agreement was signed at the Ministry of Petroleum and Mining, in Nairobi, on Monday by Mining and Petroleum Cabinet Secretary John Munyes, Tullow Kenya Managing Director Martin Mbogo together with signatories from the JVP.

Commenting on the new development, Mark Macfarlane,Executive Vice President Tullow Plc,said: “The signing of the Heads of Terms is a major milestone in the commercialisation  of Kenya’s first oil development. Project Oil Kenya is expected to be the largest ever private sector investment in Kenya and these Heads of Terms underpin the long-term and mutually beneficial partnership between Tullow, our Joint Venture Partners, and the government of Kenya and is a major step towards delivering FID for the project.”

Tullow is a leading independent oil and gas, exploration, and production group, quoted on the London, Irish and Ghanaian stock exchanges.

The group has interests in over 85 exploration and production licences across 16 countries which are managed as three business delivery teams:West Africa,East Africa and New Ventures.

The government has welcomed the latest development in the country’s oil sector, as it looks forward to joining the league of global oil exporters in the near future.

The Heads of Terms Agreements (HoTs) provide a framework and commercial certainty required to move ahead with negotiating the fully implementing upstream and midstream projects.

“This phased approach brings significant benefits as it enables an early FID, takes advantage of the current low-cost environment for both the field and infrastructure development and provides the best opportunity to deliver First Oil in a timeline that meets the government of Kenya expectations,” Cabinet Secretary Munyes said.

The government has since committed to the project which now draws out the resources that will be developed within the agreement, the obligations of each parties and the physical incentives such as the development of the Crude Oil Pipeline from Lokichar to Lamu and more.

“Mineral and Petroleum resources have the potential of becoming one of the country’s biggest foreign exchange earners and the engine that drives our country’s infrastructure growth. As you are well aware, oil and gas development is part of the enablers for the Big 4 agenda for this country. It is therefore our commitment to ensure that the government together with its partners reaches first oil,” Munyes said.

“GoK (Government of Kenya) will also continue with further exploration in our Lamu, Anza, Mandera, and Tertiary Rift sedimentary basins, so as to ensure maximum development of our oil and gas resources,” the CS added.

In March this year, President Uhuru Kenyatta signed into law a Bill outlining how oil revenues will be shared between the national government, counties and local the communities.

Under the new Petroleum Act, county government from where oil is produced will enjoy 20 per cent of revenue from petroleum operations, while five per cent will go to local communities living around the oil fields.

The national government will retain a bigger chunk which is 75 per cent of the revenue.

The country is also in the process of creating a sovereign wealth fund which will handle revenues from oil, gas, mineral and other natural resources.

“We are a country blessed with natural resources, which, if properly managed, will transform in a big way our nation and the welfare of our people,” President Kenyatta said during a recent State of the Nation address.

It is expected the country’s crude oil “First Oil” will hit the global markets before the end of this year, with the first batch intended to test the international markets before major exports commence.