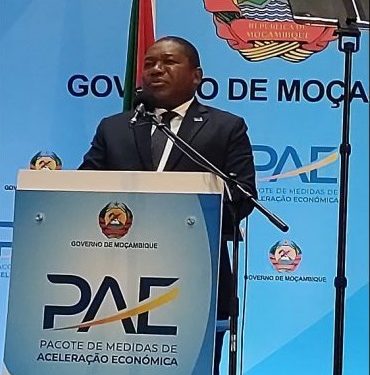 The 20 measures are part of the PAE – Economic Acceleration Stimulus Package, which aims to respond to the country’s growth needs, the negative impact of the Russia-Ukraine war, armed violence in Cabo Delgado province and natural disasters.

The global pandemic had taken a heavy toll on Mozambique’s economy. In 2020, the country experienced its first economic contraction in nearly three decades. COVID-19 hit the economy as it was attempting to recover from the slowdown triggered by the hidden debt crisis and the tropical cyclones in 2019.

Other factors include terrorist violence in Cabo Delgado, which, to this day, has caused the displacement of over 850,000 people in the country. As well as cyclones and the conflict in Ukraine. All factors combined resulted in the abrupt deceleration of economic growth while adding an immeasurable amount of pressure on the ever-complex challenges which already burden Mozambique’s financial management.

The PAE – Economic Acceleration Stimulus Package consists of 22 measures divided into two sets of reforms, the first being fiscal and economic stimulus and the second the improvement of its business environment, transparency, governance, and the acceleration of strategic infrastructure.

The fiscal and economic stimulus interventions include the reduction of selected taxes with a direct impact on the main productive sectors.

The Mozambican head of state also signalled the introduction of tax incentives for new investments over the next three years but did not mention the rates of these incentives.

The PAE package increased the share of revenues from natural resources transferred to the provinces where they are extracted from 2.5 per cent to 10 per cent.

The package also foresees the establishment of a mutual loan guarantee fund worth US$250 million to help banks make credit available in the economy at more affordable interest rates.

As for the improvement of the business environment, transparency and governance, the measures include stronger pension funds regulation; Structural improvement in the efficiency of public services; Improving internal audits, and; the adjustment of labour laws and visa regime.

President Nyusi also announced a general review of entry visas to the country, with the exemption for citizens of countries with low immigration risk, and the granting of investment visas of longer duration to foreign citizens who invest in Mozambique.

In an article by the Club of Mozambique dated August 10, 2022, Mozambique’s former finance ministers Tomaz Salomão and Luísa Diogo said that the economic stimulus measures announced by President Filipe Nyusi would bring about “changes and transformations” in the economy.

In turn, Luísa Diogo, who served both as finance minister and prime minister showed confidence in the scope of the measures announced by the head of state, while recommending a matrix for monitoring decisions.

“I am very hopeful that this will work. Now, they will have to roll up their sleeves, because there is no doubt that there must be a matrix with very clear dates, very clear responsibilities, and a good foreman who can manage” the execution of the stimulus package, Diogo said.

In a related article, the International Monetary Fund (IMF) said that the 20 measures to stimulate the economy will help economic growth.

“Obviously we need to analyze the details, but, in general, these measures tend to help economic growth,” IMF representative in Mozambique, Alexis Meyer-Cirkel, told the media moments after Filipe Nyusi’s address to the nation in Maputo.

Alexis Meyer-Cirkel also highlighted the “continuous growth of the Mozambican economy”, despite the adverse context resulting from the current situation marked by global inflation as a result of the impact of the Russia-Ukraine conflict.

“The global situation has been happening, and the Mozambican economy is showing continued growth. In the first quarter, it stood at 4.1%, and at 4.6% in the second. It is a recovery trend, and these measures will help,” the IMF representative stressed.

Meanwhile, according to an article by Further Africa published July 16, 2022, the Board of Directors of the World Bank approved a grant of US$300 million to Mozambique intended to support Mozambican Institutions and the “Economic Transformation Development Policy Financing (DPF) operation”.

According to a World Bank release, “This is the first in a series of three programmatic operations and supports a robust set of reforms aimed at strengthening institutions and laying the foundations for a sustained growth and economic transformation”.

She added, “This operation couldn’t come at a better moment as Mozambique’s economy is still reeling from the compounded effects of COVID-19, the protracted slowdown triggered by the hidden debt crisis, and the devastation caused by the tropical cyclones of 2019.”

This pillar of the DPR “includes a review of the 1993 Investment Law and the 2005 Commercial Code, which could result in further simplification and digitalization of procedures, expected to accelerate approval processes.