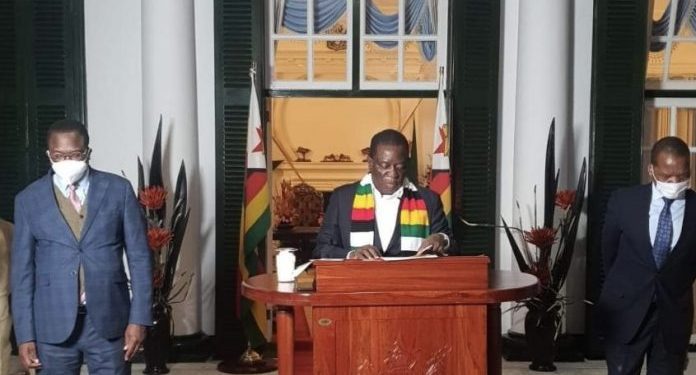 Flanked by Finance Minister Professor Mthuli Ncube and Reserve Bank of Zimbabwe governor John Mangudya, President Emmerson Mnangagwa, yesterday announced a raft of measures that he said are necessary to stabilize the economy.

He acknowledged the increase in month-on-month inflation from a monthly average of 4.5% to 15.5% in April 2022. He added that such an increase in domestic inflation was caused by both recent global shocks and domestic factors. In the televised speech, he listed domestic factors which include the pass-through effects of the recent exchange rate depreciation on the parallel market.

“If not contained, the continued depreciation of the domestic currency against the US dollar may lead to a reversal of economic stability gains achieved since the introduction of the foreign exchange auction system in July 2020,” he said.

President Mnangagwa said his Government is convinced that the recent exchange rate movements were driven by negative sentiments by economic agents as opposed to economic fundamentals.

The Government listed measures that are expected to restore macroeconomic stability, support the current robust economic recovery trajectory, boost economic confidence, increase the appeal of the local currency, preserve value for depositors and investors and deal with market indiscipline.

The President acknowledged value erosion on bank deposits of the banking public. This was created by the currency changeover of 2019. The Government resolved to compensate individuals who had funds in their bank accounts of US$ 1000 and below as of January 31, 2019. He said the process had started and will continue but didn’t disclose that they are being given how much. He further stressed that a framework is being created to compensate individuals who had figures of up to US$100 000.

“The amount required and implementation modalities of this policy will be announced in due course guided by the Public Debt Management Act and Reserve Bank of Zimbabwe,” he hinted.

President Mnangagwa said the current partial dollarization system will continue as the Government’s preferred system of payment and transaction under the domestic economy. He added that revenue collection and spending in a foreign currency will continue to support Government programmes and projects like the importation of Covid-19 vaccines. He said that the dual currency system will continue but under a carefully managed de-dollarisation process that is aligned to economic fundamentals.

“With immediate effect, the amount that can be traded under this arrangement has been increased to a maximum of US$5000 per day with a limit of US$10 000 per week per individual,” he said.

Previously the limit was US$10000 per day per individual.

Since the willing-buyer-willing-seller interbank foreign currency setup assisted in the price discovery mechanisms of the exchange rate. President Mnangagwa said retailers and wholesalers are now allowed to benchmark their pricing to the average interbank rate with a maximum allowable variance of 10%.

“This would ensure increased discipline and a level playing field in the pricing of goods and services in the market under a dual currency system,” he said.

The government has announced measures to strengthen demand for local currency by allowing duty, royalties, and tax payments in local currency. The President presented more measures and incentives to further boost the face of the local currency.

In his speech, President Mnangagwa said the monetary policy has yielded a continuous decline in reserve money growth to 5 per cent per quarter from above 10 per cent in 2020. Since reserve money supply has been constant at $28 billion for the past six months ending April 30, 2022.

“Therefore, with immediate effect, the quarterly reserve money growth will be further reduced to zero per cent per quarter,” he said.

The proportion of taxes payable in local currency

President Mnangagwa said his Government is committing exporters to pay taxes using local currency but said this was under review.

Further, he said Government is putting in place a differential taxation system for the Intermediate Money Transfer Tax (IMTT) immediately. He said exemptions from the IMTT will remain on Foreign payments done through a willing-buyer-willing-seller foreign exchange auction system.

Cash withdrawal levy for amounts above US$1000 will be reviewed downwards immediately. The levy will be reduced to 2 per cent from the current 5 per cent. This will be done to discourage the withdrawal of foreign currency which was undermining IMTT collections.

“The settlement of the local currency component of the foreign currency tax obligations for duty, royalties, and other tax heads will, with immediate effect, be at the interbank rate established through the willing-buyer-willing seller exchange rate system,” he said.

He added that the liquidation of the surrender portion of export proceeds will be settled using the same system as above. All this will be implemented with immediate effect.

President Mnangagwa said third-party payments are prone to illicit financial flows that prejudice the country of its hard-earned foreign currency resources. In this regard, banks are now prohibited to process third-party country foreign payments.

Suspension of lending by banks

“To minimize the creation of broad money that is prone to abuse for purposes of manipulating the exchange rate for financial gains and to allow current investigations, lending by banks to both the Government and the private sector is hereby suspended with immediate effect until further notice,” he pointed out.

In his speech, President Mnangagwa said regulatory weaknesses in the custodial system and sub-systems were fueling parallel market activities then he banned third-party transactions in the trading of securities. He further increased capital gains tax for short-term investments on the local bourse.

“Accordingly, to promote long-term investments on the stock market, Government has, with immediate effect, reviewed capital gains tax for shares held for a period not exceeding 270 days to 40 per cent in line with the individual maximum marginal tax rate for Pay-as-You-Earn (PAYE),” he said.

Finally, to enhance market discipline the President said security agents of Government and the Financial Intelligence Unit shall enhance their duties and responsibilities and effectively monitor financial transactions. Civil penalties shall be reviewed as well. He further highlighted that some financial crimes will be reviewed and eventually attract an automatic jail sentence.

He concluded the speech by stressing the benefits of these measures and said the Government will review the measures but when?

Read: Zimbabwe: Was it better off with Mugabe than it is with Mnangagwa?