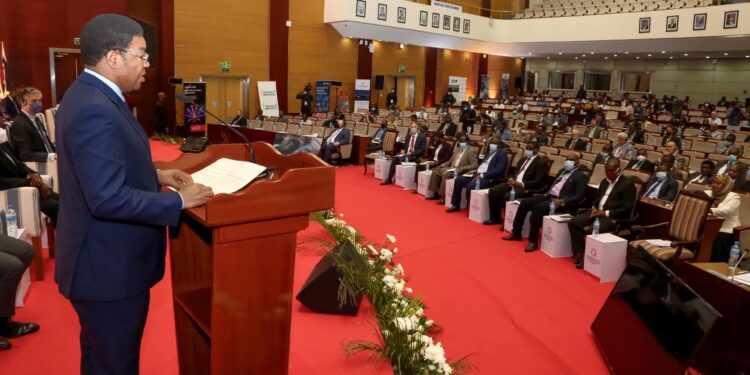 By comparison, rates are at the lowest point for the entire year compared to 16.61 per cent in the corresponding period in 2020.

by Giza Mdoe
in Economic Growth, Tanzania
0
Share on FacebookShare on LinkedIn

According to the Bank of Tanzania (BoT) monthly economic review, the overall lending rates have declined from 16.65 per cent in November to 16.40 per cent in December and may fall further as the prevailing monetary policies look to stir the economy.

By comparison, rates are at the lowest point for the entire year compared to 16.61 per cent in the corresponding period in 2020.

The country’s monetary policies are designed to stimulate the economy to cushion industries from the economic devastation of Covid-19. By lowering borrowing rates, the country is effectively allowing businesses to stay afloat by obtaining operating loans at lower rates.

The BoT report still notes that the negotiated lending rates charged to prime customers remained unchanged hovering at an average of 14 per cent.

However, on the flip side of things, banks’ interest rates on deposits inched up slightly in November last year. According to the BoT, the overall deposit of interest rate averaged at 6.80 per cent, a considerable increase compared to 6.64 and 6.74 per cent recorded in October last year and November 2020, respectively.

“Tanzania continues to experience substantial challenges from the Covid-19 pandemic and faces an ongoing urgent balance of payments need,” warns the International Monetary Fund (IMF).  With that acknowledgement, the IMF went ahead and approved US$372.4 million. The monies serve as emergency financial assistance and have been issued under the Rapid Credit Facility (RCF) terms.

The issued amount is equivalent to another support that was given to the country in form of repurchased non-concessional financial assistance that was issued under the Rapid Financing Instrument (RFI).  The IMF Executive Board approved the disbursement of US$372.4 million under the RCF for Tanzania.  “This RCF disbursement allows Tanzania to take full advantage of its new eligibility to borrow from the Fund fully on concessional terms,” notes the IMF.

It further explains that the RCF disbursement will continue to help address Tanzania’s urgent balance of payment needs arising from the Covid-19 pandemic. The money will also serve to provide Tanzania with the concessional resources needed to take measures to mitigate the severe socio-economic impact of the pandemic.

Tanzania’s economy is heavily dependent on the tourism industry and as yet, the IMF cautions that travel services receipts and travel arrivals continue to remain below pre-pandemic levels.

“Due to the impact of the pandemic and the collapse in tourism in the wake of travel restrictions, growth reportedly decelerated to 4.8 per cent in 2020,” the IMF reports.

In the bigger picture of things, it is expected that the financing will revitalize confidence in development partners and thus encourage their continued support. This brings us to the matter of legitimate expenditure of the funds for the right purpose.

In this regard, Tanzania has pledged to publish expenditure reports of the RCF money and conduct a post-crisis audit of all pandemic-related spending.

“The Covid-19 pandemic continues to take a toll on the Tanzanian people and economy. The authorities are implementing a comprehensive response—Tanzania Covid-19 Socioeconomic Response Plan (TCRP)—to mitigate the health and socioeconomic effects of the pandemic. The macroeconomic outlook depends on its successful implementation, but downside risks remain,” commented IMF Deputy Managing Director and Chair Bo Li.

Recently, Tanzania’s Members of Parliament urged the government to give tax breaks to businesses as part of the country’s Covid-19 economic response plan.

“Alternatively, the government is encouraged, through the Central Bank, to scrap interest on loans so that borrowers do not fall into default,” it was reported.

The development comes as Tanzania’s business sector takes a blow from the global slowdown. Businesses are operating below the pre-Covid-19 period; huge loan defaults are expected from both large corporations as well as small and medium-sized companies.

Despite the Central Bank’s issued stimulus package for commercial banks, things are still tough for businesses. In response, the private sector via the Tanzania Private Sector Foundation (TPSF) is moving to save large borrowers from mega defaults that would in effect ripple throughout the economy.

On the other hand, the Bank of Tanzania (BoT) issued guidelines to help banks address the risk of growing Non-Performing Loans (NPLs). However, with the devastating effects of Covid-19, even good borrowers are now defaulting, and the private sector wants the government to step in.

The government has responded in kind. Recently a high-level business and investment forum was held with the government being represented by Tanzanian Prime Minister Kassim Majaliwa.

During the meeting, Tanzania Private Sector Foundation (TPSF) chairperson, Angelina Ngalula, suggested that the government establish some 20 strong companies and place them under TPSF.  The Foundation would like to see the government provide these industries with tax and other regulatory concessions to make them competitive.

The PM pledged to work on the suggestion but pointed out that the government already has plans underway to set up industries in each of the country’s 23 regions.

“The plan is at the final stages before it materialises.  It has already passed through the Permanent secretaries and Presidential instrument committee.”

It yet remains to be seen whether the government will place its planned industries under the TPSF or whether they will be state-run organizations. Should the TPSF vision work, the goal is to follow in the footsteps of China where government-funded private sector entrepreneurship fostered unprecedented economic growth.