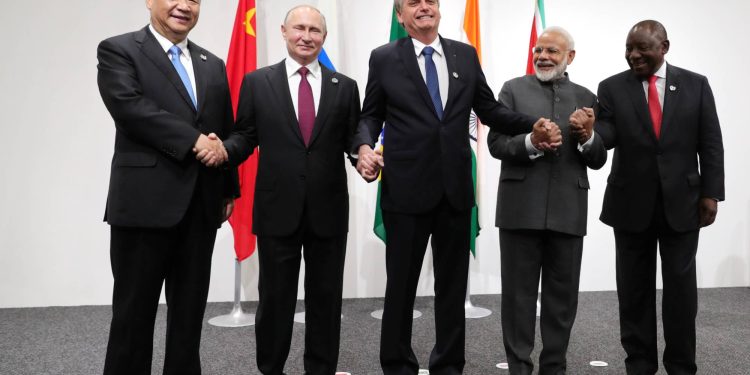 The leaders of the BRICS nations meet at the group’s summit in Osaka in June 2019. Concerns are India might pull out of the group over tensions with China. (Photo/ Reuters)

Russia’s invasion of Ukraine has upended the existing world order and with it the global energy, production, distribution, and financial systems. Russia and China are openly challenging the Pax Americana. But the question of what the next world order will look like remains wide open.

On February 24, 2022, Russia launched a large-scale invasion of Ukraine, its neighbour to the southwest, marking a dramatic escalation of the Russo-Ukrainian War that began in 2014, Putin announced a “special military operation” in eastern Ukraine; minutes later, missiles began to hit locations across Ukraine, including the capital, Kyiv. What does this mean to Southern Africa?

According to an article by Project Syndicate dated June 23, 2022, many Africans are convinced that the war in Ukraine is not their problem to solve. But failure to restore peace and end the disruption to food and energy supplies will likely result in mounting political instability and social tension in the region. That will in turn hurt Africa’s chances of charting its path to a more prosperous and sustainable future.

The conflict triggered by Russia’s invasion has complicated the challenges and sources of stress already facing Southern Africa. Some are economic, including debt problems and excessive dependence on raw material exports. Southern Africa is also struggling to manage the adverse effects of climate change and food insecurity.

Further against this background, the Ukraine war has intensified socioeconomic pressures in Africa. Because many African countries depend heavily on food imports, the new spikes in global prices of agricultural commodities and oil caused by the conflict have left the poor increasingly vulnerable, with the sharp decline in Ukrainian grain exports aggravating food insecurity in many regions.

Project Syndicate added that another consequence of the war in Ukraine is a paradigm shift in how Africans view the rest of the world. The African public is becoming increasingly aware of the difference between the resources that traditional international cooperation partners are allocating to fight hunger, security threats, and COVID-19 in Africa, and what they are mobilizing to support Ukraine.

When the United Nations General Assembly voted overwhelmingly on March 2 to condemn Russia’s invasion of Ukraine, African countries accounted for almost half of the 35 abstentions.

In all about half (26) of the 54 member states in Africa chose the path of neutrality in some form.

According to an article by The Guardian Nigeria dated July 14, 2022, the conflict has put many African leaders in a difficult position and attempting to forge a neutral position. South Africa’s neutrality frustrated EU and Ukrainian diplomats who nonetheless recognize its special role with Russia via the BRICs (Brazil, Russia, India, China, and South Africa) grouping of middle-income countries.

Aljazeera published on May 24, 2022, when German chancellor Olaf Scholz visited South Africa, President Cyril Ramaphosa said that “bystander countries” were suffering due to sanctions against Russia.

According to an article by Mail and Guardian dated July 15, 2022, Leaza Jernberg, an independent international relations researcher in Johannesburg, said South Africa’s position risked alienating key trading partners like the US and most European countries.

“The Brics (Brazil, Russia, India, China, and South Africa) position is to remain neutral but this is essentially refusing to condemn human rights abuses and that is morally grey and problematic.”

Jernberg said the Russian invasion was a violation of international law, which the South African Constitution committed to upholding.

“At the heart of SA foreign policy is a historic contradiction: we won’t side with America or former colonialists. But rather South Africa separates our diplomacy from our trade reality. The Bretton Woods Institutions of global governance have solidified around power blocs and there is a push for South Africa to embrace the developing world and the Global South. This push for global governance reform makes sense in the context of India, for example, but many would say Russia is both colonialist and imperialist.

“Do China and Russia represent the underdog or just themselves? For South Africa to be shunning its key trading partners and risk alienating them by siding with a human rights abuser is problematic.

“It might be useful, and a political necessity given internal ANC factional struggles, to rally around Russia, given its struggle history with the USSR, but it doesn’t make sense economically. South Africa needs to reassess its national interest, particularly economically, and ensure it truly informs its foreign policy.”

Morden Diplomacy in an article published June 24, 2022, described BRICS’s success as moderate since its establishment. The group has a combined population of 3.23 billion and its combined GDP is more than US$23 Trillion. Historically, the first meeting of the group began in St Petersburg in 2005. It was called RIC, which stood for Russia, India, and China. Then, Brazil and subsequently South Africa joined later in February 2011, which is why now it is referred to as BRICS.

According to an article by Japan Times dated July 15, 2022, the BRIC acronym, created by then Goldman Sachs economist Jim O’Neill in 2001, was initially impelled by a vision of economic cooperation. The four (later five) emerging markets’ shared and compatible perspectives on issues of global governance reform certainly provided a raison d’eter.

According to experts, other potential candidates include Bangladesh, Egypt, the United Arab Emirates, and Uruguay who joined the BRICS New Development Bank last year. In addition, analysts point out that events held on the sidelines of the BRICS foreign ministers’ meeting involved representatives of Indonesia, Kazakhstan, Nigeria, and Thailand.

Several countries are already on the list as potential new members. The final position is that this geopolitical configuration is in exploratory phases, undoubtedly meant to bring a new axis of Russia-China but the inclusion of Mexico, Indonesia, and Turkey has its strategic baggage according to Morden Diplomacy.

Although some African countries may benefit from a shift in global markets away from Russia due to the crisis, the short-term potential impacts on economic livelihoods are worrying while the implications for pan-African solidarity and adherence to multilateralism are increasingly uncertain according to The Guardian Nigeria.