Zambia plans on scrapping US$2 billion projects to reduce debt

The projects were cancelled as part of an effort to restructure the country's debt.

According to the Ministry of Finance, Zambia is cancelling projects worth more than two billion dollars that were financed by commercial loans in order to limit the danger of amassing more non-concessional debt.

As stated in the statement, the decision to cancel the projects was made as part of a more extensive process to restructure the country’s debt. The report also stated that the government expected its bilateral creditors to provide adequate financing assurances in order for an International Monetary Fund (IMF) programme that is currently being discussed to be approved.

The Ministry of Finance released its budget for the medium term on July 9th, indicating that the cancellations will lower the danger of amassing more non-concessional debt; however, no additional information was disclosed at the time of publication. This decision was made as part of a more significant strategy to restructure the nation’s debt, which also includes discussions to modify the law in order to improve the oversight that parliament has on borrowing.

In accordance with the report on the budget, “In line with the 2016 Constitution Act No. 2, The Loans and Guarantees (Authorisation) Act is being repealed as part of the government’s efforts to improve the legal framework surrounding the management of the public debt. in order to, among other things, increase Parliamentary oversight on borrowing and enhance transparency in public debt management.”

According to the findings of the study, “Zambia’s economic growth programme has been directed by the National Vision,” which states that the nation’s goal is to achieve the status of a prosperous middle-income country by the year 2030.

It is anticipated that Zambia’s economic growth will decelerate to 3.1 per cent this year, down from 3.6 per cent in 2021, primarily as a result of a forecast reduction in a product derived from the agricultural industry.

According to the statement, the government also has plans to keep reserves equal to the amount of import cover needed for three months. 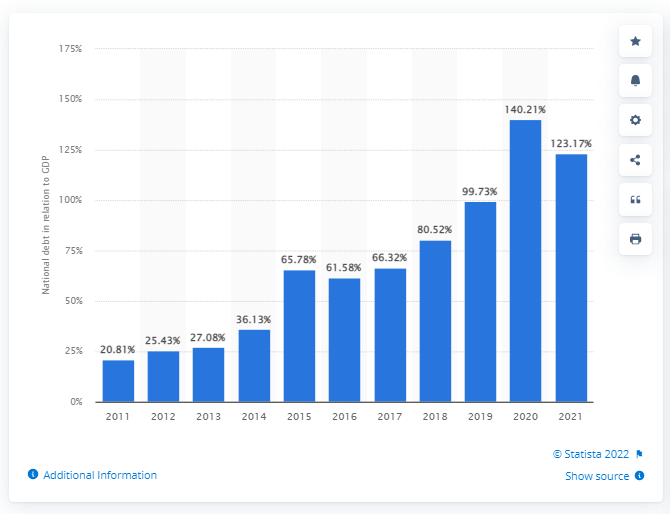 In the year 2020, Zambia became the first nation in the Covid-19 era to default on its obligations. At the end of the year 2021, its total external debt was US$17.27 billion, of which China held US$5.78 billion. Currently, it is engaged in discussions with its creditors and the IMF to find a way to climb out of its current financial predicament and reduce its reliance on debt.

There are several other countries besides Zambia that owe a significant amount of money to China. It is believed that African countries’ debts with the country make up a third of the total obligations owed to private lenders who are not Chinese. Over a third of the debt repayments for the year, 2021 were transferred to Chinese lenders by Angola, the Republic of Congo, Cameroon, Djibouti, Ethiopia, and Zambia, respectively.

Deborah Brautigam, a researcher with the China Africa Research Initiative (CARI), states in a report that “…it cannot be overstated how exceptional Zambia’s debt burden is in comparison to that of other countries that have taken Chinese loans. There have been a variety of concerns regarding Chinese “debt traps,” but it is important to emphasise that Zambia is an outlier when it comes to the weight of Chinese loans.”

At the end of the year 2021, its total external debt amounted to US$17.37 billion, of which China was responsible for US$5.78 billion. It has reached out to the International Monetary Fund and other creditors for assistance.