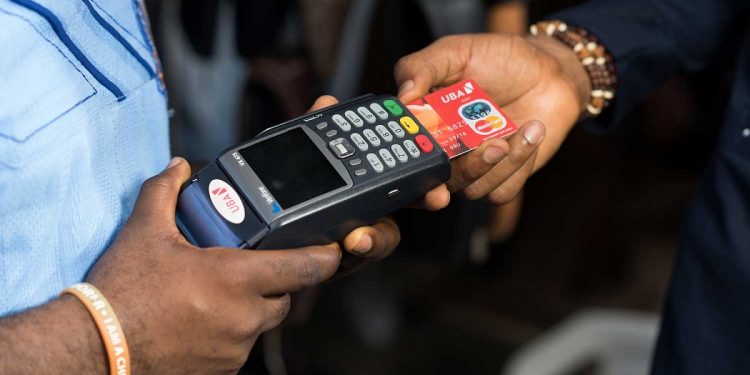 A POS. Digital currency is part of the central bank acknowledging the need for digital payment and digital delivery of financial services. [Photo/UBA]

African countries must tidy-up smart strategies for e-commerce without which they will lose out considerably on the promise of the Fourth Industrial Revolution (4IR).

Lethargy and bureaucracy in implementing favourable policies for e-commerce may cost the continent, a scenario which is unacceptable.

As Africa goes live with the African Continental Free Trade Area (AfCFTA) in January 2021, it is more compelling to boost intra-African trade through online transactions.

E-commerce, which is the monetary exchange of goods, services and information products via the Internet, will be a key component of phase two negotiations of the AfCFTA.

The internet, or lack thereof, is one of the binding constraints to e-commerce not only in Central Africa but in the entire continent.

In Central Africa, though, there is a great sense of political will from some member States in the sub region, such as Gabon which has a 50.32 general internet penetration rate. The upside for e-commerce from this penetration is that 54 per cent of Gabonese shopped online last year putting them ahead of Rwanda where 39 per cent of citizens did similar transactions.

Unfortunately in the rest of the sub region, the figure was less than 30 per cent.

Mamadou Bal, an Economist at ECA’s Central Africa Office, argues that things ought not to be so. He says that if anything the AfCFTA and the movement to building forward better from a delicate Covid-19 experience offer the potential to change the context in which industries in Central Africa produce and export, notably through integrated value chains that make use of clean and resource-efficient production technologies.

It goes without saying that electronic means of buying and selling offers an opportunity to integrating higher and profitable value chains.

One downside of e-commerce is hidden costs. The practice of payment-upon-delivery for items whose orders are placed online generates hidden costs for e-merchants related to transportation and storage of undelivered items.

To address this, other entrepreneurs need to find a solution to this in Africa to broaden the value chain around classical e-commerce.

According to David Mudilo, an e-entrepreneur from the Democratic Republic of Congo (DRC), one way out is to develop a network of relay points for electronically ordered products. He adds that various smart payment options such as the use of bank cards, mobile money and cash collected at the relay points could be pooled.

Giuseppe D’Aronco who is the ICT policy economist at ECA’s Central Africa Office says that with these kinds of logistical and systemic difficulties that have resulted in the closure of some e-commerce giants in Central Africa such as AfriMarket, Cdiscount and Jumia, the continent must build its own e-commerce model which takes into account its unique needs and operating modes that are different from those elsewhere.

E-commerce is a key enabler of trade in services which African countries should actively promote even as they scale up the profits of small and medium-scaled enterprises (SMEs) and IP-dependent sectors.

To address constraints to e-commerce in Africa, some of the key strategies include increasing connectivity to and the reliability of internet access.

The continent should also seek to develop Africa-specific digital payment systems and promoting investment in e-commerce services and start-ups.

In addition, countries should formulate and adopt solid e-commerce regulations. Only Rwanda has full legalization in the entire African continent.

Another strategy would be mending logistics which accompany e-commerce, such as mail distribution, parcel storage systems and delivery routes.

The sector is projected to create three million jobs for the youth by the year 2025.

To achieve this, action by African leaders and international partners on an agreed set of priorities could ensure e-commerce thrives and becomes a force for sustainable development.

The Boston Consulting Group (BCG) projects that the online market place in the consumer goods sector will create around 58 per cent of jobs both directly and indirectly while mobile services will generate 18 per cent of the jobs. The travel and hospitality sector which has been hardest hit by the Covid-19 pandemic will create 9 per cent of jobs.

On the larger scale of things, the Economic Commission for Africa has launched an online trading platform to facilitate trading between buyers and suppliers when the AfCFTA agreement kicks off.

The African Trade Exchange (ATEX) is a business-to-business e-commerce platform that will not only improve cross-border trade but also provide businesses with quality products from verified African suppliers efficiently.

ATEX was created to provide a marketplace for buyers and suppliers where they could transact and buy good quality products from the continent based on the AfCFTA rules.

UNCTAD Secretary-General Mukhisa Kituyi has emphasized the vital role of the free trade area in boosting growth opportunities across the continent.

He added that how the AfCFTA facilitates the revival and growth of African small businesses will be key to its success as an engine for Africa’s economic renaissance.

The AfCFTA is making things easier by harmonising Africa’s 107 unique land borders with varying regulatory standards making for a frustrating experience for those who need to do business across the continent.

With the consolidated trade, the continent offers greater market opportunities at lower business costs which is attractive for those who would want to tap into these prospects.

The opportunities and challenges of e-commerce in Africa interplay with other policy issues and AfCFTA members have to remove obstacles in the digital space with synchronized regulatory approaches that check the fracturing of African states by technology giants.

Read: Where, how to invest in Uganda’s e-commerce