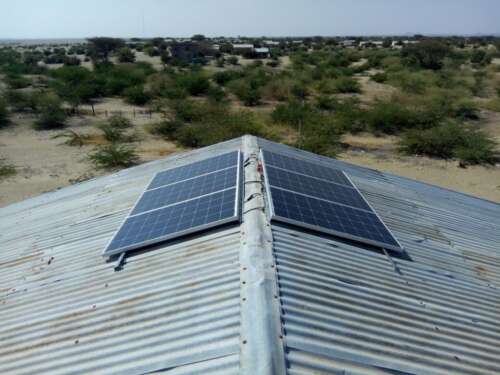 Solar panels on a roof. Africa receives several hours more of bright sunshine in a year than any other continent making it one of the sunniest places on the planet. [Photo/Sollatek]

Civilization is what enables societies and cultures to advance and an idea is a difference between a thriving civilization and one that has been left behind.

Years ago, anthropologist Margaret Mead said that the first sign of civilization in ancient culture was a thighbone that had been broken and then healed.

Unlike what many would consider being civilisation today, as the development of tools from the early ages as has been taught in schools, Mead’s explanation that a broken leg in the animal kingdom meant death does make sense.

In the African wild, if an animal breaks its leg, it dies since it cannot run from danger, “get to the river for a drink or hunt for food. You are meat for prowling beasts. No animal survives a broken leg long enough for the bone to heal,” notes Mead.

She added that societies are at their best when we serve others and thus become civilized.

In the case of Africa, civilisation in modern-day terms has been the building of skyscrapers, driving big cars and being able to move from point A to point B faster than it was decades ago.

However, this kind of civilisation has left many behind meaning that societies are not serving each other condemning the continent to a ‘backwardness’ of sorts.

The continent is well endowed with natural resources but without innovation, Africa continues lagging behind thus open to exploitation and manipulation.

The reason the continent has remained in the dark is that there is not adequate power to run the economies sufficiently meaning that people have lost not only livelihoods but also their ideas since they cannot be implemented without power.

Electricity remains one of the biggest hindrances to fully exploit Africa’s potential. Through innovative ideas to provide this power, Africa can create better solutions for its people.

Currently, only about 43 per cent of Africa’s population has access to electricity, a number that is half the global access rate of 87 per cent, according to the 2019 World Bank World Development Indicators; Demographic and Health Surveys; Multiple Indicator Cluster Surveys; National Surveys.

As such, Africa needs to catch up with the rest of the world, but with a growing population which is projected to double to nearly 2.4 billion by 2050, access to electricity is a critical challenge that needs to be urgently addressed.

Solar energy could be a viable alternative to satisfy the continent’s electricity needs, as currently most of Africa’s energy comes biomass and fossil fuels.

African countries like Kenya have already started on this path rolling out an Sh15 billion (US$ 150 million) off-grid solar electricity programme in partnership with the World Bank.

The Kenya Off-Grid Solar Access Project seeks to improve energy access in 14 counties with low electrification rates where 250,000 households and more than 800 public facilities will get access to electricity.

This programme is part of the government’s broader target of attaining an additional 1.9 million solar-based connections through the Kenya National Electrification Strategy (KNES) that was launched in 2018 as Kenya trots towards achieving universal access by 2022.

Read also: Solar power to light up 70 million households and reach over 3000 MW in Africa by 2022

Susan Pendame, an energy expert from Kenya, who has written a paper titled, ‘Africa Beyond Covid-19: Solar energy in Africa’ says there is a solid case for solar to aid Africa build back better in the post-Covid-19 era.

Pendame adds that there is tremendous potential for renewable energy mainly due to the huge possibilities using solar energy technologies.

Pendame argues that the global Covid-19 pandemic has intensified the need to expand reliable energy to not only power healthcare, but also to enable remote work and online learning. Because of this, solar energy has emerged as the preferred solution due to the ease of deployment.

However, challenges remain in rolling out solar energy sources across Africa.

When it comes to leveraging the African Continental Free Trade Area (AfCFTA) to accelerate sustainable development, Pendame suggests that African governments should promote investment in solar energy, trade in energy through the integration of power grids, allocation efficiency, technology and innovation sharing as well as facilitating affordability of electricity for low-income households.

Continent-wide, countries need to harmonise and coordinate energy regulation; cooperate on investment, intellectual property rights and competition policy; expand the movement of skilled labour and create a dispute resolution mechanism as part of the AfCTA.

Pendame believes that the potential for trade in energy under the AfCFTA provides an excellent opportunity to achieve sustainable energy development on the continent.

For perspective on why Africa is best placed to tap solar energy, the continent enjoys reliable sunshine more than any other.

Africa receives several hours more of bright sunshine in a year than any other continent making it one of the sunniest places on the planet. Despite this, the large solar potential and penetration of solar power in Africa’s energy sector remains very low.

The Africa continent is desperately short of electricity yet the solar potential is enormous with great progress made in the development of solar energy markets since 2018.

The five countries are now the continent’s fastest-growing solar energy markets but this may change if Nigeria, Angola, Botswana or Mali increase their investments in the sector.

Solar remains one of the best bets for energy generation on the continent but it will supplement other sources like hydropower, geothermal and fossil fuel which remain the major sources. Wind energy is also another source of energy that countries should look at to end energy poverty on the continent.

I have 10 years of experience in multimedia journalism and I use the skills I have gained over this time to meet and ensure goal-surpassing editorial performance. Africa is my business and development on the continent is my heartbeat. Do you have a development story that has to be told? Reach me at [email protected]ge.africa and we can showcase Africa together.