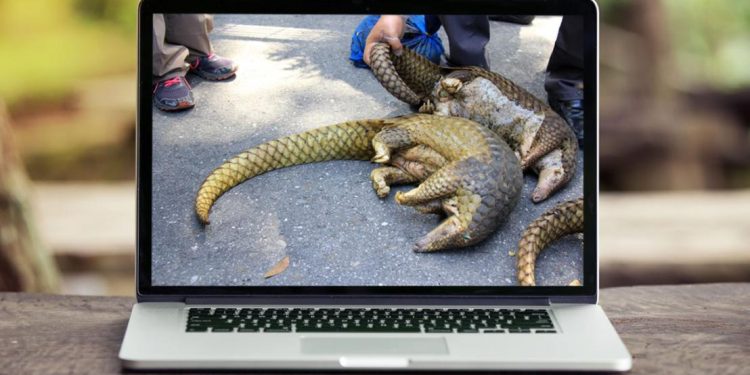 As people attempted to avoid physical contact due to COVID-19 , traffickers shifted from large-in-person shipments to smaller deals facilitated through internet markets or the dark web

Earlier this year, the illicit wildlife trade in Africa took an extraordinary turning point. Deep in the Democratic Republic of the Congo’s tropical forest, a giant pangolin – an endangered animal species with plate-like scales that could weigh up to 30kg – was abducted by rebels who sought a US$500 ransom.

The Virunga jungle, home to lions, nearly extinct silverback gorillas, and anti-government militias, has earned a reputation as one of the world’s most dangerous parks. Seven park rangers were killed by armed groups in the area last year. A rebel attack killed 13 rangers the previous year.

Two weeks of exchanges with the pangolin’s captors ended in radio silence, according to Adams Cassinga of Conserve Congo. This DRC-based nonprofit combating wildlife trafficking engaged in the rescue operation.

“We attempted to persuade them to come out, but on the 14th day, there was a disagreement between this group and another armed group, and they were forced to go into the deep jungles, and that is how we lost communication. I believe it was eaten,” reiterates Adams Cassinga.

Congo is the epicentre of the illicit African wildlife trade. The Congo basin rainforests provide a safe refuge for some of the world’s most endangered species, including pangolins, elephants, and gorillas.

“The DRC is truly Africa’s last frontier for wildlife since we have species and subspecies that have yet to be found due to insecurity, armed groups, and inaccessibility within the forests,” Cassinga adds.

It is also the beginning point for a trade route for animals transported to the Middle East and Asia. It is home to the world’s second-largest tropical rainforest after the Amazon, running over six central African countries.

“[The DRC] is definitely an origin point for a lot of wildlife trafficking because there are a lot of iconic species there, including primates and other species,” says Jean Fleming, communications manager at the Pan African Sanctuary Alliance (PASA), a group of 22 wildlife sanctuaries from 13 countries.

According to a World Bank analysis, illegal wildlife trafficking is worth about US$7 billion to US$23 billion worldwide each year. “It’s a multibillion-dollar industry — not only from Africa but from all around the world, with Africa playing a significant role.” “It must be regarded as such,” Fleming argues.

The clandestine African wildlife trafficking has reduced after the introduction of Covid-19. As people attempted to avoid physical contact as the epidemic progressed, traffickers shifted from large-in-person shipments to smaller deals facilitated through internet markets or the dark web.

Read: Saving the Serengeti: Humans or Wildlife – Who Comes First?

The internet has evolved into a worldwide marketplace for the exotic animal trade, offering anything from large cats to parrots, from Facebook pages to independent platforms and the dark web.

According to Didi Wamukoya, an environmental lawyer and the African Wildlife Foundation’s director of Counter Wildlife Trafficking (AWF), the unlawful transaction, like other criminal trades, migrated online during Covid. Furthermore, while trading online, you may only ship tiny amounts of stuff via customs. So the quantity of ivory being transferred is probably in very tiny numbers, so you are not seeing the tremendous tonnage you saw in 2015.

According to Adams Cassinga of Conserve Congo, the digital slice of the illicit wildlife trade accounts for just 5-10 per cent of the transaction since many African poachers and traffickers do not have access to computers, the internet, or the necessary technical skills to sell their illegal commodities. It is impossible to sell nine tonnes or one tonne of ivory online; only little products carved from ivory may be sold online. It is also unrealistic that one could sell 250 parrots online; one can only sell one or two.

The pandemic Influences poaching and smuggling

Flights grounding and foreign travel prohibitions imposed by Covid also disrupted commerce and resulted in the accumulation of animal shipments. Since customers from other nations could not quickly move about, there was a problem with transportation and travel documents. They were frantic for the money they had put in their stock, producing the expected profit.

According to USAID’s Counter Animal Trafficking Digest in 2021, Southeast Asia, the final destination for many African wildlife goods, had a 50 per cent decrease in smuggling in 2020.

However, the trend does not apply to all species. The trafficking of young apes reached an all-time high during the epidemic era. During the pandemic, poaching for bushmeat increased across Southern Africa and worldwide as economic hardship weighed down on already impoverished local communities. At the same time, lockdowns emptied parks of tourists and rangers on patrol, incentivizing poachers, according to a report published in January 2022 by the UK Foreign, Commonwealth, and Development Office.

In general, poaching has grown because people need food; it has increased because people have lost employment, and many more individuals have entered the trade. However, because there is a lot of stock lying around, it also works against trafficking.

Conservationists are increasingly employing new technology against poachers as the battleground shifts. Investigators collect DNA from rescued animals in sanctuaries and utilize geo-location technologies to pinpoint their origins with high precision.

It is possible to grasp what these trafficking pathways look like by looking at where they ended up. The main trade route is from rangeland areas in West and Central Africa, such as Liberia, the Democratic Republic of the Congo, and Sierra Leone, down the continent through South Africa to destinations in the Middle East and Asia. There are many purchasers in China, for example, who are either developing private collections or establishing zoos.

As per the AWF, up to 2.7 million pangolins are smuggled into Chinese markets each year. Most of the demand is for their scales, which are said to assist new mothers lactate in traditional Chinese medicine, although their flesh is beloved in local cuisine.

Pangolins, native to Africa and Asia, has been thrust into the worldwide spotlight for their initial alleged role in transferring Covid from animals to people — a relationship that was never confirmed – and are now threatened.

According to the World Wildlife Fund, the condition of the eight pangolin species ranges from vulnerable to highly endangered. The IUCN Red List of Threatened Species classifies two of them as critically endangered.

According to Wamukoya, the AWF collaborates with governments throughout the continent to improve detection through measures like sniffer dogs at airports and information gathering training for customs agents to halt traffickers in their tracks. However, prosecuting wildlife traffickers for their crimes can be a difficult, if not impossible, task.

“Wildlife crimes are unusual – it’s difficult to prosecute them in court because often the evidence provided in court is live animals, so trials drag on for obvious reasons,” Wamukoya explains. Meanwhile, animals must be repatriated since they cannot be kept in holding cells awaiting court hearings. “Wildlife crimes are complicated because, if someone is exporting baby apes from the DRC to Kenya and are caught, how do you ensure the baby ape returns to its home in the DRC?” she wonders.

As wildlife traffickers expand their operations online, the foundation must adapt to match sophisticated new trade trends. The AWF’s cybercrime investigations team teaches local law enforcement agencies about digital evidence collecting, such as mobile phones that connect suspects to accomplices and crime sites, which aids in obtaining a conviction.

“We are collaborating with tech businesses to patrol who is selling wildlife items on the dark web, and this intelligence is captured online and shared with law enforcement,” Wamukoya explains.

AWF is also striving to raise awareness among local law enforcement authorities about the gravity of such crimes and their consequences down the value chain.

“We strengthen the capacity of rangers on the ground and the community and investigators and prosecutors, and we sensitize the judges because it is a full cycle of law enforcement from the boots on the ground to the courts,” Wamukoya explains.