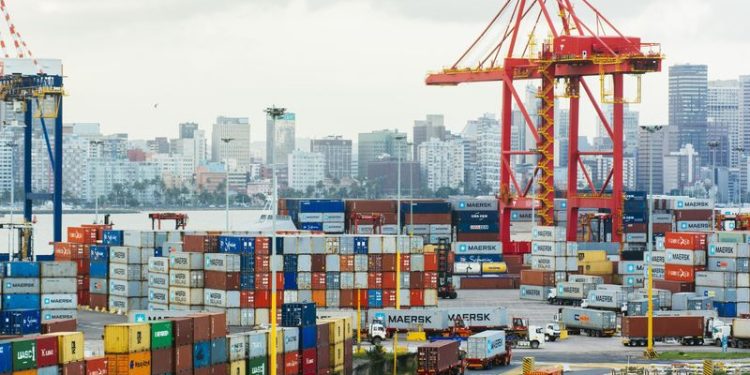 A ship-to-shore crane stands above containers on the dockside at the Port of Durban. (Waldo Swiegers/Bloomberg)

Calming the storm: What needs to be done in Africa’s seaports improve efficiency

Corruption, capacity issues, inefficient handling time and poor security are some of the issues African ports face despite remarkable opportunities in maritime shipping

With over 90 per cent of the continent’s imports and exports transported by sea, Africa still makes up just a small percentage of global trade. In order to realise its growth ambitions, Africa must now take advantage of the economic potential of its ports and shipping sector.

According to a 2018 report by PricewaterhouseCoopers (PwC) a 25 per cent improvement in port performance could increase GDP by 2 per cent.

Let’s survey some African ports set to become regional shipping powerhouses and what needs to be done to achieve this.

Mombasa port serves as the hub port for East and Central Africa, facing stiff competition from Dar es Salaam port, Tanzania, only managing to stay on top due to better hinterland connections and larger throughput than Dar es Salaam.

According to the PwC report, the Mombasa port, and by extension East Africa is the least developed market in respect of hub port development, including investments within the ports and a lag in involving the private sector to provide efficient operations.

In 2018, a “massive systems failure” and huge congestion in Mombasa paralysed the port’s activities, highlighting some of the problems facing Kenya’s maritime strategy.

This is despite improved performance over the years where in 2007, Toyota Tsusho secured a $64m (Ksh7.56B) contract from the Kenya Ports Authority to supply 16 cranes – four gantry cranes for quayside operations, in addition to 12 transfer cranes for yard operations – for the Phase 2 development of Mombasa Port as part of a collaboration with Mitsui Engineering & Shipbuilding. The cranes were to ensure efficient port operations, as well as facilitate an increase in rapid cargo handling operations to reduce vessel lay time.

If the private sector could take up a few berths at the Port of Mombasa, build them afresh and equip them with better facilities, it could save the government from taking a loan to refurbish. Once revamped and with the private sector operating them, it would mean more ships calling on the port to supply Kenya and the region as well as more jobs for Kenyans and a concession fee for the government that can in turn be used for public service delivery.

Since its construction in 2009, the Doraleh Container Terminal (DCT) has been a major catalyst for growth, in this small country that plays a key role as a Western ally in the volatile Horn of Africa region. The port sits on two of the busiest shipping lanes in the world and services the wider region, including some of the world’s fastest-growing economies.

Where Djibouti’s old port lacked in water depth and capacity, DCT makes up for in a water depth of 18m for larger vessels and can handle 1.6 million TEUs.

Durban, the largest and best-performing port in sub-Saharan Africa, is rated number one in PwC’s hub attractiveness index for the continent, with Cape Town and Ngqura ranking just behind it.

Statistics from Transnet National Ports Authority Cargo, a South African government organisation show that in 2017 the port catered for 9,821 vessels and processed 22,785,7619 metric tons of cargo.

At the same time, the port remains one of the most expensive in the world and only achieves 75 per cent of the efficiency expected from a major global hub, lagging far behind other world hubs like Rotterdam and Antwerp. The roads around the port also suffer from crippling congestion, according to Transnet, with drivers regularly waiting for hours and sometimes days to access the port.

Nigeria has the biggest market in Africa generating about 71 per cent of cargo throughput in West Africa. The Port of Lagos is Nigeria’s primary seaport on Nigeria’s more than 850km coastline and a maritime area of 46,000km2.

Like all African ports, it faces problems with efficiency. In October 2016, the Lagos Chamber of Commerce and Industry published an analysis on the country’s ports that claimed trillions of Naira in revenue is lost every year due to inefficiencies and infrastructural deficits at the nation ports.

The other major issue facing Nigeria’s maritime sector is security with piracy and other illegal activities, a major barrier for investors.

Over the past few years, Nigerian Maritime Administration and Safety Agency (NIMASA) says it has been collaborating with the country’s military and navy to improve intelligence, surveillance and marine security. In late 2012, the agency set up a Maritime Guard Command, to prevent oil theft and reduce levels of piracy. “The Gulf of Guinea is a major area of concern, consistently dangerous for seafarers, and signs of kidnappings are increasing.”

Dakuku Peterside, head of NIMASA, said the federal government has also approved an additional $186m (Ksh 22 billion) for an Integrated Waterways Surveillance and maritime security initiative to be run by the Nigerian navy, marine police and army “with the sole objective of operationally eliminating piracy and criminality on our waterways.”

Further, The Nigeria’s Maritime Industry Forecast 2019-2020 indicated that Nigeria is planning to spend over $2.5 billion in the maritime sector for the next four years on vessels financing to increase other business opportunities to encourage investors.

The Port of Abidjan, built in 1950, is the economic hub of the Ivory Coast, generating around 80 per cent of its customs revenues. It is also one of West Africa’s leading commercial ports, serving landlocked countries including Mali, Burkina Faso and Niger.

The port’s poor infrastructure has struggled to cope with the growth in cargo traffic. The country’s 2010-2011 post-election conflict also allowed other regional ports to capture a slice of its traffic.

An expansion project in Abidjan was launched in late 2015 to widen and deepen the canal leading to the main port. Work is also underway to build a second container terminal to increase the port’s cargo capacity and host larger, new-generation ships at a cost of $1.2bn.