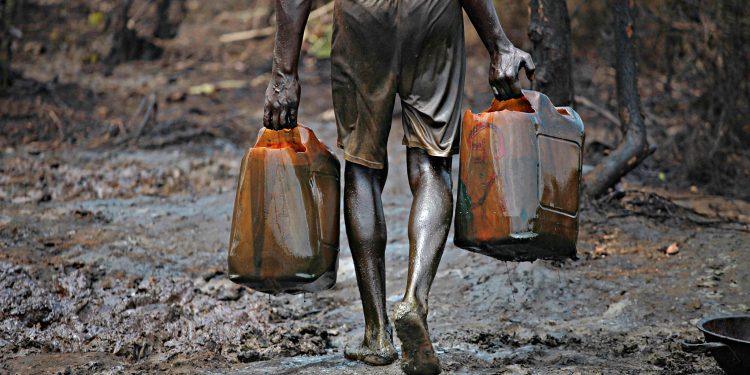 A man works at an illegal oil refinery site near river Nun in Nigeria's oil state of Bayelsa November 27, 2012. Thousands of people in Nigeria engage in a practice known locally as 'oil bunkering' - hacking into pipelines to steal crude then refining it or selling it abroad. The practice, which leaves oil spewing from pipelines for miles around, managed to lift around a fifth of Nigeria's two million barrel a day production last year according to the finance ministry. Picture taken November 27, 2012. Source: REUTERS/Akintunde Akinleye - The Exchange

by Giza Mdoe
in Extractive and Energy, Oil&Gas
0
Share on FacebookShare on LinkedIn

The year started out as very promising, Nigeria’s crude oil and gas export sales revenue hit a record USD434.85 million in January. That was apparently the best the sector would do this year. It is estimated that the country’s oil revenue is likely to decline by 80 percent this year.  In fact oil export volume is projected to fall to 1.3 million barrels per day.

For a country where oil represents 90 percent of the country’s exports, 30 percent of bank credits and 50 percent of fiscal revenues, an 80 percent fall (USD17 billion) spells doom not only for the sector but the economy as a whole.

The prediction is made by the country’s high profile and member of the Economic Advisory Council, Mr. Bismarck Rewane in a report titled: “Making Hay While the Sun Has Set.”

“The federal government is struggling with the reduction and elimination of subsidies without sparking social unrest. Tax collection, mobilisation and prudent management of tax revenues will be topmost priorities,” he said.

Nigeria’s total external debt has risen to USD 31 billion and is expected to rise to USD36 billion with more lending from multilateral companies. Debt service burden is already in excess of 96 per cent of independent revenues and terms of trade will also deteriorate sharply this year.

At the moment, export prices have dropped down 60 percent and while import prices are not doing so bad, they are nonetheless also down 15 percent.

The economist’s rather gloom report also cited the country’s external reserves as likely to free fall by a staggering USD33 billion. However, he did predict that there will be an upside to the external reserves due to inflow of the International Monetary Fund (IMF) loan to combat effects of Covid-19 but all in all, the country has very high vulnerabilities.

While noting that the month of April was grounded for most Nigerians due to the lockdown in most states as part of measures to halt the spread of the COVID-19, he said it was also to strike a balance between saving lives and livelihoods.

The economic advisor said due to the Covid-19 global pandemic, all sectors of the economy have been affected and the country witnessed panic buying coupled with supply chain disruptions that forced consumer prices to the ceiling.

“Hotels, restaurants, cafes, factories, and markets were all affected. The Purchasing Managers’ Index in April crashed to 45.8points as output sub-index fell to 40.50 points, lowest since 2017. This reflects the effects of the lockdown and poor access to raw materials,” he said.

How Covid-19 is speeding up the digital economy in Africa

According to the economist, there is a chance of a second wave of COVID-19 which, if does occur, would trigger more stringent lockdown measures and that would in turn derail any economic recovery efforts that would have been achieved.

“There will be a continent-wide recession in 2020 as real GDP growth will slide into negative territory (-1.6%) in 2020, before recovering in 2021 on the success of efforts to contain the virus. Oil dependent economies like Nigeria and Angola will be badly hit by the twin shocks of COVID-19 and dwindling oil prices. The region will experience weak labour markets in 2020 as a structural and cyclical unemployment spike. The informal sector will be the worst hit,” he warned.

Mr. Rewane advised that Africa may need a “Marshall Plan modeled after post-World War 2 US aid package to European countries.”

Already, the covid-19 pandemic has caused widespread unemployment across all sectors. The worst hit are the logistics, tourism and hospitality sectors. There are numerous cases of defaulting bank debtors which is causing worsening case of Non Performing Loans (NPLs).

The agriculture sector in Africa has been badly affected. Most African countries rely on agriculture for domestic food and for export as well. As a result of the pandemic, exports have dropped drastically and it is unclear how European Markets, on of Africa’s largest importer of agro products will recover from the Covid-19 impact.

Oil dependent countries like Nigeria have been devastated as price of crude oil plummeted week after week in the wake of the pandemic. Already production was so high such that the markets were saturated and so when the pandemic hit, prices were forced to drop and even as suppliers sought to reduce production, it was just too little too late.

Countries and investors have been advised to buy oil in bulk and stock up as the prices are at a record low. There are of course numerous political agendas behind the fall in oil prices with allegations facing Russia. The country has stalled reduction of oil even though the market is overwhelmed with supply against all time low demand.

By keeping high levels of production, Russia is alleged to be forcing US small producers out of businesses because they just cannot keep producing at these low market prices. However, while the US producers are the target other small producers like Nigeria are also facing the music. The lower oil prices drop, the harder economies like Nigeria take a hit.

The changing face of South Sudan

Gold price slightly down against dollar