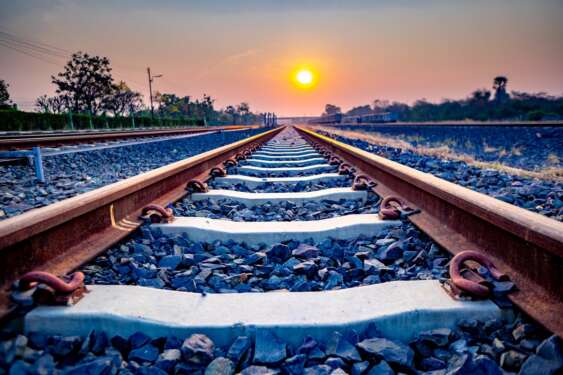 A railway line. China is the top investor in African infrastructure and it will play a key role in building transport corridors supporting the AfCFTA.

While the African Continental Free Trade Area (AfCFTA) has become a reality, developing robust infrastructure is crucial to its operationalisation and success.

For maximum benefit, member states to the trade agreement must be connected physically and digitally through hard infrastructure and connected in the harmonisation and coordination of processes through soft infrastructure.

The pact connecting 1.3 billion people across the 55 African countries with a combined gross domestic product (GDP) valued at US$3.4 trillion faces huge challenges that need quick responses. These responses range from the dependence of African economies on commodity production and exports, the lack of diversification which has caused a mismatch between supply and demand, tariffs and non-tariff barriers (NTBs), inefficient transport infrastructure and poor trade logistics to high-security risk among others.

To make it work, these challenges require huge direct funding which is estimated at US$130 billion to US$170 billion annually. With targeted investment in infrastructure development and logistics, the continent will manage to boost value addition, timely intra-African movements and trade.

With the election of Nigeria’s Dr Ngozi Okonjo-Iweala to head the World Trade Organisation (WTO), her vast experience in trade negotiations and her anti-corruption track records are timely inputs with the trade agreement which is still in its infancy.

Confirmed on February 15 as the WTO’s Director-General, Okonjo-Iweala has taken up her post on March 1 initially for a term that runs until August 2025. She is the first woman and the first African to lead the global Geneva-based trade body.

Her trade negotiations will pay dividends in ensuring that the continent attracts the billion-dollar investments needed for the delivery of good quality infrastructure.

As it is, the continent’s railway network remains grossly underdeveloped which limits the potential of transporting goods in bulk.

According to the African Union (AU), the entire African railway network is estimated at about 75,000 km currently. This means that there is 2.5 km of rail for every 1000 km². In comparison, other regions and the world average 23 km for every 1000 km².

Read: A business of success in East Africa

The railway connectivity is so limited that 16 out of the 54 African nations do not have railway lines or sections of international lines.  Additionally, national railway networks in sub-Saharan Africa are limited to the specific countries with most networks independent of each other.  Interconnected railway systems can only be found between Burkina Faso-Cote d’Ivoire, Senegal-Mali and Ethiopia–Djibouti.

When it comes to road connectivity, Africa is still lagging behind but mega projects are ongoing in a bid to open up the continent. The biggest driver has been the Chinese-driven Belt and Road Initiative (BRI).

The massive investment which cut across a number of continents is an ambitious project which is opening up the world – especially Africa – for China.

By seeking improved infrastructure development and acceleration of the economic integration of countries along the route of the historic Silk Road, the transcontinental BRI is a long-term policy and investment programme unveiled in 2013 by China’s President Xi Jinping.

Until 2016, it was known as One Belt One Road (OBOR). The official outline for the BRI was issued on March 28, 2015, by China’s National Development and Reform Commission (NDRC), the Ministry of Foreign Affairs (MOFA) and the Ministry of Commerce (MOFCOM) with authorization of the State Council.

The official outline indicates that the BRI aims to promote connectivity of Asian, European and African continents and their adjacent seas while also establishing and strengthening partnerships among the countries along the Belt and Road.

Interestingly, the BRI puts a major focus on emerging markets made up of countries in Asia, Eastern Africa, Eastern Europe and the Middle East. Currently, 71 countries are taking part in the initiative whose combination represents more than a third of the world’s GDP and two-thirds of the world’s population.

For Africa, the BRI could be a silver lining for the AfCFTA which is opening up the continent.

A reliable network of transport systems integrating Africa will open up the continent to unexplored opportunities touching on many aspects of the continent’s economic heritage.

Logistical support systems including roads, rail and air transport will play an important role in ensuring that Africa does not miss the opportunities presented by the trade agreement.

On the continent, some of the most notable road projects include the 225 kilometres Trans-Sahara highway from Assamakka, north Niger at the main border crossing with Algeria to Arlit, the uranium capital of Niger, which will connect Algeria to an additional four other countries including Nigeria, Tunisia, Mali and Chad.  On completion, the highway will enable unbroken road transportation over 5,000 kilometres from Algiers to Lagos, Nigeria.

There are several other road projects which are expected to open up the continent and which have the potential to catapult the economy which has lagged behind for decades.

On air transport, Africa remains one of the most expensive continents to travel in by air. It is more costly to travel between African countries by air than it is flying out of the continent.

The latest African Airlines Association (AFRAA) report shows that African governments are taxing the sector to death stymying growth prospects.  Experts say affordable air transport will develop Africa’s tourism and trade sectors that are the backbone of the continent’s economies.

The report notes that air transport is vital to the implementation of AfCFTA to develop trade among African states. In comparison to Europe and Asia, data collected between 2015-2017 shows that intra-Africa trade is extremely low at 15.2 per cent. Europe stands at 50 per cent while Asia’s is at 64 per cent.

By opening up the skies, the continent could see increased revenues from tourism which generated US$38 billion in earnings from 67 million international tourists who visited the continent by air in 2018 (World Tourism Organization).

With China backing the AfCFTA saying that it is a ‘win-win’ solution the Asian giant argues that free trade and multilateralism are key foundations to the global system. China will definitely benefit through trade and the building of infrastructure to facilitate this trade.

China is the top investor in African infrastructure and as the continent opens up, Beijing will play a key role in building transport corridors that support African industrialisation and the processing of its raw materials.

While questions are being asked regarding trade with China which is Africa’s biggest single-largest trading partner, the reality is that the continent is in a complicated relationship with the Chinese since the logistics infrastructure has to be developed if the continent is to realise its full potential.

Dealing with the aflatoxin Menace in East Africa