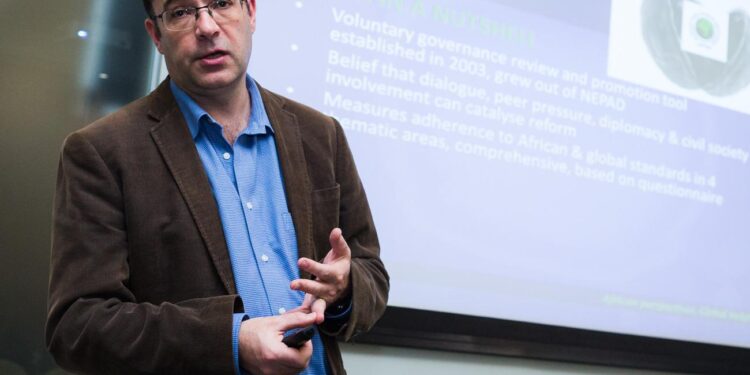 Steven Gruzd who heads the Russia-Africa Research Programme at SAIIA in South Africa. He says Africa is a busy geopolitical arena, with many players operating. [Photo/SAIIA]

For Russia, Africa is a “geopolitical arena with many competing players”

During the past decade, several bilateral agreements between Russia and individual African countries were signed.

As preparations are underway for the second Russia-Africa summit planned for 2022, African leaders, politicians, academic researchers and experts have been discussing several aspects of the current state of Russia-Africa relations.

They, most often, compare it with a number of foreign countries notably China, the United States, the European Union, India, France, Turkey, Japan, and South Korea that have held such gatherings in that format with Africa.

Some have convincingly argued that Russia has moved away from its low-key strategy to vigorous relations, as shown by the first symbolic Russia-Africa summit in the Black Sea city of Sochi in October 2019. Russia and Africa adopted a joint declaration, a comprehensive document that outlines the key objectives and necessary tasks that seek to raise assertively the entirety of relations to a new level.

Long before the summit, at least, during the past decade, several bilateral agreements between Russia and individual African countries were signed. Besides, memoranda of understanding, declaration of interests, pledges and promises dominated official speeches. On the other side, Russia is simply invisible in economic sectors in Africa, despite boasting of decades-old solid relations with the continent.

Undoubtedly, Africa is opening up new fields of opportunity. The creation of the African Continental Free Trade Area (AfCFTA) provides a unique and valuable opportunity for businesses to access an integrated African market of over 1.3 billion people with a GDP of over US$2.5 trillion. It aspires to connect all the regions of Africa, deepen economic integration and boost intra-African trade and investment.

Despite existing risks, challenges and threats, a number of external countries continue strengthening their economic footholds in Africa and contribute enormously towards the continent’s efforts to achieve the Sustainable Development Goals (SDGs).

Russia has to upgrade or scale up its collaborative engagement with Africa. It has to consider seriously launching more public outreach programmes, especially working with civil society to change public perceptions and the private sector to strengthen its partnership with Africa. In order to achieve this, it has to surmount the challenges, take up the courage and work consistently with both private and public sectors and with an effective Action Plan.

In this exclusive interview with Steven Gruzd, Head of the African Governance and Diplomacy Programme at the South African Institute of International Affairs (SAIIA), discusses a few questions, highlights existing challenges and passionately offers some progressive suggestions regarding Russia-African relations.

Steven Gruzd also heads the Russia-Africa Research Programme initiated this year at SAIIA, South Africa’s premier research institute on international issues. It is an independent, non-government think tank, with a long and proud history of providing thought leadership in Africa. Here are the interview excerpts:

What are your appreciations and fears for Russia returning to Africa?

Africa is becoming crowded, with many old and new actors actively involved on the continent. Apart from EU countries, China and the US, we have players such as Iran, Turkey, Israel, the UAE, Japan and others. So Russia’s renewed interest in Africa does not happen in isolation. It, of course, seeks to build on Soviet-era ties, and several African leaders today studied in the USSR or the Soviet sphere of influence.

Russia has tended to focus on niche areas such as weapons sales, nuclear energy and resource extraction, at a much smaller scale than China. Many leaders are welcoming the attention of Russia, but some remain wary of Russia’s hidden motives and intentions. Russia’s dealings are not transparent and open compared to China.

The shadowy world of private military companies such as Russia’s Wagner Group is causing concern in unstable countries like the CAR, Libya and Mali. So, in fact, there is a kind of mixed picture, sentiments and interpretations are also varied here.

How would you argue that Russia engages fairly in “competition for cooperation” in Africa?

Africa is a busy geopolitical arena, with many players operating.

Russia has to compete against them and distinctively remain focused on its efforts. Russia welcomes diplomatic support from African countries, and unlike the West, it does not demand good governance or advocate for human rights reforms.

Russia likes to portray itself as not interfering in local politics or judging African countries, even though there is mounting evidence that it has been involved in meddling in elections in Africa through disinformation, fake news and attempting to exploit fault lines in societies through social media.

Do you think, to some extent, Russia is fighting neo-colonial tendencies, as shown in Guinea, Mali, CAR and Sudan? Does it imply that Russia supports military leaders in Africa?

Russia uses the rhetoric of anti-colonialism in its engagement with Africa, and that it is fighting neo-colonialism from the West, especially in relations with their former colonies.

It sees France as a threat to its interests especially in Francophone West Africa, the Maghreb and the Sahel.

Russia has invested resources in developing French-language news media, and engages in anti-French media activity, including through social media. I think Russia has its own economic and political interests in countries like Guinea, Mali, CAR and Sudan, even if it uses the language of fighting neo-colonialism. It explicitly appears that Russia supports several undemocratic African leaders and their regimes.

Some experts have argued that Russia’s diplomacy is full of bilateral agreements, largely not implemented, and a gamut of pledges and promises. What are your views about these?

I would largely agree that there is a divide between what has been pledged and promised at high-level meetings and summits, compared to what has actually materialized on the ground.

There is more talk than action, and in most cases down the years, mere intentions and ideas have been officially presented as initiatives already in progress. It will be interesting to see what has been concretely achieved in reports at the second Russia-Africa summit scheduled for late 2022.

From the above discussions so far, what do you think are Russia’s challenges and setbacks in Africa?

Africa is a crowded playing field. Russia does not have the same resources and approaches as China, France, the UK or the US, so it has limited impact. The language barrier could be used as an excuse, but Russia has the great possibility to leverage into the Soviet- and Russian-trained diaspora.

On the other hand, Russia feels it is unfairly portrayed in Western media, so that is another perception it seeks to change. It can change the perception by supporting public outreach programmes. Working closely with the academic community, such as the South African Institute of International Affairs and similar ones throughout Africa, is one potential instrument to raise its public image.

In places like Mozambique and the CAR, the Wagner Group left after incurring human losses – does Russia have the staying power?

As it prepares to hold the second Russia-Africa summit in 2022, what could be the expectations for Africa? What to do ultimately with the first Joint Declaration from Sochi?

As already mentioned, there needs to be a lot of tangible progress on the ground for the second summit to show impact. It is worth reiterating here that African countries will expect more debt relief and solid investment from Russian businesses.

In terms of political support at places like the UN Security Council, there is close interaction between Russia and the African States, but as recent research by SAIIA shows, not as much as assumed. See this.  The relationship has to, however, deliver and move from words to deeds.

In conclusion, I would suggest that Russia has to take up both the challenges and unique opportunities and attempt to scale up its influence by working consistently on practical multifaceted sustainable development issues and by maintaining appreciable relations with Africa. And African countries likewise have to devise viable strategies for engaging with Russia.