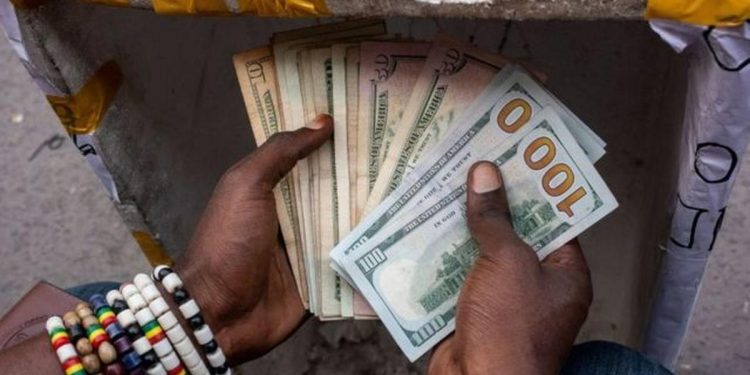 According to CBK data, foreign currency bank deposits reached a record high of Sh891.5 billion in June, up from Sh825.50 billion in May. [Photo/Business insider Africa]

As per data provided by the Central Bank of Kenya (CBK), the total value of foreign currency bank deposits in Kenya reached a new all-time high of Sh891.5 billion in June, up from Sh829.50 billion in May.

A record number of wealthy individuals and businesses moved a total of Sh63 billion more into dollar accounts during the month of June as they sought to secure the value of their investments in advance of this week’s elections.

As per data provided by the Central Bank of Kenya (CBK), the total value of foreign currency bank deposits in Kenya reached a new all-time high of Sh891.5 billion in June, up from Sh829.50 billion in May. This represents the most significant monthly increase in deposits ever recorded.

The rise of 63 billion shillings in dollar deposits, equivalent to 2.1 billion shillings daily, is evidence that wealthy individuals and large corporations looked for a secure location to store their riches in the wake of the uncertainties surrounding the elections.

In a nation where violent demonstrations on the streets and violent fights are typically only seen after the announcement of election results, the elections have thus far been mostly quiet.

In the extremely close race, the Independent Electoral and Boundaries Commission (IEBC) has not yet revealed who was in the lead.

The additional Sh63 billion in dollar deposits reflected an increase of 7.6 per cent and demonstrated that the rise was not caused by a surge in the dollar value relative to the shilling, which lost 1.7 per cent against the US currency in June.

“The surge is significant, so I would not ascribe it to the weakening of the shilling, but rather to hard currency conversions as we went into the elections with the risk of a prolonged election in mind, as was seen in 2017,” stated Churchill Ogutu – Economist IC Group.

“The spike also occurred at the same time that the Federal Reserve increased interest rates, so it’s possible that some speculators were trying to position themselves to profit from the strength of the dollar.”

Following the complete reopening of the economy, which has unleashed pent-up demand for consumer and capital goods, there has been a significant increase in the local market for dollars this year. This increase is in accordance with the booming imports that have followed.

The global tremors caused by Russia’s invasion of Ukraine increased the price of imported commodities, raising the demand for dollars.

The United States Federal Reserve increased interest rates by 0.75 percentage points for a second straight time in July to combat inflation, which contributed to a stronger dollar and a decline in the value of the Kenyan shilling. Since the year 2000, this was the highest increase in the interest rate by 0.5 percentage points.

As a result of the rate hikes, there is typically an increase in the movement of dollars into safe havens in the developed world. This leads to a rise in the demand for the greenback, which in turn brings the value of the local currency down.

During economic uncertainty, dollars are in high demand from various corporations, banks, and investors. It is the world’s reserve currency and is generally considered the safest.

In the wake of estimates indicating that the shilling would continue to be worth less when compared to the currency of the United States, it is common practice for investors to stockpile dollars for speculative trading.

Those who currently have dollars would be in a position later to convert their money into shillings at a profit or would not incur conversion losses while importing goods because of the anticipated fall.

According to the data compiled by several media outlets, Raila Odinga, the opposition leader, and Deputy President of Kenya, William Ruto, are running neck and neck in the presidential race.

The Independent Electoral and Boundaries Commission (IEBC) reported that approximately 65 per cent of registered voters participated in the parliamentary, local, and presidential elections. This represents a significant decrease from 2017, when voter turnout was nearly 80 per cent.

The final conclusion from the IEBC is anticipated to be released within the next several days, despite the fact that legally, it has up to a week.

Kenya's stock market up US$268 million amid presidential election contest